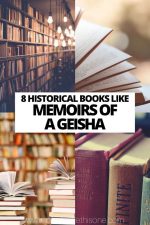 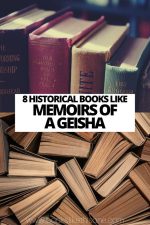 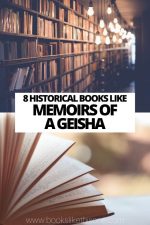 Are you looking for more books like Memoirs of a Geisha that delve lyrically into the past, and offer new or alternate perspectives on historical events? Then look no further than the exquisite novels listed below.

Set in Japan during World War II, we meet young Chiyo Sakamoto who is sold into Kyoto’s entertainment district at the tender age of nine years old. The novel follows her journey to becoming a geisha – a role that’s neither as easy nor as glamorous as it would at first appear.

Chiyo or as she is renamed, Sayuri, begins by performing demeaning tasks like cleaning the boarding house after all the other girls and it is only when she is considered truly worthy does her geisha training officially begin. Sayuri has to battle other girls for the attention of wealthy men and for freedom as her virginity is quite literally auctioned off to the highest bidder.

Like Arthur Golden’s literary debut which portrays some turbulent truths behind Japan’s cultural heritage, the other titles below shed new light on some of the world’s most notable, cultural and atrocious historical events revealing there are always more than one side to every story.

Diana Gabaldon’s Outlander series of books quite literally spans decades worth of historical events from 1743 through to the 1960s (and counting) offering readers a magical retelling of the past.

Starting in 1945, we meet Claire Randall who is on a second honeymoon in Scotland after returning from the war where she was working as a nurse. During a walk, she stumbles through an ancient circle of standing stones and is mysteriously transported back to the Scotland of the year 1743, full of warring clans and lairds.

She meets a brave young Scottish warrior called James Fraser and falls helplessly in love with him and soon becomes torn between two men and her two lives. In a battle to stay alive and not alter the course of history, Claire must decide whether to remain a Sassenach (an outlander) or return to her own time.

So far eight books have been released with the next instalment currently in the making, if you like the portrayal of Chiyo’s dilemma torn between love, duty and desire in Memoirs of a Geisha, then you will enjoy Claire’s story and her struggles in Outlander too.

The Boy in the Striped Pyjamas, John Boyne’s heartbreaking novel like Memoirs of a Geisha, depicts the atrocities endured by Jewish people in concentration camps through the innocent, naive eyes of children and in doing so allows us to view the different sides of the same fence.

Bruno is the only son of a German officer and together with his family is relocated to Aushwitz or ‘Out-With’ as he calls it. Bruno is lonely and befriends another boy, Shmuel, who lives on the other side of the camp to him and who wears weird striped pyjamas like all the other people on that side of the fence.

Over the course of the novel, they become firm friends and Bruno commits to helping Shmuel reunite with his family who he can no longer find. Wearing a similar pair of stripy pyjamas that Shmuel has found for him, Bruno breaks through to Shmuel’s side of the fence but his innocent plan to help his friend sadly ends in horror.

The touching childlike perspective does nothing to soften the tragedy of the plot, The Boy in the Striped Pyjamas is beyond moving to read.

The Underground Railroad, by Colson Whitehead

The Underground Railroad earned Colson Whitehead a Pulitzer among many, many other worthy accolades. The novel is a perfect example of history rewritten as Whitehead rewrites the horrors endured by black people in America before the Civil War.

We are first introduced to Cora while she works on a cotton plantation in Georgia and follow her search for safety and freedom.

A search which takes her first to the Underground Railroad where she and her friend Caesar run away from the plantation together, then onto many different states evading all manner of horror along the way including Ridgeway an unabating slave catcher.

Cora’s journey leads her to encounter many worlds on her search for liberty and is in this way reminiscent of Gulliver’s Travels, except what Cora experiences, the terrors and disappointments were a plight that many endured and which some are still facing today.

The Underground Railroad is a harrowing and powerful rumination on our collective history perfect for any fan and reader of books like Memoirs of a Geisha.

The Constant Princess, by Philippa Gregory

Philippa Gregory is now considered quite the queen of historical fiction making any number of her novels a fitting choice for readers of historical books like Memoirs of a Geisha.

However I have specifically chosen her 2005 novel The Constant Princess for the similarities between Catherine of Aragon and Chiyo Sakamoto for like Chiyo, Catherine is torn from love endures and immense hardship before taking up her rightful place as Queen of England.

Born to Queen Isabella and King Ferdinand of Spain and destined to marry Prince Arthur of England (which for once is a match made in heaven) Catherine’s path to the throne isn’t as clear cut as fate would have her believe as Arthur dies tragically aged just fifteen years old.

Despite a deathbed promise that she would marry Arthur’s brother Henry, Catherine experiences years of treachery, poverty and battle before being able to prove she did not consummate her marriage with Arthur and taking up the reign of Queen of England, a position she more than earned.

If you like plots with a strong female lead defying the odds then look no further than The Constant Princess.

From Constant Princesses to Constant Gardeners in our next novel like Memoirs of a Geisha. Though the majority of books listed here are fiction, they have been inspired by actual events and the same is true for The Constant Gardener by the late great John le Carré.

When Justin Quayle, a British Diplomatic living in Nairobi, learns of his wife’s death in a remote part of Africa, he begins investigating and unearths a truth far more shocking than that of her death. Quayle’s wife had discovered that a pharmaceutical company were trialling new drugs on local people in Africa without their knowledge or consent under the guise of AIDS testing and medication.

Quayle follows the trail of corruption which shockingly leads him a little too close to home as he learns just how far people will go to cover up their wrongdoing.

Though not historical in the same sense as a lot of the titles here, fans of the first-person perspective and memoir-like narrative of Memoirs of a Geisha will enjoy these aspects of The Constant Gardener too.

Geisha, a Life, by Mineko Iwasaki

Though Golden’s Memoirs of a Geisha is a fictional memoir, he interviewed Mineko Iwasaki as research and is said to have based some of his plot on stories she told him in confidence. Geisha, a Life is her story and is the only biography to make it on this list.

Mineko Iwasaki is said to be one of the most successful geisha’s of her generation, speaking tenderly of her experience as a geisha 25 years in the making.

From leaving her home at five years old to learning the formal customs and what it means to be a geisha, Iwasaki enchanted and entertained kings, princes, wealthy and well to do businessmen until she decided to retire and marry aged 29, a decision which prompted the decline in geisha culture.

She writes beautifully of her experiences providing invaluable insight and a rare glimpse into Japan’s cultural component, therefore if you like books like Memoirs of a Geisha because of a fascination with Japan then you are sure to be captivated by Geisha, a Life too.

The Secret Life of Bees, by Sue Monk Kidd

Our next book similar to Memoirs of a Geisha explores our connections with family and the strength and power of female community, it is Sue Monk Kidd’s award-winning novel The Secret Life of Bees.

A coming-of-age novel which follows 14-year-old Lily Owens, whose life is framed around her mother’s sudden and mysterious death. Living now with her abusive father, Lily looks to Rosaleen, their household’s black maid as a sort of mother figure.

Tired of her father’s violent outbursts and of the racist closed-minded townsfolk, Lily and Rosaleen make a break for a town called Tibourn little knowing it or the three black beekeeping sisters that they are taken in by, hold the secret to her mother’s past and her demise.

Set in South Carolina in 1964, The Secret Life of Bees also dissects religion and exposes the prejudices and unjust treatment which led to the Civil Rights Movement, a truly absorbing read!

Already read this book? Check out our list of more books like The Secret Life of Bees!

The Red Tent, by Anita Diamant

So far on this list of books like Memoirs of a Geisha, we have covered the Holocaust, medieval Britain, racism, different wars, Scottish clans among other historical events and now we tackle religion in The Red Tent which broadens the story of Dinah.

Dinah is betrothed to the Prince of Shechem whom she loves and is happy to marry, but in a murderous rampage, he is killed by two of her brothers. Distraught and heartbroken, a pregnant Dinah escapes her family finding solace in Egypt.

Dinah only receives a small mention in the Book of Genesis with chapters mostly focusing on her father Jacob and his many sons. Told from her perspective we gain an insight as to how women in biblical times were treated; the traditions, the turmoil, with the titular tent referring to the refuge where woman had to remain when they were menstruating or giving birth.

In The Red Tent, Anita Diamant offers a valuable, refreshing retelling about women in the bible and like the aforementioned The Secret Life of Bees mediates on women, our connections and life.

Though some of the stories played out in the novels above can be uncomfortable to read at times and even make you wonder why are we memorialising such heinous events from our collective past.

However, ignoring them doesn’t mean they didn’t happen nor that they will be erased, it is by reading historical books like Memoirs of a Geisha that we think, grieve and aspire to be better and not make the same mistakes again…

Are you looking for more books like Memoirs of a Geisha? Have any recommendations that didn’t make the list? Let us know in the comments! 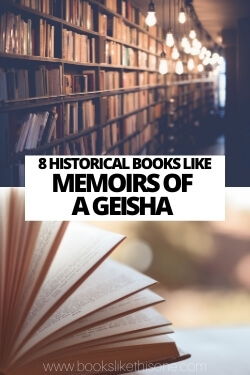