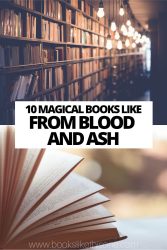 Are you searching for more books like From Blood and Ash?

Like many fantasy novels, in From Blood and Ash, our heroine finds herself being unwillingly proclaimed the ‘chosen one’. At birth, Poppy was chosen as the Maiden meaning she cannot touch or speak to anyone except a select few.

Poppy’s Ascension is growing nearer and nearer but she would rather fight against the supernatural creatures that attack her kingdom instead of being pronounced worthy by the gods.

A handsome guard, Hawke, enters her life and she soon finds her world crumbling around her. Stuck with a choice between duty and her heart, Poppy finds everything she ever knew changing.

Novels similar to From Blood and Ash have strong female main characters and tons of slow burn romance. If that’s your thing, look no further than this list for ten more similar books.

These Violent Delights, by Chloe Gong

When the two gangs show signs of uncertainty when a darkness begins to shroud the city, Juliette and Roma must set aside their differences for the survival of both their gangs and the city.

For a book like From Blood and Ash that explores a forbidden romance, These Violent Delights will satisfy your cravings.

A Court of Thorns and Roses, by Sarah J. Mass

This book is the first in a series that is still being published if you’re looking for a new high fantasy to get into!

Feyre and her family’s survival depends solely on her ability to hunt and bring food to serve on the table. She is an exceptional hunter however; winter has arrived and game is hard to come by.

When she sees a wolf pursuing a deer, she cannot help but take both for herself. However, that wolf was a faerie and Feyre must pay with her own life in exchange for taking its own.

Forced to live in the magical faerie kingdom, her captor hides behind a jewelled mask. Soon, her feelings for him turn from hate to something akin to love yet for the two to be together, she must break an ancient curse or lose him altogether.

Similar to From Blood and Ash, A Court of Thorns and Roses takes the reader on a magnificent adventure full of romance, danger and magic.

Have you already read this novel? Check out our list of books like A Court of Thorns and Roses!

A Deal with the Elf King, by Elise Kova

A standalone novel inspired by the myth of Hades and Persephone, A Deal with the Elf King is set in a world where three thousand years ago, humans and elves were at war. A treaty was formed to stop the elves hunting humans but now, a young woman is taken as the Human Queen.

Luella is her town’s only healer and her dedication is clear but when she is chosen by the Elf King as the next Human Queen, everything changes. Upon arrival to the magical land of Midscape, she realizes she is the kingdom’s only chance of survival as day by day it slowly dies.

Luella is forced to choose once again between the two places that her heart holds dear. For another swoon-worthy slow burn romance, you should pick up A Deal with the Elf King as your From Blood and Ash replacement.

At six years old, Theodosia watched her mother, the Fire Queen, die in front of her as her country was invaded by the Kaiser. Pronounced the Ash Princess, Theodosia, wears the title as a reflection of her life as a prisoner.

She is abused, attacked and mocked by those around her and finds herself hiding within herself just to survive. Captive within her own home, watching her citizens become enslaved, she realizes she must do something and reclaim her country when the Kaiser forces her to get blood on her hands.

With love triangles and compelling characters, check Ash Princess out for a book like From Blood and Ash.

Sorcery of Thorns, by Margaret Rogerson

Raised in the Austermeer’s Great Libraries, Elisabeth has grown up surrounded by magical grimoires locked up and rattling under chains. Everyone knows sorcery is evil and if let loose, these grimoires can transform into huge, grotesque monsters.

Elisabeth plans to become a warden of the libraries, expected to protect the realm from the awful danger the books impose. However, when the most dangerous grimoire is set free in an act of sabotage, Elisabeth is implicated in the crime and taken to the capital to pay for her offense.

Finding herself tangled up in a conspiracy, Elisabeth turns to sorcerer Nathaniel and his demon servant for help. The longer she stays with Nathaniel, the more she begins to question everything she knew about the kingdom and its history.

Similar to From Blood and Ash, Sorcery of Thorns is full of magic and monsters!

Agnieszka lives in a small village with a beautiful winding river and tall trees however, on the border lies the Wood. Only the wizard known as the Dragon can keep the Wood at bay and yet he asks another terrible price for his services: a young woman to be his servant for ten years.

The time for the Dragon to choose another woman is approaching fast and everyone knows it will be Kaisa, Agnieszka’s best friend. When the day arrives, however, it is not Kaisa who the Dragon chooses but Agnieszka.

Similar to books like From Blood and Ash, we see an unlikely pairing grow into something more in Uprooted.

This book is claimed as perfect for From Blood and Ash fans so look out for this title on bookstore shelves.

Lara is the princess of her homeland, trained to become the ultimate warrior. A neighbouring kingdom, the Bridge Kingdom, is thriving whilst all others surrounding it suffer. Lara is sent to King Aren of the Bridge Kingdom under the guise of a bride yet is preparing to bring the King and his kingdom to its knees.

However, the more she delves deeper into this war and the longer she lives within the castle’s walls, she’s unsure whether the Bridge Kingdom is the true enemy anymore.

As her feelings for the King turn from hate to passion, Lara must choose between her homeland and the land she has come to love.

Try The Bridge Kingdom for a passion and violence-filled book like From Blood and Ash.

For those of you who love The Little Mermaid, this fantasy retelling book similar to From Blood and Ash is for you!

Princess Lira is the most dangerous siren of all and has seventeen princes’ hearts under her belt to prove it. However, when things go awry and she kills one of her own, the Sea Queen transforms her into a human – the one thing sirens hate most.

Prince Elian sails the sea waters hunting humans’ one true enemy: sirens. With until winter solstice to deliver the Sea Queen Prince Elian’s heart, all Lira has to do is not fall in love. Easy, right?

To Kill a Kingdom is another forbidden romance, enemies-to-lovers novel for those of you who love mythology too.

This Woven Kingdom, by Tahereh Mafi

A new release, This Woven Kingdom, is the first in a trilogy full of more forbidden romance and inspired by Persian mythology.

We meet Alizeh, the long-lost heir to the Jinn kingdom who hides as a servant under the noses of royalty. There are prophecies foretelling the forgotten queen that would change the world forever but the Prince Kamran would never have imagined it was the quiet servant girl.

Books like From Blood and Ash have main characters destined for greatness and if you want more, try out This Woven Kingdom.

As one of the most popular young adult/adult fantasy writers out there, Sarah J. Mass gets two spots on this list.

Celaena is an assassin summoned to the castle from the prison she currently resides and is made an offer: defeat twenty-three warriors and killers in a competition in exchange for a position as the king’s champion.

However, something evil lurks in the shadows and one by one the competitors are being picked off. Celaena’s fight becomes a battle for the survival of not just herself but the entire world.

Books similar to From Blood and Ash engulf you in the beautiful world and characters and Throne of Glass does just that.

Lots of fantasy books take you on a magnificent journey through magical lands, meeting fantastical characters and the books on this list are no different. I promise if you pick up any of the above books, you’ll fill the hole in your heart that finishing From Blood and Ash left.

Are you looking for more books like From Blood and Ash? Have any recommendations that didn’t make the list? Let us know in the comments! 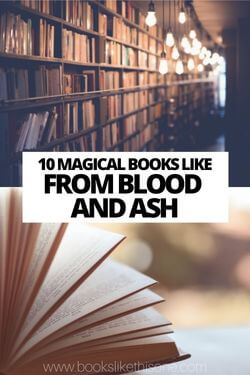