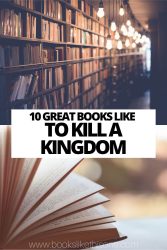 Are you searching for more books like To Kill a Kingdom?

Many books within the fantasy genre pull upon inspiration from popular folklore and fairytales, much like Alexandra Christo in To Kill a Kingdom. In this retelling of The Little Mermaid, we meet Princess Lira who is renowned for being one of the most dangerous sirens in the sea.

With seventeen princes’ hearts under her belt to prove her menacing skills, Lira has a reputation to uphold. However, when an accident occurs and she kills one of her own, she is banished onto the land and turned into the one thing sirens hate most: a human.

Prince Elian sails the seas hunting humans’ one true enemy, sirens, and Lira is tasked with delivering Elian’s heart to the Sea Queen by the winter solstice to return to her life under the sea. Now all she has to do is protect her own heart from the most dangerous of things… love.

An enemies-to-lovers and forbidden romance novel, this book is perfect for those who love both romance and mythology. However, if you have already read this one, you are probably looking for books similar to To Kill a Kingdom.

Continue reading to find ten books you should add to your shelf!

The Daughter of the Pirate King, by Tricia Levenseller

Alosa knows the seas like the back of her hand, something that naturally comes with being the daughter of the pirate king.

Sent on a mission by her father to retrieve an ancient map that leads to an incredible treasure, the seventeen-year-old pirate captain allows herself to be captured by her enemy pirates.

However, this is all part of her plan to allow her to search for their ship. The only thing standing in her way is the ship’s handsome first mate, Riden, who sees through her façade more than he lets on.

Full of pirates and all things fantasy makes The Daughter of the Pirate King the perfect alternative book similar to To Kill a Kingdom.

Already read this book? Check out our list of more books like The Daughter of the Pirate King!

Scarlett has always dreamed of participating in the magical performance of Caraval which she has heard of since she was a child. But Caraval is held far away from the tiny island she calls home.

Her dreams are further squashed when her cruel father arranges a marriage for her to an older and unkind man. However, Scarlett is whisked away when she finds a long-awaited invitation to Caraval.

When Scarlett and her sister, Tella, arrive, they are told that everything is an elaborate performance. So, when Tella is kidnapped and it is announced that the first to find her wins this year’s game, Scarlett finds herself jumping the line between reality and fantasy.

With five nights to find her sister before she disappears forever, Scarlett can’t let her own feelings get in the way of winning.

Full of mysterious characters and magic, Caraval, a beautifully crafted book like To Kill a Kingdom, will have you laughing and crying!

In Dance of Thieves, the Ballenger empire has ruled upon their own terms for years, creating fear even into neighbouring kingdoms who bow to their strength.

When the Ballenger patriarch dies leaving his son, Jase, to lead in his place, a young queen takes the opportunity to start the beginning of a new era, making her Ballenger enemy number one.

Kazi is a renowned former street thief who is sent by the queen to investigate the inner workings of the Ballenger empire. However, upon her arrival she finds there is more to Jase than she first believed.

Both with their own secret intentions, the pair play a stealthy game of cat and mouse whilst dancing around the growing feelings they have for one another.

This book similar to To Kill a Kingdom is full of enemies-to-lovers drama and provides the reader with plenty of wit and romance.

Realm Breaker follows a group of unexpected allies who must join forces in order to save their world from a widespread and unimaginable dark force.

Corayne an-Amarat, the daughter of a pirate, is visited in her small seaside town and told she is the last of an ancient bloodline and therefore, the only one who can save the universe from its pending destruction.

Joining the quest, they find others to help them along their way, building both friendships and hatreds. Full of fantastic world-building and multi-faceted characters, this Tolkienesque fellowship story will have you gripping the pages.

For more books like To Kill a Kingdom, definitely pick this one up!

Much like To Kill a Kingdom, Heartless is a fairytale retelling, only this time it is about the Queen of Hearts.

Considered one of the most eligible and desirable girls in all of Wonderland and a favourite of the King of Hearts, Catherine may just become the next queen.

However, her talents and dreams lie somewhere other than having a crown on her head; Catherine dreams of opening up a bakery with her best friend.

When Catherine meets Jest, a handsome yet mysterious court jester, she feels something in her stomach – an intense attraction that could be considered the first inkling of love.

But Catherine can’t offend the King or allow her mother to know she is jeopardizing her chance at Queendom so the pair enter into a secret courtship.

But sometimes fate has other plans and keeping secrets in the royal court has consequences.

Like most of the locals in her town, Penny is very aware of the story of the three sisters.

Two hundred years ago, three sisters were sentenced to death by drowning for witchcraft and now, every summer they return for their revenge. Luring young boys into the depths of the water, they enact their revenge by taking the lives of those who took theirs.

Only a day before the three sisters are meant to return, Bo Carter turns up in the village. With no idea of what he has walked in upon, the townspeople are scared and distrustful making Bo and Penny suspicious of one another.

With Penny holding the sight with the ability to see what others cannot, she takes it upon herself to make a choice: to save her own life or Bo’s.

For an eerily atmospheric and tense book like To Kill a Kingdom, pick up The Wicked Deep!

A Curse So Dark and Lonely, by Brigid Kemmerer

Another fairytale-inspired novel, A Curse So Dark and Lonely is a Beauty and the Beast retelling.

Cursed to relive the autumn of his eighteen birthday until he finds true love, Prince Rhen finds himself turning into a bloodthirsty and murderous beast over and over again. After killing his own family and destroying his home, he is left with no one but his best friend.

Desperate, Rhen takes to pulling random women from the streets of Washington, DC to fall in love with him after realizing no one in his own realm was willing to love him.

After trying to save another woman from what appeared to be a random kidnapping, Harper finds herself in a magical realm as a prisoner.

However, the more time she spends with Rhen, real feelings begin to grow and finally, there is hope for Rhen once again.

For readers who love a good enemies-to-friends-to-lovers trope including a heroine from our own world, A Curse So Dark and Lonely is the perfect book like To Kill a Kingdom.

In the novel Fable, it’s been four years since seventeen-year-old Fable watched her mother drown in a brutal storm and the next day, her father – who is also the most powerful trader in the Narrows – dumped her on an infamous island full of thieves and beggars and no food.

Adapting and learning to survive, Fable uses the skills her mother taught her to stay alive long enough to get back to her father and demand a place with him and his crew.

Enlisting the help of a young trader named West, Fable attempts to get off the island but soon finds West isn’t who he says he is and the dangers of her father’s business have only grown since she last saw him at thirteen.

This book like To Kill a Kingdom is full of pirates, secrets and atmospheric settings that will capture your attention.

The Mermaid, by Christina Henry

Based on the true antics of P.T. Barnum, The Mermaid follows Barnum’s search for a woman from the seas who has a tail for legs after hearing of an old romantic tale.

A fisherman who could never convince a woman to follow him to live on his rocky isolated island accidentally picks up a mermaid in his nets. When she sees the loneliness in his eyes, she stops her thrashing and sees through to his heart.

Spending a lifetime together, the old man grows old whilst the woman does not but stays with him nevertheless. This story travels from town to town until Barnum hears and is intent on finding the woman with a tail for legs.

Similar to To Kill a Kingdom with its magical and fantastical sea creatures, pick up this book for an entertaining and beautiful read.

House of Salt and Sorrows, by Erin A. Craig

Annaleigh lives a sheltered life in her manor by the sea with her parents and sisters.

Rumoured to be cursed by the gods after four of her sisters die in tragic accidents, Annaleigh becomes more suspicious that their deaths weren’t accidents after being plagued by visions.

Realizing her sisters are sneaking out to magical balls in beautiful gowns, she isn’t sure whether to stop or join them. Her own involvement with a stranger leads her closer to the truth and maybe even her own death.

An eerily beautiful tale of deception and death, House of Salt and Sorrows is a great book similar to To Kill a Kingdom.

Reading books can transport you onto a pirate’s ship or a beautiful castle and more settings full of magic, excitement and romance! Fantasy can help us escape our own reality and live a life we may never experience and the books I’ve mentioned above will definitely do this!

Are you looking for more books like To Kill a Kingdom? Have any recommendations that didn’t make the list? Let us know in the comments! 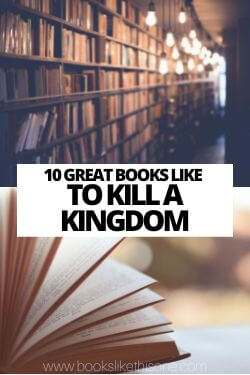