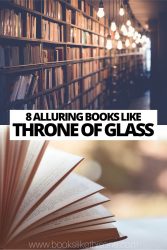 Assassins have always made for interesting character types in fiction. Books like the Throne of Glass series love introducing readers to a plucky, often traumatised character that winds up becoming a skilled killer. Celaena has captured the hearts of many young readers since Maas first introduced her.

However, if you’ve already cut, stabbed and sliced your way through Celaena’s journey, what other books like Throne of Glass are out there?

Finding a series like Throne of Glass isn’t as hard as you might suspect. The high fantasy/competitive tale of a young protagonist discovering their power is a popular theme with many readers.

In Red Queen we are introduced to a world divided by blood. If you’re born red, you’re a commoner. If you’re born silver, you’re basically untouchable and imbued with god-like superpowers.

Whilst it’s not hard to spot where Red protagonist Mare Barrow will end up, the joy lies within the story. Surrounded by people she hates? Check. Joins a resistance movement to help bring down the elite regime? Check.

Everything you like about Throne of Glass can be found here.

The Last Namsara, by Kristen Ciccarelli

The cold kiss of destiny lurks everywhere in The Last Namsara. Books like the Throne of Glass series revel in torturing their heroes as much as humanly possible.

Asha has grown up hearing about the legends of Namsara: the child of sky and spirit, along with the legend of Iskari: the child of blood and moonlight. Light and dark. Life and death.

Asha winds up bonded to an Iskari destiny, but when she is offered a chance to gain her freedom she wonders if there’s more to her than just death and darkness? The Last Namsara twists and turns its way through Asha’s journey with a cheerfully brutal aplomb.

Series like Throne of Glass are little without a lead character that readers can get behind. Rielle Dardenne decides to risk everything she knows to save a friend.

Accidentally revealing herself as one half of a pair of prophesied queens, Rielle is forced to undergo seven elemental magic trials. Endure, and she survives to become queen. Fail, and… well you can guess.

But that is not where the story ends. Skip forward a thousand years and Rielle’s story has become a fairy tale to Eliana Ferracora.

Eliana is a bounty hunter and is about to join a rebel captain and fight in a cosmic war that links Rielle and Eliana. Furyborn doesn’t just follow the standard ‘female-hero-discovers-hidden-power’ trope.

There is a lot more going on here and if you liked the Throne of Glass series, you will love Furyborn.

The Quiet at the End of the World, by Lauren James

Not every book on this list is aimed at a young audience. There are books like Throne of Glass for adults too, and The Quiet at the End of the World is a rich and absorbing choice for readers.

After a global virus has caused human infertility, Lowrie and Shen find themselves to be the youngest people on the planet.

Living in a small area of London amongst a kind but ageing community, they both mooch about looking for treasures and historical artefacts. That is until they discover a secret that threatens everything, leaving the pair with a horrible choice: who to save and who to sacrifice.

Crown of Feathers, by Nicki Pau-Preto

There are books like the Throne of Glass series that grab you by the neck, shake you about to ensure you’re paying attention, and then don’t let go until they’ve wrung all the energy from you.

Phoenix riders. Warrior queens. Sisters torn apart by war. Characters destined for vengeance. Sometimes the most entertaining stories are the ones we’re already familiar with.

They comfort us like a warm blanket on a cold day, and Crown of Feathers ensures you’re snuggled up tight before it whisks you away into a rich fantasy world of lies, heroes, sacrifice, magic, death and victory.

If you like the drama of Throne of Glass, you will be well served here.

A vengeful daughter. A world scorched by three suns that barely ever set. A school of assassins who can train the daughter to find and destroy the people who took away her family.

Welcome to Nevernight a story filled with political intrigue, secrets, lies and Mia Corvere the young woman determined to avenge the death of her family.

But Mia’s path isn’t going to be easy. Her father was executed as a traitor, and she is being hunted by the empire and the rebellion against it. Mia has her own skills though and weapons her hunters fear: she can speak to shadows.

If you’re looking for books like the Throne of Glass series, Nevernight is a thrilling series to look at.

We Set The Dark on Fire, by Tehlor Jay Meja

Books like Throne of Glass enjoy trying to provoke readers into thinking about their place in the modern world. We Set the Dark on Fire might seem a little ham-fisted in its approach to examining equal rights, but any examination of sexism and the damage it causes to us all is always welcome.

Daniela Vargas is top student at the Medio School for Girls. Medio is where women of high birth are trained to do one of two things: run their future husband’s household or raise his children.

Daniela has a secret though. Her whole identity has been forged by her parents who just wanted her to have a better chance in life.

Daniela’s fear of being discovered coupled with a request to spy for an equal rights movement makes We Set The Dark on Fire very engaging. I can imagine some cynics rolling their eyes and clenching jaws, but give this book a chance.

If you liked Throne of Glass, you will enjoy Daniela’s tale.

Planting the reader firmly back in high fantasy territory, Falling Kingdoms is a series like Throne of Glass that is filled with magic, politics, deadly alliances and more. Rhodes uses the roles of Princess, Rebel, Sorceress, Heir to slot her principle leads into, and it works well.

Cleo, Jonas, Lucia and Magnus are all fun to follow as they navigate betrayals, murders, alliances, love and more. Everything you enjoy about the Throne of Glass series is here. Whilst there are many cliches and tropes littered throughout, you can’t help but be swept along with the characters.

This is a perfect book to read if you’re off sick and just want to stay in bed and escape reality for a few hours.

Books like the Throne of Glass series come in all shapes and sizes. The ones we’ve recommended are merely the tip of the fantasy iceberg.

Are you looking for more books like Throne of Glass? Have any recommendations that didn’t make the list? Let us know in the comments! 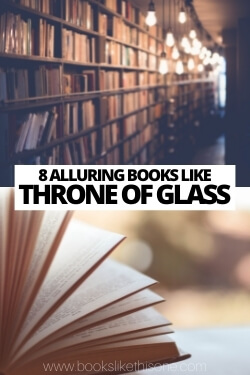