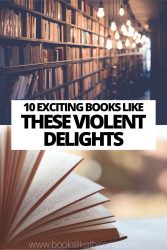 Books like These Violent Delights are jam packed with action, betrayal and angst as we explore fantastical lands and settings.

In this particular Romeo and Juliet retelling, we begin in Shanghai in the 1920s where two rival gangs named the White Flowers and the Scarlet Gang are in the midst of a bloody and brutal war.

We meet Juliette Cai, an eighteen-year-old former flapper, who has returned to Shanghai to step up into the role of heir to the Scarlet Gang.

On the opposing side, there is Roma Montagov who is the White Flower’s leader and also Juliette’s first love and first betrayal. The gangs’ rivalry is put to the back of minds when a strange darkness threatens to overcome not only the two gangs but also the entire city.

Juliette must set aside her hatred of Roma and his workers in order to work together to save everyone from a terrible fate. And maybe, along the way, she’ll get the closure she always needed. A forbidden romance that threatens the hierarchy of Shanghai, this book is the perfect thrilling read!

However, if you have already picked this one up and devoured it like I have, you may be looking for a read that will recreate that good book feeling! Well, look no further as I have come up with ten other titles that you will love!

10 Books Similar To These Violent Delights

What is better than a dark fantasy romance? A dark fantasy romance with a strong, empowered female lead! The Shadows Between Us let us indulge in a high fantasy setting and intense romance whilst reading about a well-written and independent protagonist like Alessandra.

Alessandra is a self-serving woman who isn’t afraid to use violence or her murderous intentions to get where she wants to be. Set with a plan to woo, marry then kill the Shadow King, she plans on ruling the six kingdoms all by herself.

But the palace intrigue is much darker and deeper than she ever imagined and soon, she finds herself saving his life to prevent his untimely demise.

But the longer she sticks around the Shadow King, the more she begins to fall and the thought of murder is pushed further into the back of her mind.

This book is absolutely perfect for any fantasy/romance fans!

Have you already read this novel? Check out our list of books like The Shadows Between Us!

If you are looking for the perfect replacement novel similar to These Violent Delights, then why not look at the author’s own other works?

New to 2022, Foul Lady Fortune is Chloe Gong’s latest novel is bound to be your next best read! Also set in Shanghai, we begin in 1931 where we meet Rosalind Lang. After being brought back from the brink of death four years ago, Rosalind is now unable to sleep or age.

She is essentially immortal. To make up for past mistakes, she becomes an assassin for her country whilst the Japanese Imperial Army invades. Posing as a Nationalist spy’s wife, Orion, she must discover the truth behind a series of murders.

Soon, they realize the conspiracy is much darker and more unbelievable than they ever could have imagined.

All sixteen-year-old Bree Matthews wants to do after her mother dies in an unexpected accident is run away from everything.

So, a residential program for high schoolers is a perfect way to escape from her old life but on her very first night she witnesses a magical attack – a flying demon is feeding off humans.

Bree finds out there is a secret society of students who hunt these demons down calling themselves Legendborn. A boy calling himself a ‘Merlin’ tries and fails to wipe Bree’s memory of the attack and in doing so, unlocks a memory surrounding her mother’s death.

With a magic of her own, she infiltrates the Legendborn to find out the truth behind her mother’s death, no matter the cost.

Books similar to These Violent Delights thrill and surprise readers much like Legendborn which is full of action, magic and twists!

In Realm Breaker, we meet Corayne an-Amarat who is the daughter of a pirate, that is until she is visited in her small seaside town and told she is the last of ancient bloodline.

The plot thickens when she is told this bloodline is the only one that can save the universe from impending doom and destruction.

Even from her tiny town, she could sense the growing darkness creeping its way across the continent: a man with a stolen sword who is willing to burn everything to the ground to get what he wants.

Along the way, Corayne picks up misfits and friends to join her on the quest, building friendships, romances and even enemies. A fantastic novel with incredible characters and worldbuilding, this is the perfect ‘save the world’ story for readers!

Disguising herself as a man, Zafira is the hunter who bravely ventures into the forest of the Arz in order to keep her people fed and alive. But her achievements as the hunter would be for nothing if her idenity as a woman is revealed.

Nasir is the sultan’s son who assassinates those who defy his father’s rule but if he were to show any compassion, his father would punish him in the most unimaginable way.

The pair have more in common than they think and when the Arz threatens to consume the land in shadow and darkness, they meet and must come together to fight an ancient evil.

This wonderful fantasy, We Hunt the Flame, is full of action and violence with an unexpected romance of rivals is perfect for those looking for something similar to These Violent Delights.

Book of Night, by Holly Black

These Violent Delights merge our own world with that of fantasy, much like Holly Black does in Book of Night.

In the world Charlie Hall inhabits, shadows can be altered for all types of purposes but doing so, comes at a cost.

And it also has a life of its own. Charlie herself is a con artist, nothing special, but she works as a bartender while taking on odd jobs in order to steer clear of the shadow underground market.

However, when a figure from her past turns up, she is thrown into chaos where everyone around her is desperate to control the magic of the shadows. Pick this one up for a fabulous read!

Serpent and Dove, by Shelby Mahurin

In Serpent and Dove, Louise le Blanc ran away from her coven to the city of Cesarine where magic is feared and witches are burned. But living in constant fear, and forsaking magic is better than returning home where her certain death is waiting for her.

Reid Diggory is a chasseur since he was a young boy, sworn to the church and to kill all witches. When the pair are forced to join in marriage, Lou has to stop her growing feelings whilst preventing a fate that will destroy the world.

An immersive and beautifully haunting novel of love and hate, magic and fear, this book will have you turning the pages eagerly!

In Dance of Thieves, the Ballenger empire is feared by their own citizens and the neighbouring kingdoms. So, when the patriarch dies leaving Jose, his son, in his place to rule, the instability allows a young queen to begin a new era, making her an enemy of the empire.

Kazi is a reformed street thief who is sent by the new queen to infiltrate the Ballenger empire and investigate their inner workings. But when she arrives, Jose is not the stoic and brutal man she expected to meet.

With feelings between one another beginning to grow, the pair are keeping secrets of their own.

This enemies-to-lovers fantasy story is the perfect book similar to These Violent Delights with the two main characters and love interests fighting feelings amongst a setting that won’t allow them to be together.

The Thief, by Megan Whalen Turner

The King’s scholar is insistent that he knows where a hidden and ancient treasure is hidden but to retrieve it, he must pick someone who can steal such a precious item.

He chooses Gem from the King’s prison. Gem’s intentions are unknown to all, including the magus himself.

So, when the pair undertake a tumultuous adventure together to steal the treasure, it is full of darkness and danger. Their adventure is only lightened by their storytelling – tales of the old gods and goddesses that once walked the earth and the heavens above.

The Thief is a wonderful adventure full of wit and style, perfect for lovers of These Violent Delights.

Into the Crooked Place, by Alexandra Christo

In this novel, we meet four crooks who navigate the streets of Creije, utilizing the magic around them.

After Tavia accidentally hands a vial of dark magic over to the wrong hands, in particular, a loved one, conflict and danger is sparked across the entire world.

Unsure if the four can even trust one another in such tumultuous times, they must band together to fight the growing darkness and stop the dark magic from spreading to every corner of the glove.

Into the Crooked Place is a found family novel which is a great read for fans of These Violent Delights.

Books like These Violent Delights show how love can bloom in the most unexpected places, especially where it is not allowed. I hope you found your next read in the list I have compiled for you above!

Are you looking for something to read after These Violent Delights? Have any recommendations that didn’t make the list? Let us know in the comments! 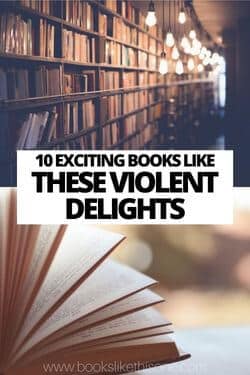