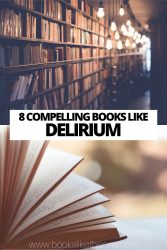 Dystopian romance has become a sub-genre all of its own, spawning hundreds of copy-cat stories of doomed romances set against a bleak-revolutionary backdrop. Delirium delights in torturing the reader and books like Delirium revel in trying to see how far they can go before a reader cries out “Enough!” and snaps the book shut.

There is a fine balance to maintain. Fortunately, there are plenty of books similar to Delirium to enjoy if you are slightly taken with the idea of people still falling in love at the end of the world.

Books like Delirium love to throw the reader into a maze of twists and turns where you’re never entirely sure on which route to take. We Were Liars exploits the ‘unreliable narrator’ voice very well.

You know from the moment you read the opening page that something is not quite right here.

The ‘Liars’ are a group of close-knit cousins and friends who we meet through the eyes of Cadence. Cadence is gradually revealing their story to us, drawing on her own fractured memory caused by an accident that Cadence can’t fully remember.

As you move through the story, the truth is gradually revealed and you can’t help but feel an odd mix of sadness and hope by the end.

The Adoration of Jenna Fox, by Mary Pearson

Another similar title to Delirium is The Adoration of Jenna Fox. Who is Jenna Fox? Not even Jenna Fox knows. 17 years old and just awakened from a coma, Jenna is told her name and that she was involved in a terrible accident a year ago. But is that all there is to it?

Waking up into a world where much has changed and her own memories are muddled, leads Jenna on a quest to recover her memory and discover what really happened to her.

The characters of Lily and Ethan provide a sparkle of teen romance amidst Jenna’s search, but the thrust of the narrative lies in Jenna’s gradual discovery of who she is and why she lost her memories. Well worth a read if you enjoyed Delirium.

All the Birds in the Sky, by Charlie Jane Anders

A witch and a mad scientist part ways under mysterious circumstances whilst at school. That hook alone, got me reading on. There are many books like Delirium that thrive on mystery as well as romance and magic, and All the Birds in the Sky doubles down on all. Patricia and Laurence are our witch and scientist in this tale.

We meet them first as teenagers in school and again as adults as something strives to bring them back together to either save the world or destroy it. This book’s genre is hard to classify as it borrows elements from fantasy, science fiction and even magical realism.

What is great about it, is the questions it makes you ask about the world and of yourself. Are we doomed? Will nature kill us before we kill it? Is there any way to meet nature in the middle? Read this book and see if you can answer these questions yourself.

If you are a sucker for the romance in books like Delirium, you will love Everything, Everything.

Madeline is a teenager whose condition has kept her housebound her entire life. Madeline is basically allergic to pretty much everything in the world. Her whole world is a bubble she has never been able to burst. But then Olly moves in next door, and Madeline finds herself longing for things she never knew she was missing.

Cheesy romance aside, Everything, Everything is well written and you will find yourself enjoying the story, even if you can guess what’s going to happen before it happens. There is some controversy over the twist in the story, but it’s best to read and decide for yourself rather than be led by eye-rolling reviews on Goodreads.

I first knew of Dan Wells as one of the cheerfully acerbic co-hosts of Writing Excuses (an essential podcast-listen for any writer). His books are filled with the wit and dry humour he frequently displays in his discussions. Partials is no different.

Books like Delirium are filled with doom and apocalyptic strife, but the world of Partials really feels like this type of disaster could happen. Bio-engineered beings identical to humans have virtually wiped us all out following a war. The survivors are gathered on Long Island and living in dread.

Enter Kira, a sixteen-year-old determined to find a solution. And her solution involves studying the bio-engineered beings; the ‘partials’.

I picked up this book on a friend’s recommendation. We are both huge fans of the noughties version of Battlestar Galactica and he thought I would enjoy this. He was right. I think you might enjoy it too.

Another day, another tale about a society split into upper and lower class. Birthmarked might lean heavily on an overused trope, but that doesn’t mean it is a bad story. In fact, it is important to read stories like Birthmarked to ensure societies like this never come to fruition.

Drawing on inspirations from The Handmaid’s Tale and 1984, Gaia is a sixteen-year-old who lives only to serve the privileged by delivering babies and handing over a quota to the Enclave. This is her duty and she takes it seriously. Until her mother and father are arrested by the people they all serve without question.

Yes, this might be not the most original story, but Birthmarked does enough to draw you in and remind you that we are all often only one step away from descending into a life of cruelty.

The granddaddy of dystopian tales (along with a few others). Books like Delirium walk a fine line between giving the reader just enough reason to hope, and beating them down with a harsh reality.

In 1984 there is romance and a determination to fight against an unjust society. Unlike the Delirium trilogy, 1984 does not deliver a hopeful ending. Winston and Julia do not get the battered-but-happy-in-the-end promised by many dystopian romance novels.

Instead, 1984 takes the reader on a traumatic journey through the totalitarian world ruled by Big Brother, who has built a cult around his personality. Everything you do is watched and recorded by the various ministries. Everything you say is listened to. Everywhere you go, you are under the ‘benevolent’ gaze of Big Brother.

So many books have tried to replicate 1984‘s bleak unhappy world. Only a few have managed to capture the banality of evil quite as well as Orwell did.

If 1984 has beaten you down, then Vox might give you reason to hope again.

Books like Delirium work hard to get a reader engaged enough to hate the villains and get behind the heroes. In Vox this is well played as Dr Jean McClellan is quite literally denied the right to speak.

In a not-so-unbelievable future, women in the former USA are only allowed to speak 100 words a day. This is controlled through electronic counters they are forced to wear on their wrists. The trauma and terror this causes is communicated viscerally by Dalcher.

Vox holds a mirror up to our own world, where even today women are treated like second class citizens. If you think men and women are equal, take a look at the gender pay gaps that still exist. Look at the number of women who constantly look over their shoulder for fear of being attacked and sexually assaulted by a man.

Vox shows just how sinister and morally repugnant sexism and the subjugation of another human being is. The story is taut and thrilling. The characters are relatable even when they are unlikeable. And unlike 1984, Vox offers a measure of hope that we can do better.

Books like Delirium offer us a skewed window into a number of bleak futures that we might find ourselves stumbling into. Whilst they may cloak a message in romance and adventure, books remind us that they remain one of the best tools we have to talk openly with each other without shouting.

This is why reading and telling stories is so important. They offer us all a way to communicate and warn about dangers old and new.

Are you looking for more books similar to Delirium? Have any recommendations that didn’t make the list? Let us know in the comments! 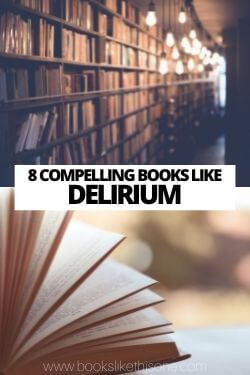