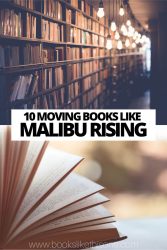 Call the firefighters because books like Malibu Rising will most likely end up with a fire or some kind of explosion.

In Malibu Rising, we get to experience all the hardship and success the Riva siblings go through, along with the absence of their famous singer father, Mick Riva.

The book takes us to the start of Mick and June’s fairytale love story, to when it all went bad, how their kids get through disaster together and everything in between that leads them to the fire.

In Forever, Interrupted, Elsie found love when she least expected it while getting pizza on a rainy day. Little does she know that her life will never be the same after that day.

When she meets Ben, they both feel an instant connection. After exchanging phone numbers, the relationship just skips the average timeline. They move in together after a couple of months and get married after six months instead of waiting a few years like most people.

But like the supernova Ben once mentioned, their love story did shine bright for the time they were together and unfortunately fades when Ben unexpectedly dies on a cereal run to the store.

Now Elsie has to figure out how to move on as a young widow after only having been married for nine days.

While meeting her mother-in-law for the first time in front of Ben’s cold body may not be an appropriate place to meet your in-laws, their relationship can be what they both need in their journey of healing.

The Queen of Hearts, by Kimmery Martin

The Queen of Hearts centres around a long-term friendship that started before college between Zadie and Emma. The two are different, but they balance each other out and they share their love for the medical world.

The book goes back and forth between the girls’ time in medical school, when they were just figuring themselves out, and the present, as they navigate as doctors and family women.

Similar to books like Malibu Rising, this book deals with loss in the medical field setting but also in the personal lives of the main characters. We get to see how the ladies handle it and how they try to overcome the pain.

We learn that during their time in medical school, with barely any time to sleep, Zadie and Emma still found a few moments for romance, but Zadie will soon learn that her best friend isn’t the person she thought she was.

Imagine a world so obsessed with fame, social media, and everything else involving electronics that when it all falls apart, people are left helpless.

In Followers, we follow Orla, Floss and Marlow and how they find their way to each other decades after the “Spill” that leaves them feeling worlds apart.

With a look into the past, we see how Orla and Floss figure out how to become famous in an unconventional way to reach their dreams.

Orla and Nina from Malibu Rising are alike because they don’t care much about the fame and followers, while Floss will shamelessly hurt people to be famous.

As the book exposes the characters’ secrets and slowly takes us to 2051 America, you will be left wondering whether it’s time to put your devices away and live in the moment instead.

The Reunion, by Meghan Quinn

As the Chance siblings Ford, Cooper and Palmer are once again in their hometown to throw their parents a 50th wedding anniversary party, The Reunion between the siblings might not be as sweet as the cake they keep fighting about.

While their parents tried to model a relationship filled with love, the siblings have not had the best of luck in their personal love lives.

Even as adults, Ford and Cooper still struggle with wanting to prove to their parents that adopting them was the right choice and Palmer wants to be taken seriously instead of being seen just as the baby of the family.

The aspect of being there for family and the sibling dynamic is similar to the Riva siblings in Mailbu Rising. No matter what issues they come across, they can always work them out to support one another.

One Italian Summer, by Rebecca Serle

After hearing her mother recount stories about her summer in Italy over the years, Katy and her mother finally plan their trip. Sadly, her mother dies before being able to go on the trip.

Katy thought of her mother as her best friend and soulmate, her death left her heartbroken and she decides to go to Italy on her own in hopes of feeling closer to her mom.

When she steps foot onto Positano, she feels less depressed and can feel her mother’s spirit. But something unbelievable happens to Katy as she walks the same streets as her mother once did. Katy befriends her own mother, who is about the same age as Katy at the time.

As Katy tries to hold on to and cherish every second she is given with her mom, she gets to know a different version of the mother she grew up knowing.

With all its magical moments, One Italian Summer can be just what Katy needs to rediscover herself and learn about her mother’s past.

The Paris Apartment, by Lucy Foley

In the hopes of a fresh start, Jess leaves her life in England to stay with her brother in The Paris Apartment.

When she arrives and her brother Ben is nowhere to be found, she knows something bad happened to him. Ben is not the kind of person to say he’ll be somewhere and then disappear without letting others know.

Similar to books like Malibu Rising, even when family relationships are complicated, siblings in these books tend to stick together and help one another out when needed, especially during tough moments.

As Jess begins her investigation by asking Ben’s neighbours questions, she quickly realises they’re all hiding something. Now it’s up to Jess to find out what happened to her brother and who had something to do with it.

Looking to create a stable home for her daughter Pearl, Mia finally decides to move permanently to Shaker Heights, which seems like the perfect cookie-cutter town to retire their lives as nomads.

Mia quickly learns that the people in town only play the nice neighbour act, like Elena who is the owner of their rental house. But sooner or later their real selves will show.

Aside from the buildup to houses burning down, Little Fires Everywhere and books similar to Malibu Rising show the complicated relationships in family and romantic partners.

While Mia works hard to hide her secrets to protect her daughter, she will also learn that she’s not alone with her secrets and other people may be trying to hide much worse.

After her widowed mother marries a rich Hollywood producer, Piper and her sister have everything they want at their fingertips without having to work for it.

That is until her longest relationship of three weeks ends and to mend her broken heart Piper throws the biggest, wildest pool party of the year at a fancy hotel she breaks into.

When she gets arrested, her stepfather and mother decide to send her to her father’s hometown without much money so she can figure out what to do with her life instead of just spending money and partying.

Her sister accompanies her and after a few days of moping around, the two decide to fix up their father’s bar to prove they are more than just pretty faces. Piper will also meet a grumpy fisherman captain that can teach her a thing or two.

Piper learns that there’s more to life than being famous and rich, just like the lesson learned by characters in books like Malibu Rising. But will a summer be enough to make Piper choose love over fame in It Happened One Summer?

It’s been 11 years since one of the worst days of her life and Macy is slowly moving forward. She’s engaged to an older man who has a daughter and she is working as a pediatric resident.

Then she runs into Elliot, the love of her life — who she hasn’t spoken to in those 11 years. Her feelings for him are stronger than ever, but she still can’t forget the event that broke them apart.

Similar to books like Malibu Rising, Macy and her father have to find a way to continue after her mother’s death when Macy was only 10 years old.

Thanks to her mother leaving a guide of advice for her father on how to help Macy through different situations, Macy feels like her mother is still playing a role in how she’s being raised.

As we go back to the past and then to the present, we see how their relationship develops and when it all fell apart. But can they let the truth out about that bad day and still want to be together in Love and Other Words?

With their endless wedding and bridal shower invitations, Isabella, Mary and Lauren need their recovery brunches to catch up on their own lives.

The three ladies share their struggles with their careers, relationships, family and heartbreak as they see almost everyone around them getting married and having babies, but they feel stuck.

Similar to Nina from Malibu Rising, Isabella is not happy at her job but doesn’t know what move she needs to make to get out of the situation and find something better.

When Mary finally finds a wonderful guy, she realises he loves his mom more than he’ll ever love her. Lauren thinks she can avoid falling for the bartender at the bar she works at, but signs may be pointing to her failing.

As the three continue searching for love and fulfilling careers, Girls in White Dresses shows how things don’t always go as planned and there’s no problem with enjoying the journey.

Books similar to Malibu Rising often have some representation of family and involve some kinds of fire – whether figuratively or literally. While the characters might have to deal with pain, they figure out how to light up the fire inside them.

Are you searching for books like Malibu Rising? Have any recommendations that didn’t make the list? Let us know in the comments! 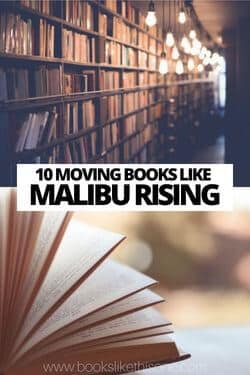