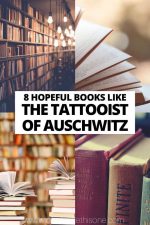 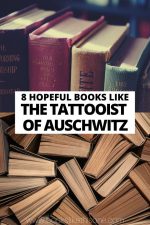 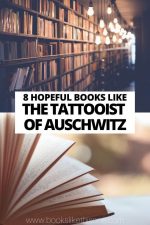 In times of uncertainty, we latch onto anything which gives us a sense of hope that things will get better, this is why books like The Tattooist of Auschwitz and the others listed below are so popular. They depict stories of struggle, adversity and people coming out the other side of some very trying times which in turn gives the rest of us the inspiration and motivation we need to survive the dark times of our own.

In the case of Lale Sokolov in Heather Morris’ The Tattooist of Auschwitz, it is love for another prisoner that sees him through the years he spent captive in Auschwitz. Lale’s job in the camp was to tattoo numbers onto prisoners in doing so he soon meets Gita a terrified young girl.

As he tattoos her number he not only pledges to protect her but also marry her if they survive the camp. Lale’s story though harrowing in places is also extremely hopeful and a poignant example of human endurance during a period of total desperation when it would be only too easy to just give up.

There is nothing more hopeful than the dreams and aspirations that every parent has for their children and Amy Tan’s 1989 novel The Joy Luck Club is a moving example of this. The novel tells the multi-generational stories of four Chinese immigrant mothers and their four American born daughters.

The mothers set up the aptly named Joy Luck Club in 1949 where they would all meet and regularly play mahjong. While playing, they retell stories of the lives they left behind in China and look forward to a more hopeful future in America for them and their families. In structure the novel cleverly emulates a game of mahjong it is divided into four sections one per mother, each section has four chapters which focuses on the mother’s story and her daughter’s.

Tan explores and dissects the complex relationships between mother and daughter, the infallible bond that remains intact despite differences of opinion, life choices and experience. Dreams, plans and above all hope are recurrent themes in the novel and what makes The Joy Luck Club a great read for anyone looking for books similar to The Tattooist of Auschwitz.

Books like The Tattooist of Auschwitz are able to provide insight into the human condition during particularly distressing experiences, in the case of John Boyne’s The Boy in the Striped Pyjamas we see this through the innocent eyes of children.

9-year-old Bruno is growing up during World War II, when his father gets promoted by Hitler himself Bruno and the rest of his family are moved to Auschwitz or ‘Out-With’ as Bruno calls it. Here he forms a surprising friendship with a Jewish boy, Shmuel who lives on the other side of the fence and wears a prison uniform, what Bruno calls striped pyjamas.

Though Bruno is still relatively unaware about what happens on Shmuel’s side of the fence he visits him daily sneaking him food and exchanging stories. Bruno learns that Shmuel is separated from his family so they hatch a plan to try and reunite them, a plan which ends in unexpected tragedy.

The Boy in the Striped Pyjamas highlights how unnecessary hate and division is and how through the eyes of children the entire world is hopeful which is something we should all try and hold on to.

Women Talking opens with an author’s note explaining the novel’s basis. It is a fictional reaction to a horrific real-life event surrounding a group of men from a Mennonite colony who repeatedly drugged and raped many of the girls and women in their community for a duration of 4 years.

The novel opens after the rapes have been discovered and centres around a group of eight Mennonite women whom the atrocity affected. It is written in the form of minutes from their secret meeting where they discussed what they should do; forgive their attackers and remain in the colony with them which is the only life they have known or leave and embrace the uncertainty of the big wide world outside of their community.

Women Talking is author Miriam Toews’ eighth novel, she expertly portrays a battle between religion and gender and gives these silenced women a voice as they discuss wrong from right, dissecting the philosophical and religious implications of their decisions. For anyone looking for more compelling novels like The Tattooist of Auschwitz will certainly find it in Women Talking.

Salt to the Sea, by Ruta Sepetys

Ruta Sepetys is becoming renowned for writing stories about the lesser-known tragedies which occurred as a result of war and the people affected by them. For her second novel, Salt to the Sea, Sepetys was inspired by one of the greatest maritime disasters in history; the sinking of the Wilhelm Gustloff a ship carrying thousands of refugees to freedom after the Second World War came to a close.

Told in alternating points of view Salt to the Sea follows four strangers whose lives converge en route to this ship and how they become a mere drop in the ocean amongst thousands of other people trying to survive.

A tragic story that above all demonstrates the strength of love and how it can prevail even in the most unfortunate circumstances is why Salt to the Sea is a fitting read for anyone looking for books like The Tattooist of Auschwitz.

The Hate U Give, by Angie Thomas

Angie Thomas’s debut novel The Hate U Give was met with critical acclaim upon publication in 2017 for its raw depiction of race relations and the harsh realities of urban life. The novel’s protagonist advocates against injustice and it is this which makes The Hate U Give such a compelling read for those looking for books similar to The Tattooist of Auschwitz.

Starr Carter is a 16-year-old black student at an elite private school who is growing up in a poor neighbourhood, the complete opposite to the lives of the other students at her predominantly white school. Torn between two worlds, life for Starr becomes harder when she is the sole witness to a fatal shooting involving her childhood friend Khalil and a white police officer.

Khalil’s death becomes a national headline; he is branded a drug dealer and thug leaving Starr little choice but to stand up for the truth and for what is right.

Incredibly timely subject matter The Hate U Give aims to broaden the understanding of the Black Lives Matter movement and highlights the difficulties faced daily by black Americans and how things can and need to change.

Have you already read this novel? Check out our list of books like The Hate U Give!

It is estimated that around three million people died in the Soviet forced labour camps of Kolyma in Siberia and Varlam Shalamov endured 17 gruelling years of appalling treatment as captive.

In the stories in Kolyma Tales, he provides a candid snapshot of the lives of some of the ordinary people caught up in the harrowing conditions and the devastating effects it has on them. The Kolyma Tales encompasses two areas; personal experience and accounts of stories that were overheard blending them both with fact and fiction.

Brutally honest and though shocking at times, these stories not only reflect the biography of a rare survivor of the camp but also act as a historical record of the atrocities which occurred.

Shalamov’s stories are considered a masterpiece of 20th-century literature which is why anyone looking for more enduring novels like The Tattooist of Auschwitz will certainly find it in Shalamov’s Kolyma Tales.

If you like The Tattooist of Auschwitz for Lale’s strength of character and drive to survive then I am sure you will also be bewitched by Kya the protagonist in Delia Owen’s New York Times best-selling novel, Where the Crawdads Sing.

Deserted by everyone she has ever loved and outcast from the inhabitants of the quiet town of Barkley Cove, Kya or ‘the marsh girl’ as she is referred to by many, had to learn about life from the animals and nature inhabiting the surrounding marshlands where she grew up.

The narrative unfolds across two timelines which eventually cross with Kya at the heart of a mysterious death just waiting to be resolved. Where the Crawdads Sing is a breathtaking story of survival, hope, love and the effects of loss. Owens leads the reader on a gripping journey through the wilds of the North Carolina marshlands to uncover the rather unexpected truth.

If you liked Heather Morris’s reimagining of Lale Sokolov’s tale in The Tattooist of Auschwitz then I am sure you will also enjoy reading about Cilka Klein, another Auschwitz survivor in Morris’s follow-up Cilka’s Journey.

Cilka was just a child when she was imprisoned in Auschwitz and only eighteen when she is eventually liberated. Her freedom is brief as she is among many other women accused of Nazi collaboration and is moved on to one of the labour camps in Siberia as punishment.

Fortunately, Cilka makes an impression on a female Doctor and is enlisted to help her tend to the ill in the camp amidst yet more heart-rending and brutal conditions. Cilka has to draw upon endless resources within herself to carry on confronting death each day but when she nurses a man called Ivan love soon becomes the only resource she needs to survive.

Morris has a unique ability to write about particularly harrowing circumstances in a sensitive and humane way which is why Cilka’s Journey naturally makes a great next read for anyone looking for books like The Tattooist of Auschwitz.

The novels that feature on this list of books like The Tattooist of Auschwitz at times aren’t easy to read, they are stories of some of the most troubling events in history and in the world as we know it.

Though highlighting some of the atrocities of human nature they also demonstrate the strength and power of hope, love, truth and survival which, in turn, gives us promise of our own to keep going.

Are you looking for more books like The Tattooist of Auschwitz? Have any recommendations that didn’t make the list? Let us know in the comments. 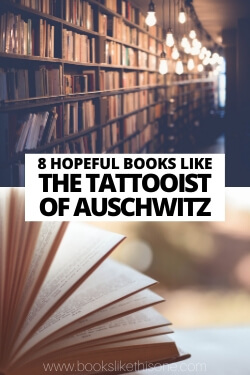