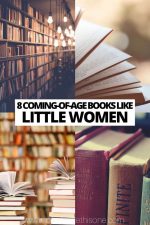 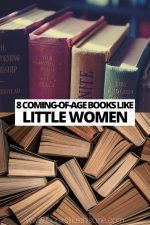 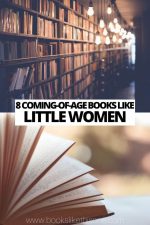 With the new film just out of the cinemas, now is the perfect time to give this heart-warming classic, and books like Little Women, a read.

The March sisters could not be more different; Jo is the boyish writer, Meg loves fashion with desires to marry well, Beth is musical and Amy is artistic. The girls squabble like all siblings do, but the novel Little Women is a coming-of-age narrative for all four girls, depicting the paths women could take in those days in their journey to adulthood.

The following novels are all coming-of-age stories, some in the same era as Little Women, while others stretch into the 20th Century. The girls in these novels all face different trials, but each goes from girl to woman in one way or another, just like in Little Women.

Jane Austen novels make great films – Emma is another that has only recently hit cinemas, and tells the enchanting and whimsical tale of Emma, a young lady who rather enjoys inserting herself into other people’s business, whether they wish for her to do so or not.

The novel delves into issues such as marriage, sex, love and social status – all such messy affairs which Austen portrays with wit and comedy. When Emma befriends the ditsy Harriet, a girl whose parentage is unknown to her, and therefore whose class status remains a mystery, she takes it upon herself to consolidate a marital match for her, despite the fact that Harriet has already fallen for a lowly farmer.

What ensues are a series of misunderstandings and miscommunications, which baffles both the reader as well as Emma, as she unwittingly finds herself on her own path to marriage.

As in books like Little Women, marriage plays a huge role in turning a girl into a woman, yet Emma, like Jo, resists the idea of it, hell-bent on becoming a woman in any other way possible. A natural follow-up read to Little Women, anyone who enjoyed Louisa May Alcott’s novel will love Emma.

Written about 20 years before Little Women, Charlotte Bronte’s Jane Eyre tells the tale of eponymous protagonist, a young woman who must make her way in the world despite having no title or money. Jane escapes a violent household to become a teacher at Thornfield Hall, where she does lessons with a child called Adele.

In this house, she meets the intangible Mr Rochester; at first, the pair argue, but as time goes on, they begin to grow feelings for one another, leading to Mr Rochester asking Jane to marry him. But Mr Rochester has a secret he has been keeping from Jane, that threatens their marriage and future happiness.

Jane is much like Jo – she is independent and feisty, unafraid to stand up for herself despite coming from a poor background. Like in Little Women, when things don’t go her way, Jane must continue to develop into adulthood, despite the forces that work against her, in order for her to have a happy ending.

One of the most widely read novels about race, To Kill a Mockingbird investigates the race relations in Alabama in the 1930s. The novel follows Scout and her brother Jem, as they grow up with their lawyer father Atticus.

Much of the novel shows Scout and Jem playing as children do until Atticus becomes wrapped up in a rape case between a white woman, Mayella Ewell, and a black man called Tom Robinson. The complexities of the case and race relations are depicted in the novel through the eyes of Scout, all while she is growing into a young woman, and learning her place in the world.

Atticus serves as a moral compass to herself and Jem, always trying to teach them the right way in life, even when these choices are difficult. As in coming-of-age books like Little Women, Scout faces a series of trials, more so than the average child, and her character is constructed through these experiences, proving that what happens to us as children can shape who we are as adults.

Have you already read this book? Check out our list of more books like To Kill a Mockingbird!

Their Eyes Were Watching God, by Zora Neale Hurston

Zora Neale Hurston wrote Their Eyes Were Watching God during what is known as the Harlem Renaissance in the 1920s. It follows Janie Crawford, a black teenager who must work to control her own destiny.

Janie is married off at a young age to an older man called Logan, but she desperately wishes to feel real love and finds herself trapped in a marriage of efficiency rather than affection. Finding her power, Janie runs away from her unhappy relationship to become the wife of another man but soon learns that although she has passion, she lacks respect from her new husband, and the grass isn’t always greener on the other side.

Janie faces difficulties in her growth from adolescent to adult, and just as in books like Little Women, she eventually comes to surpass her hardships even when it means to sacrifice. An older Janie tells the tale, informing the reader of all the lessons she’s learned, and all the people she has lost too.

Perhaps Austen’s most famous novel, Pride and Prejudice is a story about exactly that. The protagonist, Elizabeth Bennett must learn to separate her personal feelings and admit that first impressions are not always correct. The story is largely about the constitution of marriage, and the importance of such a ritual in this era, as in other novels like Little Women.

At a dance, Elizabeth comes to make the acquaintance of a Mr Darcy, who she instantly takes a disliking to, despite the fact that she barely knows him. Sound familiar? Such a concept makes an appearance in nearly every novel on this list, and as in all of them, the protagonists must eventually overcome their first impressions.

The novel where arguably the most famous line is written, “It is a truth universally acknowledged, that a single man in possession of a good fortune, must be in want of a wife,” Pride and Prejudice is a classic that deserves to be analysed and read by anyone who has a serious love of literature – the story will stay with you and serve as a pillar for which all other work of its kind must be judged.

Have you already read this book? Check out our list of more books like Pride and Prejudice!

Bread Givers is set in 1920s New York and follows Sara, a young Jewish woman who is sick of her life in poverty, and constantly works to consolidate power and love in a world where this is lacking. Sara’s father refuses to work, dedicating all his time to his faith, leaving Sara, her mother and her three sisters to pull in as much money as they can.

Sara’s father acts as a metaphor for the patriarchy during this time – each of his daughters are proposed to by men that they love and yet he refuses to grant his blessing for their marriages, which eventually forces Sara out of the family home, and out in the world, for the first time, alone.

The reader follows Sara as she tries to create a life for herself, in the most dire of circumstances, without the help of anyone, and that is why it is a classic coming-of-age novel – it is much like Little Women in the sense that Sara has a lot in common with Jo, eventually pursuing teaching as a way of gaining independence.

The most recently written novel in this list of books like Little Women, Toibin’s Brooklyn was published in 2009, although it is set post-war in the 1950s.

It follows the growth of Eilis Lacey, a young lady whose life has come to a stop in Ireland, as she finds it difficult to find work anywhere. This leads her to pursue immigrating to America, more specifically Brooklyn, where a priest has helped her find accommodation and a job.

Initially, Eilis is severely homesick, missing her old life, but as the months go by, she settles into her new life, finding friends, qualifying in a college course, as well as finding a boyfriend called Tony, who soon begins to imagine a life for the pair of them.

But when a personal tragedy affects Eilis, which forces her to return to Ireland, she must negotiate how she feels about both her homes, the one she left behind and the one she’s found in Brooklyn. Like in Little Women, as the sisters must learn to leave the nest and live their lives, Eilis must as well, making this the perfect coming-of-age story.

Mansfield Park is a witty comedy and the third Austen novel on this list of books like Little Women – her novels really speak to the woman who is coming into her own and finding herself in the world, and they compliment Alcott’s novel perfectly.

Fanny Price leaves her poor family to live with her Aunt and Uncle at Mansfield Park, where she soon begins to learn how the other half live. The novel is, like Emma, and Little Women, a series of misunderstandings, that delight the reader with their comedic consequences, as Fanny learns the ins and outs of living in such a house, and how romantic relationships between men and women work.

In fact, in this novel, which is perhaps lesser known than some of Austen’s other novels, such as Pride and Prejudice and Sense and Sensibility, nearly every romantic interaction under the sun is explored in Mansfield Park, not unlike other novels like Little Women that focuses on multiple characters and their love lives.

Little Women was written over 150 years ago, but its themes, particularly when it comes to the coming of age story in each of the four March sisters, is timeless and can be understood and related to in any era.

The novels above are classics, or more traditional stories from simpler times arguably, but they still depict the intricacies with relationships, marriage, sex and friendship, and for that reason, each one is worth a read.

Are you looking for more books like Little Women? Have any recommendations that didn’t make the list? Let us know in the comments! 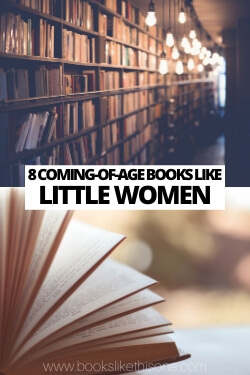