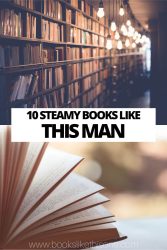 Books like This Man will not only leave you blushing but will make you hope the characters can save themselves and still end up together in as healthy of a relationship as they can.

In this book, when Ava and Jesse meet, there’s a strong attraction. Although Ava wants to keep things professional since she’ll be his interior designer, his obsession with her is intoxicating and feels a bit menacing.

The deeper Ava goes into his world, the harder it will be to run away and to save herself from his darkness.

Beneath This Man, by Jodi Ellen Malpas

As the second book in the This Man trilogy, Beneath This Man continues where the first book ended with Ava picking up the pieces after leaving Jesse.

But she couldn’t escape him for long. When Jesse wants something or someone, he will do anything to get it.

Even when getting close to him again can be dangerous for Ava, she can’t help but want to know more about Jesse and the reasons he is the way he is. Ava is willing to risk her freedom and safety to get to know the real Jesse.

When Anastasia agreed to interview Christian Grey as a favour to her friend, she couldn’t have imagined how much her life would change after meeting him in Fifty Shades of Grey.

Ana is quiet, smart and independent, but she thinks of herself as plain and wouldn’t describe herself as pretty. So it’s a surprise to her when Christian takes an interest in her, especially when she’s sexually inexperienced.

While Ana was hoping for romance, she will soon find out that Christian has other plans and no matter how hard she tries to fight it, she can’t help but agree with his request. This is also similar in Ava and Jesse’s relationship in This Man.

As Ana gets thrown into Cristian’s world, will he be able to compromise and open up to her so that she also gets what she needs from their arrangement or will he just let her walk away?

Degrees of Control, by Eve Dangerfield

After the end of her relationship which started off sweet and slowly turned toxic when her ex-boyfriend let his true colours show, Charlotte was left vulnerable but ready to explore her hidden kinks.

At one of her friend’s parties, which she finds out is a party to find her the perfect lover, she is introduced to her friend’s cousin and instantly knows he can make all her wildest dreams come true in the bedroom. And that he does.

Even with his years of experience with dominance and no-strings-attached, James feels a deeper connection to Charlie and they forget to set up boundaries outside of their arrangement. Soon the two are going on dates and getting to know each other on a level no one else has.

But with James holding back on sharing his past trauma, can Charlie really get to know all of him? Will his Degrees of Control end up pushing her away and end things before they get started?

When her brother’s best friend moves in next door to keep an eye on Ava and keep her safe, she never would have let herself imagine becoming friends with him.

Alex is cold, serious and appears to not have any human emotions like a tall, handsome robot. But somehow Ava is able to warm up his cold heart just a little bit.

As things start to heat up between the two, crossing the line in their already complicated relationship similar to other books like The Man, Ava will have to remind herself that Alex is not into serious relationships.

Although Ava can easily open up to Alex, he is less willing to let his secrets out. Will Alex continue with his plans for revenge even when he can possibly lose Ava and is their Twisted Love enough for Ava to stay?

Reflected in You, by Sylvia Day

As part of the Crossfire series, Reflected in You continues to follow Gideon and Eva’s dysfunctional love story.

Eva had a taste of life with Gideon in it and even when she tried to stay away from him, something would just bring them back together.

Similar to books like This Man, Eva knew there was darkness in Gideon but she also knew that she herself was broken. She just hoped they can glue the pieces back together for one another.

The two have the potential to hurt each other more than anyone else, but if they could get through the pain then they could also be the best thing for each other. But when do you know if it’s love or an extreme obsession?

Mia has always had a crush on one of her brother’s best friends, but she thought he was out of her league, until he wasn’t.

She hadn’t expected Gabe to also be attracted to her, especially since she was younger than him, but her youth was the main reason he stayed away from her. However, now that she was older with some experience, he was ready to share all his fantasies and desires with her.

Like in books similar to The Man, the male character is often older, dominant and is against relationships. Although when the right girl comes along, she can break through all his barriers.

As Gabe and Mia explore their desires, with their relationship slowly evolving, their love can start to give them hope. But they both have to decide if they’re ready for the commitment and ready to tell Mia’s brother about their secret relationship in Rush.

Dare to Resist, by Laura Kaye

Even with an important contract on the line, Kady can’t Dare to Resist her competition. And he isn’t just another guy in a suit, but her brother’s best friend who she’s had a crush on for years.

When bad weather leaves them stranded in the same motel, Colton and Lady have no choice but to give in to their desires. It turns out their fantasies line up and like in books similar to This Man, Kady is ready to be controlled.

Can they both rein in their feelings after this night and go back to staying away from each other, or is it time to think with their heart about a future together?

Being dumped by her wannabe comedian boyfriend in a new country comes with its benefits, maybe not right away but after her breakdown, Autumn can go after her wildest dreams and fantasies.

Autumn has dreamed of different roleplaying situations where she’s Captivated and kidnapped by a lover and who better for the role than her grumpy landlord?

With the two making their arrangements and requirements, they set out to have the best sexual experience of their lives. However, sometimes even the best laid-out rules can be broken, with “no strings” developing to feelings and potential heartbreak, similarly to other books like This Man.

Release Me, by J. Kenner

In hopes of running away from her past and trying to pursue her dream career, Nikki moves from Texas to Los Angeles to work in the art world.

Her first night out in the new city should’ve been her time to have some fun but instead, she has to attend a party at an art gallery to help her boss get the attention of a potential investor.

This wealthy man has no interest in her boss but he is interested in Nikki. He offers to pay her one million dollars to paint a nude painting of her and although she wants to, she can’t resist.

Similar to other characters from books like This Man, Nikki and Damien carry around their own darkness and scars.

As they spend more time together and with a clear connection between them, they might give in to the attraction. But if they want to make this relationship work, they have to trust each other with their stories in Release Me.

When she’s feeling at her lowest, as she’s trying to sell the wedding dress, the one she never got to use because of her cheating fiancé, at a secondhand vintage shop, Charlotte finds the sweetest note sewn into a beautiful dress and decides to exchange hers for this new one instead.

Although she won’t be needing the dress, the note brings her hope and she can dream about it being written to her. To take things one step further, she finds the writer of the note and goes on a search to meet him, just to cure her curiosity.

They say to never meet your heroes for a reason because when Charlotte meets Reed she can’t imagine him ever being sweet or loving someone.

After she gets hired by his grandmother to be an assistant at their family’s company, she does start to receive notes from Reed, but they are Hate Notes. And still, there are some sparks flying between them.

With both of them struggling with previous failed relationships, can they figure out how to move forward together?

We’ve learned from books similar to This Man that even the most experienced dominant partner can have their iced heart melted by the right person. This list is filled with steamy love stories that will leave you fully satisfied from start to finish. Enjoy!

Are you looking for more books like This Man? Have any recommendations that didn’t make the list? Let us know in the comments! 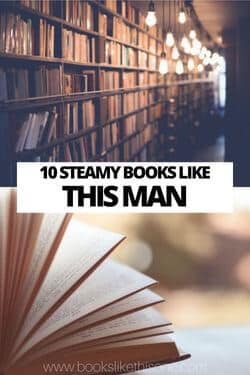