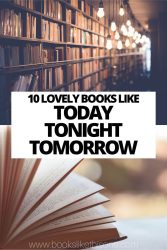 If you love stories involving enemies-to-lovers, then books like Today Tonight Tomorrow have just what you need.

While Rowan and Neil have been rivals since the first day of school, on their last day they finally realise how well they get along and how they work better as a team during the senior year scavenger hunt.

As the two help each other check things off their lists, they will also learn that maybe it wasn’t hate they were feeling but something more similar to love. Who knows, there could be a future here.

After The Night, by Sandra Marie

When sparks fly on the night of the office Halloween party, Cassidy hits it off with someone in a pirate costume. The only problem — he was wearing a mask and her contacts were blurry so she didn’t know who he was.

So now she’s on a mission to figure out who the masked pirate was and even though there are only a few men in the office, it’s a harder job than she anticipated. It also doesn’t help that she’s getting closer to her boss and she can’t deny the attraction.

Will Cassidy be able to end her search and explore a new romance or will she not rest until she finds the masked man in After the Night?

Better Than The Movies, by Lynn Painter

Growing up watching almost every romantic movie out there with her mother, Liz has lived her life trying to create and experience her own romantic comedy.

However, none of the guys at school has lived up to her fantasies, except for her longtime crush Michael, who moved away a few years ago. But thanks to fate or the romance Gods, he moves back for their senior year.

Now Liz has to plan out how to make him fall in love with her, but she will need the help of her rival and neighbour Wes.

Liz will soon find out that maybe what she’s always wanted was right in front of her and it could be Better Than The Movies.

Things We Never Got Over, by Lucy Score

Being the “good twin” hasn’t always been the easiest job for Naomi, especially when her sister Tina does everything she can to ruin things for her.

When Naomi becomes a runaway bride on the day of her wedding, she gets a call from Tina asking for help. Although it’s the first time in years Naomi has heard from her twin, she can’t stop herself from doing what she can to help.

However, Tina can’t be trusted and Naomi is quickly reminded of that when her car and money are stolen and she finds herself in charge of caring for her 11-year-old niece, who she didn’t know existed.

On top of everything else, Naomi starts to fall for a grumpy man who she can’t stand but slowly turns into her hero. Their enemies-to-lovers relationship is similar to many books like Today Tonight Tomorrow.

Now Naomi not only has a child and a long list of tasks she needs to complete to keep her, but also a complicated relationship with her neighbour and extra danger caused by Tina. As she becomes a part of the town and falls harder for Knox, will he be added to Naomi’s list of Things We Never Got Over?

Love in the Time of Serial Killers, by Alicia Thompson

If you’re obsessed with true crime, how can you trust others when they can all be hiding something? On top of that Phoebe is writing her PhD dissertation on the genre and has trust issues thanks to her parent’s failed marriage.

After her dad’s death, Phoebe decides to go back home for the summer to help her brother prepare their dad’s house for sale. On the night she arrives, she meets her neighbour and after a fight, she’s convinced he’s a serial killer. Phoebe immediately thinks the worst of Sam instead of giving him a chance first.

When she does some investigating, she soon finds out Sam is a teacher and is probably the nicest person she’s ever met, which is even more dangerous.

While she does her best not to fall for him, sometimes you can’t control your heart. But can Phoebe let down her guard and allow herself to be happily in Love in the Time of Serial Killers?

While most people see Nora as a shark, who takes what she wants unapologetically, she’s succeeded in her career with the main goal of being financially stable to help her sister and never have money be an issue.

As a literary agent, Nora is one of the best and always fights to get her clients the best deals. Her dream job would’ve been in editing but it doesn’t pay nearly as much.

When her sister forces her to take a long overdue trip with her, Nora is shocked to find herself at the destination of her favourite client’s best-selling book. But more shockingly than that is running into her rival and her client’s new editor in Sunshine Falls.

Nora and Charlie will have to work together on a new book, while slowly realising that they are more alike than they thought.

Soon the two will create their own love story, both on and off the new book pages. But will the Book Lovers be ready to set their egos aside to write their happy ending?

The moment Dani met Wyatt, and he ignored her, it was Love at First Spite.

Since starting her position as an interior designer at the same company where Wyatt is an architect, Dani’s life was turned upside down when she finds out her fiancé was cheating on her.

Dani can’t help but seek revenge for everything he did to her and what better way than to buy a “spite” house on the lot right next to the house she was supposed to live in with her ex.

Now the only complicated part is that she makes a deal with Wyatt so that he can be the architect of her Spite House project. Like in other books where the characters bump heads and mistrust each other, Dani wants to keep Wyatt at arm’s length but the more she gets to know him the more she likes him.

Although she progresses well with her revenge plan, soon Dani starts caring a little less about revenge and starts thinking about a future with the man who makes her heart skip a beat. Will Dani be able to give up on her plan to give love a second chance?

When Laurie’s almost two-decade-long relationship suddenly ends with the old “it’s not you, it’s me” speech, she is left confused beyond words. On top of that, she has no choice but to see him at the law firm they both work at.

As she slowly tries to rebuild herself and get used to the single life, Laurie wants to make her ex regret leaving her and make him beg her to take him back. So she decides to fake date the law firm’s player everyone dislikes.

Jamie comes up with the idea himself since he is trying to make partner soon and a respectable girlfriend like Laurie can help his case. As soon as word gets out about their “relationship” the whole firm is ready to either ship them or gossip.

While both Laurie and Jamie start to see the benefits of their deal, they also slowly dip into real relationship territory and we can all guess where that road leads.

But is Laurie ready to give up what she thought she wanted for the guy that might not be able to give her what she needs and deserves in If I Never Met You?

After returning home to help take care of her niece when her sister has a car accident, Emily has to confront the reasons why she wanted to escape the town so badly.

To spend more time with her niece, Emily agrees to volunteer for the town’s Renaissance Faire for the summer. Although it’s out of her comfort zone, she starts to enjoy it all except for the moments she has to deal with one moody teacher who takes the faire a little too seriously.

Emily quickly learns that Simon hates change and that her being there is causing change so they don’t get off on the right foot. But Emily also notices how Simon’s personality changes when he’s in costume and she can get along with this version of him.

The more time the two spend together, the more they start to understand one another and their feelings begin to grow. Emily has to decide whether she’s ready to stay in town permanently and give Simon a real chance or run away again in Well Met.

The memory of first love can be deceiving. Some may think of it fondly or compare every relationship afterwards to it.

While Lara was in high school, she was tired of everyone being a complete copy of one another so she wanted to be different. She dressed like a punk girl and was mostly vegetarian. But when she met the cool Alex, who was in a band and vegan, she knew he was the one.

Much like in Today Tonight Tomorrow, Lara and Alex didn’t get along at first but that was part of Lara’s plan to show him she was different from other girls who were throwing themselves at him. The two do end up dating for two years but sometimes people grow apart.

Love at any age isn’t simple or easy. When their Punk Love is put to the test, will it stand a chance or break on impact?

Simmer Down, by Sarah Smith

For Nikki, family is one of the most important things in life. So important that she quits the job she loves to help her mom with the family’s Filipino food truck in Maui.

When she starts working at the truck, she had no idea how competitive and vicious the truck business is and soon finds herself battling it out with the British guy set up next to her. They argue so much that their feud goes public, which helps both of their businesses.

While the two start working together to bring in customers and even make a bet to see who sells the most at the Maui Food Festival where the winner keeps the parking spot, they soon lean into the attraction.

If they call a truce, will Nikki Simmer Down and risk getting burned in order to explore where the sparks may lead?

We’re all familiar with the tale as old as time of enemies-to-lovers and if you’re a fan, then you will love this list of books similar to Today Tonight Tomorrow. Because sometimes you might just need to jump the line from hate over to love and give happiness a chance.

Are you looking for more books like Today Tonight Tomorrow? Have any recommendations that didn’t make the list? Let us know in the comments!