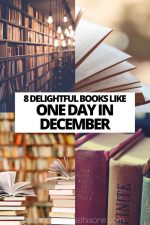 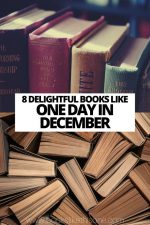 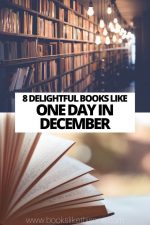 There is nothing quite like the big satisfying sigh you make when you come to the end of wonderfully romantic books like One Day in December.

We all want to know that our soul mate is somewhere out there just waiting for us to find them. But what if you found him one cold December day and, before you had time to declare your undying love for him, you were parted?

This is the conundrum faced by our main character in One Day in December, Laurie, who sees a guy reading a book at the bus shelter. There is a shared look of something magic between them before the bus drives away with Laurie still on it.

She keeps her eyes peeled for him over the next year and finally sees him again when Sarah, her best friend, introduces her new boyfriend to Laurie at a party – it’s Jack, the guy from the bus stop.

What follows is a decade of missed opportunities, proving that you may have found your soul mate but fate may not make things easy. So, if you’ve ever let ‘the one’ get away and are seeking more books like One Day in December to give you hope that fate knows what it’s doing, then look no further.

In this book like One Day in December our heroine, Laurie Watkinson, has found her ‘one’; they have been together for eighteen years but he’s just told her he wants out of the relationship. This brings us to the question running through If I Never Met You – can Laurie find another soul mate?

If being dumped isn’t bad enough, Laurie works in the same law firm as her ex-boyfriend, Dan Price, and he’s already moved on. She now needs someone to fill in so she can avoid the pity stares from her colleagues and show Dan that she isn’t going to break without him.

This is where Jamie Carter comes in; a handsome, lady’s man who also works at the firm. He is the opposite of Dan and Laurie thinks he’s superficial but a chance meeting in a dodgy lift sees them hatching a plan which should benefit both their careers and social standing.

The plan is going well, Jamie gets the reputation upgrade needed for his advancement at the firm and Laurie gets to flaunt her hot new boyfriend in front of Dan and his new girlfriend – but the lines between fake and fate soon become blurred for them both.

Another tale of destiny between two souls is A Love Like This by Irish author, Maria Duffy.

The story begins in Dublin 1985 with two babies being born to very different families on the same day. One baby is Donna, born to an alcoholic mother; her life is one big struggle to survive; the other baby is Will, son of career-driven affluent parents who lives a life of luxury.

Fate or coincidence continues to throw Donna and Will into each other’s paths over the next few years but misunderstandings and missed opportunities keep them from meeting. That is, until their lives finally collide in New Zealand.

If you are searching for a book about ‘the one’, fate and soul mates and you enjoyed One Day in December then put A Love Like This on your wish list.

The Things I Know, by Amanda Prowse

It is said that there is someone out there for everyone; even if we don’t think we’re worthy, the God of Love says otherwise.

Our main character in The Things I Know is Thomasina Waycott (AKA Hitch) who lives and works on her family’s farm and B&B. The farm is remote and Hitch wants to experience more life – including love, but she’s not sure that will ever happen.

She has a scarred lip, a weak heart and a twisted foot; she has been teased her whole life and her family want to protect her.

Then one day Grayson Potts comes to stay at the B&B. He doesn’t see Thomasina the way others do; he doesn’t notice her scars or deformity, he just sees a girl with a good heart who, in turn, doesn’t notice his own flaws.

Finally, Hitch can fall in love and still be herself but cupid doesn’t make thing too easy as Grayson lives miles away and they both have different work commitments.

Will Thomasina and Grayson find a way? If you want to know what fate has in store for them then you’ll need to read this beautifully-written novel like One Day in December.

Breakfast Under the Cornish Sun, by Samantha Tonge

Our heroine has a specific type of man in mind and she will have to seek him out.

Kate Golightly works in a cafe/bar with her best friend and boss, Izzy. Kate has recently had her heartbroken and is now single, but that doesn’t stop her from accepting an invitation to a wedding for herself and her new boyfriend who doesn’t exist but apparently looks like Ross Poldark. The bride is her nemesis from school and is looking forward to meeting the new love in Kate’s life.

Kate and Izzy set off for a much-needed break to a holiday park in Cornwall, where Kate has two weeks to find her new boyfriend and help the owners of the holiday park to resurrect their failing business.

So, if you’re looking for books similar to One Day in December with some added fun, then look no further than Breakfast Under the Cornish Sun.

Bet Me, by Jennifer Crusie

Do you believe in fate, kismet or destiny? Do you want true love with the man of your dreams to be in the hands of someone or something else so you can just do your part by following the clues? In Bet Me, it is both parties who need a nudge in the direction of their destiny.

Minerva Dobbs doesn’t believe in love at first sight and fairytale endings and neither does Calvin Morrisey: the guy who asks her on a date for a bet.

Calvin is sexy and successful and thinks commitment is for other people and Minerva has no desire for a second date with him – but fate has its own agenda.

With her sister’s impending wedding and her need for a date, an overbearing mother and not being perfect, Min has to decide whether to chance another date with Cal.

To her surprise, and his, Cal steps in and he might just be the person Min needs to blossom.

If you think that opposites do attract and make the best partnerships, then you’ll want to read this book like One Day in December.

A Christmas to Remember, by Jenny Hale

Think The Sound of Music at Christmas with this book like One Day in December.

Carrie Baker loves being a nanny but she spends all her time with families that aren’t her own. Her New Year’s resolution is to find a new career and a love life so she can start working on a family of her own. She just has one last job working with a new family over the Christmas period.

Single father Adam Fletcher runs a successful business but is not doing so well at being a successful father. When Carrie is employed to take care of his children, she points out this fact to him which sees the two of them at odds as to what her role should be. Carrie is convinced that her new boss is her soul mate; he just needs some adjustment.

Over time, Carrie not only becomes an important part of Adam’s children’s lives but his extended family is enjoying their inclusion back into Adam’s life too as Carrie encourages them to participate in the Christmas festivities.

Will Adam finally see what the rest of his family see in her?

I must confess to reading A Christmas to Remember every December. It encompasses everything that love and Christmas is about – enchanting.

This iconic novel like One Day in December is an epistolary (hence the title) told by Bridget Jones; a thirty-something non-perfect woman who is destined to remain single forever.

That is until Daniel Cleaver and Mark Darcy enter her life. Daniel is her sexy laid-back boss at the office and Mark is the son of a family friend; an environmental lawyer who has a permanent stick up his butt.

Bridget is unfocused and generally lives her life in a haphazard manner of booze and cigarettes with her three best friends for support. She falls for Daniel but fate seems to think she should be with Mark Darcy and keeps throwing them together.

Eventually, we find out that Mark rather likes the ridiculous Bridget and after being badly hurt by Daniel, Bridget lets her guard down and begins to look at Mark in a different light.

If you love a laugh-out-loud romance about finding your soul mate then you really need to read Bridget Jones’s Diary.

As I often do for my last suggestion, I am guiding you to a classic that will indulge your romantic side and open your mind to the majesty of the English language. I give you one of the most-read novels of all time (probably!) – Pride and Prejudice.

They say we only have ten seconds to make a first impression and that was all Laurie needed in One Day in December. This classic novel is also themed around first impressions – only this time they’re not good.

When Elizabeth Bennett first meets the austere and aloof Mr Darcy, her initial impression is that he is a proud, arrogant man who could do with learning a few manners from his friend Mr Bingley.

Mr Darcy has no real opinion of Elizabeth Bennett as she is of no consequence to him.

This is a relationship that builds over time: he has to overcome his pride and she her prejudice against him. Navigating the usual misunderstandings and miscommunications, Elizabeth and Charles Darcy realise they are indeed a perfect match.

If you liked One Day in December and are a big fan of Bridget Jones’s Diary, then I urge you to read the original story.

Already know and love this classic novel? Check out our list of more books like Pride and Prejudice!

So, Do you believe in love at first sight or that we all have a soul mate? If you are on the fence and need a little push to help you fall, then read all of the books like One Day in December in the above list.

Are you looking for more books like One Day in December? Have any recommendations that didn’t make the list? Let us know in the comments! 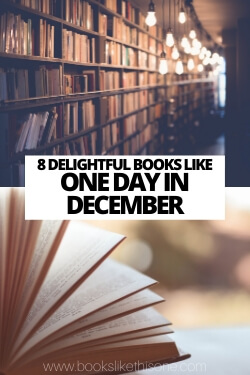