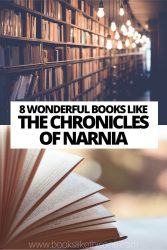 Are you looking for more books like The Chronicles of Narnia?

There aren’t many people who haven’t heard of The Chronicles of Narnia. Whilst The Lion, The Witch and the Wardrobe has enjoyed the most recognition, the other books in the series further explore the magical land of Narnia and the various characters within.

Two of my favourites, The Horse and His Boy and The Magician’s Nephew (set before the events of The Lion the Witch and the Wardrobe) deal with the more fantastical elements of Narnia. In fact, the plot of The Horse and his Boy is set entirely in Narnia, with no intrusions from “our world” to be seen at all.

However, if you’ve already galloped through the series, what other books like Narnia are out there?

The Castle in the Attic, by Elizabeth Winthrop

I am most likely biased because the protagonist’s name in The Castle in the Attic is ‘William’ and my middle name is William.

William is delighted with his new present; an old and very real-looking model of a castle, complete with drawbridge and a tiny knight to guard the gates. Of course, William doesn’t expect Sir Simon to come alive when he picks the knight up.

Soon, William is transported into the land of the castle to do battle with a dragon and an evil wizard. There is a lot to love about this quirky novel that follows William as he is shrunk down to Sir Simon’s size and thrust into a magical adventure.

If you enjoy books like The Chronicles of Narnia, you will devour this.

Books like Narnia come in all shapes and sizes. Scavengers seems like an odd comparison at first glance, but give it a chance, because this tale of a boy called Landfill and his guardian Babagoo is filled with wonder and magic.

Landfill has lived his entire life as a scavenger in a rubbish tip encircled by ‘the wall’. Babagoo watches over Landfill as he swims with turtles, runs with wooflers and eats seagulls (ugh!). Yet, Landfill has always wanted to see what’s above the wall… This novel is a thought-provoking story tinged with a gritty edge.

What is the key Babagoo keeps around his neck? Are the Outsiders as dangerous as Babagoo says? You’ll be as desperate as Landfill in his quest to discover what lies beyond the wall.

Through the Mirror Door, by Sarah Baker

There are some books similar to The Chronicles of Narnia that enjoy setting your teeth on edge. Much like The Silver Chair, Through the Mirror Door delights in delving into the darkest corners of magic.

Angela has been alone since her accident but when she is invited to go on holiday with her cousins, she feels it is a chance at normality. Yet, the French holiday home is hiding many secrets and a boy who needs Angela’s help.

Spooky, creepy and filled with forbidden rooms and a hidden doorway, Through the Mirror Door will keep you reading until the very last page.

The Wolves of Willoughby Chase, by Joan Aiken

When Bonnie’s parents leave Willoughby Chase for a sea voyage, Bonnie and her cousin Sylvia are left in the care of Miss Slighcarp (think of the White Witch but nastier), a cruel and disconcerting governess.

After she sends Bonnie and Sylvia to a prison-like school, Bonnie and her cousin must enlist the help of Simon, his flock of geese, and their combined wits to defeat Miss Slighcarp and free Willoughby Chase from her evil clutches.

Books like Narnia work best when they subvert your expectations and you suddenly realise the world you’re in is similar, yet completely different to our own. The Wolves of Willoughby Chase is set in an alternate history of England, but you don’t realise it straight away.

Although any place you can trust in geese is definitely not our world.

His Dark Materials, by Philip Pullman

It is difficult to talk about books like The Chronicles of Narnia without mentioning His Dark Materials. Pullman’s dismantling critique of religious organisations might have upset CS Lewis, but protagonist Lyra Belacqua would simply raise her nose and dismiss Lewis as a relic from an older time.

Living in an alternate version of Oxford University with her daemon Pantalaimon (Pan), Lyra embarks on a quest to find and rescue her friend Roger when he disappears. Armed only with cunning, a silver-tongued way with the truth, and the mysterious alethiometer, you can’t help but fall in love with Lyra and the worlds she walks through.

If you’ve already read the book series, check out the BBC’s excellent serial adaptation starring Dafne Keen. But do read the books. They are superb.

The Wild Folk, by Sylvia Lindsteadt

If you love the fantasy and folk-lore element in books like Narnia, you should enjoy The Wild Folk.

After the Star-Priest Brotherhood from the City threatens the land of the Wild Folk, the only hope lies with Tin, an orphaned boy-inventor and the country girl Comfrey. Very soon, Tin and Comfrey find themselves having to complete a series of near-impossible tasks set by the strange and frightening Wild Folk.

Accompanied by two young hares, the children travel through villages and forests, trying to keep one step ahead of the pursuing Brothers and save the land. The Wild Folk is a fantastic and engrossing read guaranteed to transport you from our world and into the magic of your imagination.

I discovered Coraline through the wonderfully creepy 2009 film produced by Laika animation and director Henry Selleck. Having read the book and watched the film, for me, this was a rare occasion where the adaptation exceeded the standard of the source material.

You should check both the book and film out though, and if you enjoy books similar to Narnia, Coraline will have something for you.

Other Mother and Other Father coo and coddle Coraline, but there’s just something not quite right about the buttons they have for eyes…

Read the book. Watch the film adaptation. Pull the covers over your head and hope there isn’t an Other Mother waiting behind a little door in your house.

An apprentice monk? Peace-loving mice? A quest to discover a legendary lost weapon? Count me in.

Books like The Chronicles of Narnia often anthropomorphise animals to great effect and Redwall is no exception.

Redwall Abbey is a tranquil home to the peaceful mice, but when it’s threatened by a bilge rat called Cluny ‘the Scourge’, bumbling young apprentice monk Matthias is called to action. Redwall is just the first of many books in this middle-grade series, but it remains one of my favourites.

Some of the best parts make me chuckle and gasp, and Jaques’s descriptions of food still resonate. If you love the Narnia books, you’ll love this.

Books like Narnia use magic, mayhem and sometimes religious themes to tell a great story. There are many similar titles to explore beyond CS Lewis’s series, but if you think we’ve missed one of your favourites, let us know in the comments below.

Are you looking for more books similar to The Chronicles of Narnia? Have any recommendations that didn’t make the list? Let us know in the comments! 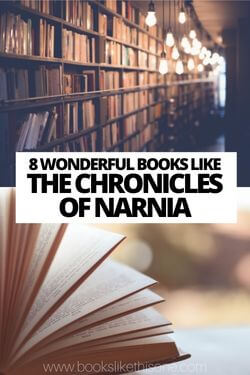