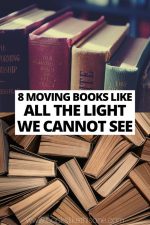 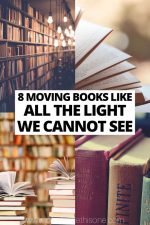 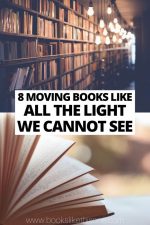 Books like All The Light We Cannot See have an astounding ability to touch your heart even if historical fiction isn’t a genre you are normally fond of. Set during the heart-rending devastation of World War II the novel centres around a blind French girl called Marie-Laure and a German boy called Werner. The lives of both characters interweave as we witness them try to survive amidst the grief and sorrow of war-torn France.

Written by the multi-award-winning Anthony Doerr who can now add the Pulitzer Prize to his many accolades thanks to All The Light We Cannot See. His prose is bewitching and so richly detailed that it invokes a sort of synaesthesia stimulating all the senses at once and quite clearly justifies why the novel is worthy of such high acclaim.

If you are looking for more books like All The Light We Cannot See to captivate you then check out the list compiled below. All the novels are innovative stories, illuminatingly written and provide examples of different ways human nature can triumph, even while enduring the most unthinkable hardship.

Themes of morality, love, language and of course literature are prevalent throughout Markus Zusak’s international bestseller The Book Thief, a novel I am sure will keep fans of books like All The Light We Cannot See thoroughly enthralled.

The story is narrated by Death but centres around the protagonist Liesel Meminger, a young girl who is fascinated by the power of the written word and finds solace in reading during the time of bloodshed in Nazi Germany. Liesel loves books, so much so that she soon starts stealing them, saving them from being burnt at the hands of the Nazi’s. But when her foster family decides to hide a Jew in their basement, her book thieving isn’t the only secret she is forced to keep.

As you can imagine Death is particularly busy during the novel which offers readers an alternative view on humanity as Death is just as haunted by humans as we are of dying. An innovative idea which is superbly crafted by Zusak it really is no surprise that The Book Thief has sold over 16 million copies worldwide and is so universally adored.

The Paris Architect, by Charles Belfoure

Charles Belfoure’s debut, The Paris Architect beautifully demonstrates the two opposing sides of human nature; a capacity for extreme cruelty and one for tremendous kindness as we witness reluctant hero Lucien Bernard get drawn into a Nazi resistance.

Set in Nazi-occupied Paris where he works as an architect, Lucien is similar to most of his social class in that he stays away from the conflict between the Nazi’s and Jews having little sympathy for either side.

However, all that changes when he accepts a handsome amount of money to devise secret hiding places for Jews inside buildings. Lucien soon starts creating cunning and ingenious hideaways behind paintings and inside piping, but when one of his hiding places is discovered Lucien can no longer deny or ignore the inhumane suffering going on around him.

Expertly composed with interesting architectural elements that imbue every page and interlace perfectly with the gripping narrative and Belfoure’s beautiful prose. The Paris Architect is guaranteed to pull you further in with each word making it the perfect next read for anyone looking for books similar to All The Light We Cannot See.

Heather Morris’s chronicle of a Slovakian Jew who tattooed numbers onto those imprisoned at Auschwitz is based on the experiences of Lale Sokolov in her popular novel The Tattooist of Auschwitz. A captive in Auschwitz for over two years, Lale witnessed unspeakable atrocities while permanently branding his fellow prisoners with what would become a constant reminder of the horrors of the Holocaust.

Lale was in a privileged position compared with others, a position he used for good by risking his life to provide food for other prisoners by exchanging the jewellery and money of those recently murdered. When Lale tattoos the number 34902 onto the arm of a terrified girl called Gita, he pledges to protect her and eventually marry her if they both are able to survive the camp.

Both harrowing and hopeful all at once The Tattooist of Auschwitz is a poignant example of human endurance and how it is possible to find love even in the most hopeless of situations.

Another compulsive page-turner that you won’t stop reading until it is completely devoured, The Tattooist of Auschwitz a great fit for those looking for more books like All The Light We Cannot See.

Diana Gabaldon’s Outlander is the first novel in her immensely popular book series which blends drama, history, romance and science fiction together into a rather addictive read. The plot is sublime and will thrill anyone looking for more novels like All The Light We Cannot See.

The series focuses on the central character Claire Randall, a combat nurse from the year 1945 who unwittingly crosses a circle of ancient standing stones while on honeymoon in Scotland with her husband. These stones catapult her back in time to the war-torn Scotland of 1743, where violence and savagery rule the rival clans.

Unsure of how she got there Claire soon starts wrestling with her feelings for the heroic Scottish warrior James Fraser and finding a way back to her own time and her husband. Timezones and continents are crossed in Gabaldon’s mile a minute novel, Outlander and the books that follow it are certainly able to fill any void left behind by All The Light We Cannot See.

In a similar vein to the duality of Claire Randall’s life in the aforementioned Outlander, Life After Life by Kate Atkinson tackles multiple lives in this intricately constructed and dizzying work of fiction.

The novel charts the many lives and deaths of Ursula Todd, a woman born in 1910 who as she grows also dies and in a variety of ways including getting strangled by her own umbilical cord, drowning and by contracting Spanish Flu to name a few. With an infinite amount of lives and the second world war fast approaching Ursula tries to use her unusual gift for the good of humanity and ultimately change the course of history.

The novel continuously loops back depicting another alternative life and outcome for the character, once you are able to get a grip on this then you can really appreciate the complexity of the narrative. Atkinson’s Life After Life is an ingenious idea and plagues the eternal question; what if I had the chance to do it again?

As joyous as it is painful, anyone looking for books similar to All The Light We Cannot See will certainly enjoy reading about the many lives of Ursula Todd too.

Water For Elephants, by Sara Gruen

We step away from World Wars in the next novel on this list of moving books like All The Light We Cannot See is Sara Gruen’s illuminating tale Water For Elephants. From the confines of his nursing home, Jacob Jankowski recalls memories from his youth as a vet of a travelling circus during the Great Depression.

It was around 1932 when Jacob became orphaned, in a state of shock and depression he launched himself onto a passing rickety train and into the drifting world of freaks and misfits of the circus, for the train he jumped onto housed the ‘Benzini Brothers Most Spectacular Show On Earth!’

Soon he starts caring for the animals and becomes particularly taken with a seemingly untrainable elephant called Rosie but more so with Marlena the beautiful and talented star performer of the equestrian act.

Marlena is married to August, the unpredictable, paranoid animal trainer who, despite his best efforts, is unable to keep the star-crossed lovers Jacob and Marlena apart. An exquisite depiction of the power of love amidst periods of cultural misery, Gruen’s beautifully written Water For Elephants is a truly wonderful read.

If you like All The Light We Cannot See for its deftly interweaving narrative then I am sure you will thoroughly enjoy the alternating letters in Mary Ann Shaffer’s and Annie Barrows’ collaborative The Guernsey Literary and Potato Peel Pie Society.

Set during 1946 when the cloud of World War II was slowly starting to lift, writer Juliet Ashton is searching for inspiration for her next book. When she receives a letter postmarked Guernsey from a man she has never met, Juliet embarks on a truly fascinating correspondence with members of The Guernsey Literary and Potato Peel Pie Society. A society spontaneously born as an alibi and excuse for breaking curfew when German soldiers occupied the island.

Juliet quickly becomes captivated by the stories she reads and what she learns about the strangers on the Island along with their experiences with the German troops. So much so in fact that she soon embarks on a journey to Guernsey to meet them in person.

A heartwarming story which celebrates literature, friendship and the magic of human connection, a thoroughly affecting read The Guernsey Literature and Potato Peel Pie Society will make you laugh and cry.

We end our moving list of books like All The Light We Cannot See with a whopper! A non-fiction book by Laura Hillenbrand based on the life of Louis Zamperini — former Olympian, prisoner of war and ultimate hero, Unbroken charts his remarkable story of survival.

Told through his eyes, after being drafted into the United States Army Air Corps, a plane Zamperini was travelling on failed and crashed into the Pacific Ocean. He and only two other survivors spent 47 days drifting on a life raft before being picked up by the Japanese and placed in their brutal hedonistic camps. Zamperini spent more than two years imprisoned before being rescued, enduring various forms of torture and abuse.

Published in 2010, Unbroken has spent over 4 years on the New York Times Bestseller List, has become one of the longest-running best selling non-fiction books of all time and been made into an epic film. Zamperini’s was definitely a story that needed to be told, it will shock, astound and inspire you and is an absolutely exquisite example of human endurance.

Though these novels technically remain in the historical genre I truly believe you will consider yourself a convert once you have worked your way through this list of imaginative, touching books like All The Light We Cannot See. Prepare to be moved!

Are you looking for more books like All The Light We Cannot See? Have any recommendations that didn’t make the list? Let us know in the comments! 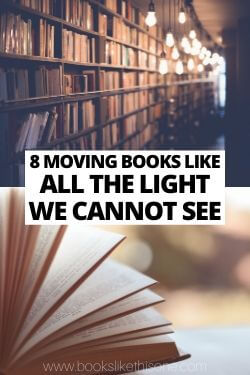