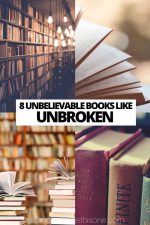 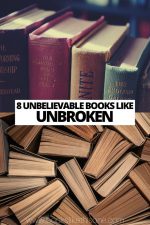 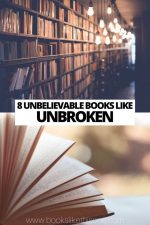 Love non-fiction but looking for something that reads a bit more like fiction? Then look no further than this list of narrative non-fiction books like Unbroken: A World War II Story of Survival, Resilience and Redemption.

Unbroken tells the unbelievable story of Louis Zamperini, a competitor in the 1936 Olympics who was forced to take his competitive nature off the track in the ultimate race of his life; survival.

Zamperini survived a plane crash, 47 days adrift in the Pacific Ocean, years as a Japanese prisoner of war enduring unspeakable physical and psychological torture and a turbulent readjustment to life following his eventual release. Hillenbrand has uncovered the gripping true story of the life of a truly unbreakable man.

The stories which feature on this list of books like Unbroken include some other amazing examples of human endurance and survival, as well as some remarkable accomplishments across mathematics, architecture, sports and resourcefulness in the face of adversity. They are all stories like Zamperini’s that, as you will see, need to be told and shared.

The Revenant, by Michale Punke

The events which make books similar to Unbroken are so incredible, they are often the basis of equally awesome films too which is the case of our first book The Revenant by Michael Punke.

Based on the life of Hugh Glass, an experienced frontiersman and tracker for the Rocky Mountain Fur Company during the 1820s, his is a story of determination, strength and an unbelievable obsession with getting revenge.

During a routine scouting mission Glass was savagely mauled by a grizzly bear, his wounds were so severe the rest of his party didn’t expect him to survive. Two men were instructed to stay with Glass until his eventual death while the rest carried on with the mission.

But fearing an attack, his cowardly companions stole his weaponry and left him to die alone, this fuelled Glass with the compulsion to not only survive but exact revenge on the two men that betrayed him. The Revenant is an astonishing true story and Punke’s graphic and gritty account will remain with you long after you have finished reading.

In The Heart Of The Sea, by Nathanial Philbrick

If you like Unbroken for the part of the story where Zamperini is lost at sea, then you are sure to enjoy reading In the Heart of the Sea: The Tragedy of the Whaleship Essex too.

Nathanial Philbrick’s tragic reimagining of the fate of The Essex, an American whaleship which sank in the middle of the Pacific Ocean following an unforeseen run-in with a sperm whale during the 1820s. With the ship set for the bottom of the ocean, the crew descended into the smaller whaling boats and attempted to sail back to South America.

Unfortunately, the majority of them die of starvation, dehydration or as a result of cannibalism before a rescue mission finds them after three months lost at sea in February 1821. To piece together In the Heart of the Sea, Philbrick utilises accounts from two of the survivors — the ship’s teenage cabin boy and first mate who later wrote about their traumatising ordeal.

These unimaginable true events are said to be the inspiration behind Herman Melville’s epic Moby Dick and the recent motion picture of the same name starring Chris Hemsworth.

Not only did Katherine Johnson, Dorothy Vaughan and Mary Jackson have to overcome sexism in the workplace being women in a heavily male-dominated industry, they also had to overcome racism being black in a mainly white-dominated environment.

Hidden Figures: The American Dream and the Untold Story of the Black Women Who Helped Win the Space Race, is the amazing story of these three remarkable women, their outstanding contributions to science, mathematics and engineering along with their pivotal involvement making the US ‘space race’ a successful mission.

All three women stood up to the discrimination and segregation they faced to not only save the space mission but also make waves in both the race and women’s movements, paving the way for others like them.

Margot Lee Shetterly was inspired to share their incredible story by her father who worked at NASA with all three ladies during the same period. It is a story which up until now had just been glossed over making Hidden Figures a worthy addition to this list of books like Unbroken.

The Zookeeper’s Wife, by Dianne Ackerman

Dianne Ackerman is a renowned poet and naturalist which is evident by the beautiful prose in her non-fiction success The Zookeeper’s Wife, the true story of Antonina and her husband Jan Żabiński the director of the thriving Warsaw zoo.

Following the German invasion of Poland in 1939, a lot of the zoo’s structure was destroyed along with the animals. forcing Jan and Antonina to close the premises and remain in their home, a villa within the zoo’s grounds. Soon they both become engrained in the underground Polish resistance by sheltering Jews in the grounds of the zoo before secretly helping them escape the fate of the infamous Warsaw ghettos, putting their own lives at risk in the process.

According to Antonina’s diary which the novel is based on, she and her husband helped an astounding 300 Jews survive the war, not just the safe keeper of animals but the safe keeper of people The Zookeeper’s Wife is a beautiful story of hope and survival and is a moving read for those looking for books similar to Unbroken.

The Devil in the White City, by Erik Larson

All the tales from the fair form Erik Larson’s novel The Devil in the White City which chronicles the prominent figures involved in the 1893 World’s Columbian Exposition in Chicago also known as the World’s Fair.

The book is split into four sections and follows two distinct plotlines which interweave, the story of Daniel Burnham the architect involved in building the fair, and Dr H. H. Holmes named now as the first modern serial killer who used the fair to find fresh victims.

The plot concerning Burnham follows the personal and professional struggles that he faced while planning and building the fair. The other more vivid plot concerning Dr H. H. Holmes sees him plan his elaborate ‘Murder Castle’ an abandoned building across the street from the fair, through to his eventual imprisonment by police.

Though not a story of survival as in other books like Unbroken, The Devil in the White City is a shocking true story that will pull you into the lives of these men making history, but for very different reasons.

John Hersey’s masterpiece Hiroshima has never been out of print since publication in 1946 and it’s not difficult to understand why. Hersey tells the story of six survivors of the 1945 atomic bomb dropped on Hiroshima by piecing together their memories of what happened on that fateful day which killed an estimated 135,000 people obliterating 90% of the city.

The book starts by describing their mornings leading up to the bomb drop as events unfurl and their lives interweave revealing similarly horrific experiences. Hersey writes with eloquence and compassion despite including some quite graphic detail of the effects of the radiation from the blast, including melted eyeballs and vaporisation.

Initially printed in The New Yorker and meant to be spread over 4 issues in instalments, Hersey’s account was published in full as it was considered something that everyone needed to be aware of immediately. The style of writing was pioneered as ‘New Journalism’ which is non-fiction writing using creative and narrative fiction techniques making Hiroshima a fitting addition to this list of books like Unbroken.

Into Thin Air, by Jon Krakauer

Famed mountaineering-journalist Jon Krakauer is known for his daring climbs and explorations. His memoir Into Thin Air chronicles his experiences climbing Mt Everest on a harrowing expedition during the May of 1996 which claimed the lives of 8 other climbers and left many others stranded by a blizzard. It is an interesting, harrowing, brave account of endurance and survival and a great read for fans of books like Unbroken.

What initially started out as an article discussing the commercialisation of the mountain, turned into a full-scale expedition to the summit — one that has gone down in history as one of the deadliest. His memoir moves between his training and preparation for the expedition and the tragic events which occurred during the push for the summit.

Krakauer casts judgement on some of the safety measures which were compromised because of an alleged rivalry between different climbing agencies. This caused uproar amongst other survivors of the climb when Into Thin Air was published and instigated a sequence of rebuttal novels telling their version of events.

The Boys in The Boat, by Daniel James Brown

If you liked learning about Zamperini’s Olympic progress on the track in Unbroken then you are sure to enjoy The Boys in the Boat too, the story of Washington University’s eight-oar crew and their mission for a gold medal in the 1936 Berlin Olympics.

The boys were all sons of working-class loggers who had to compete against the rowing elite from Europe and the East and ultimately the German crew rowing for Adolf Hitler. It is a dramatic tale of perseverance, beating the odds and remaining hopeful during particularly enduring times.

Team member Joe Rantz provides readers with an emotional twist to the story, Rantz is without prospects outside of the team and rows not for the glory but for the family that the team and enigmatic coach creates.

The Boys in the Boat is a heart warming story, author Daniel James Brown drew on diaries, photographs, journals and memories from the team to piece together this once in a lifetime dream they shared so that we can share in it too.

Who says it is impossible to truly escape in a non-fiction book?

It certainly isn’t impossible with books like Unbroken, these unbelievably true stories of human strength, courage, determination and focus will keep you engrossed until the very last page.

Are you looking for more books like Unbroken? Have any recommendations that didn’t make the list? Let us know in the comments! 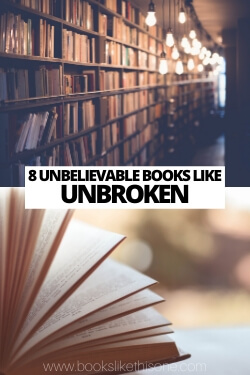