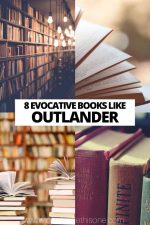 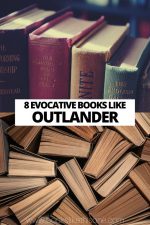 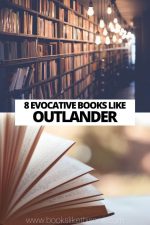 It is easy to get so lost in a book that you become saddened when you finish it, wishing it could just carry on going, this is what makes a series of books like Outlander so appealing.

Diana Gabaldon’s dramatic, time travelling, historical romance, Outlander follows the life of Claire Randall, a former combat nurse from 1945 who somehow gets transported back in time to the rebellious and war-torn Scotland of the 1700s.

As Claire tries to find a way back to her own time and to her husband, she unwittingly starts falling for the heroic Scottish warrior Jamie Fraser. Battling feelings of guilt, Claire soon becomes torn between her old life in the present or staying with Jamie and ultimately changing the course of history forever.

If you are looking for more books like Outlander to fall in love with while waiting for the release of Gabaldon’s next instalment in the series then check out the list of novels below. They are a compelling mix of serials and stand-alone stories, some which involve time travel and some that will cause you to quite literally get lost in time reading.

A Song of Ice and Fire, by George R. R. Martin

I will kickstart this list of transportive books similar to Outlander with another compulsive serial, also an incredibly popular television series George R. R. Martin’s epic A Song of Ice And Fire.

Perhaps most recognisable by the title of the first instalment A Game of Thrones, Martin’s gritty fantasy drama transports us to the fictional and fantastical lands of Westeros and Essos.

There are three principle storylines which all interweave in the five books that have been published so far; there is the ongoing dynastic unrest between the most powerful families across the seven kingdoms of Westeros, the claim to the Iron Throne from exiled ruler Daenerys Targaryen who is forming an army to try and take back control and lastly the looming threat of the supernatural ‘Others’ approaching from the north.

The stories are told through the perspectives of multiple characters whose lives become entangled as events unfurl.

Martin has an amazing ability to hook readers in immediately so much so that it soon becomes impossible to get out which is what makes A Song of Ice and Fire the perfect series to get lost in.

Reminiscent at times of Claire’s predicaments and some of her adventures during Outlander, Daphne du Maurier’s 1941 historical novel Frenchman’s Creek tells the story of a love affair between an English Lady and a French pirate.

Lady Dona St Columb is restless, impulsive and bored of her reserved life in the circles of London’s high society. She longs for adventure and upon escaping to the remote British countryside of Cornwall she finds all the adventure she craved in Jean-Benoit Aubéry, a French pirate whom she quickly falls in love with.

Dona soon gets swept up in the pirate’s style of life; expeditions fuelled with uncertainty, risk and glory. But when one such expedition results in Aubréy’s capture, Dona is forced to make a troubling decision; risk her life to try and save her lover or return to her quiet cultured life in London with her husband and children ultimately sending Aubéry to his death.

Frenchman’s Creek is a swashbuckling story of love and excitement where an unexpected heroine is born, a thrilling read for anyone on the hunt for books similar to Outlander.

Kate Atkinson is an author known for her incredible imagination and deft storytelling and her 1997 novel Human Croquet is no different. It tells us the story of the Fairfax’s, a family plagued by a 300-year-old curse and explores the disappointments, possibilities and secrets that every family hoards.

Told through the eyes of Isobel Fairfax, a 16-year-old girl growing up in the suburbs of 1960’s England in a place steeped in as much history as that of her family’s.

As Isobel investigates the mysteries surrounding her lineage including her mother’s disappearance and father’s long absences, she slips in and out of time briefly experiencing life in Shakespearean England which helps her get closer to discovering the shocking truth.

A mixture of fantasy, mystery and coming-of-age, Human Croquet ticks a lot of the boxes which people looking for more novels like Outlander will definitely enjoy.

Hilary Mantel’s popular series is brought to a close this year with her latest release The Mirror & the Light which finishes her trilogy about the unforgettable aid to the tyrannous Henry VIII, Thomas Cromwell.

Starting with the first instalment Wolf Hall followed by Bring Up the Bodies, both previous Booker Prize winners, the series charts Cromwell’s life. From his humble beginnings to how he eventually became one of the most influential men in the court of the King until his imminent downfall from a position of such great power.

Mantel thrusts the reader right into the epicentre of Henry VIII’s entourage where we become embroiled in a war of deceit, power struggles, violence, corruption and religion as pressures rise to ensure the King has a male heir to carry on his legacy.

Those fans of books like Outlander searching for another series to disappear into will certainly find it in Mantel’s Thomas Cromwell Trilogy.

The Other Boleyn Girl, by Philippa Gregory

We remain in historical England with King Henry and one of his wives for the next book on this list of novels similar to Outlander. Philippa Gregory’s The Other Boleyn Girl is one of many books in her The Plantagenet and Tudor Novels, a series charting the unheard stories of royal women which Gregory has become renowned for.

Loosely based on the life of the lesser-known Boleyn sister, Mary, who lived to tell the tale of the exciting and dangerous reign of King Henry VIII. At 14 years of age, Mary not only falls in love with the King but also with designs on the throne and being Queen.

However, the King and her family have other plans so Mary is forced to step aside despite bearing Henry’s illegitimate son as her younger sister, Anne, is groomed to become his Queen.

The Other Boleyn Girl is a thoroughly gripping novel of passion, secrets, desire and determination that any fan of Outlander is sure to enjoy.

Time and Again, by Jack Finney

If you like Outlander for its combination of several literary genres then you will also like Time and Again by Jack Finney. The novel mixes mystery, romance and science fiction genres with vivid images of Old New York which are weaved into this extraordinary tale that will remain in the reader’s mind long after they have finished the novel.

Curious about an unexplained incident that happened historically to his girlfriend’s family, Si happily volunteers and travels back to the New York of 1882 to try and solve the mystery not knowing that doing so could ultimately change history as we know it.

Time and Again explores themes of personal responsibility and our relationships with the past and present as while on the case, Si falls in love and ends up getting torn like Claire Randallbetween returning to his life in the present or remaining lost in the past forever.

The Pillars of the Earth, by Ken Follett

The Pillars of the Earth is the first novel in the Kingsbridge series from the critically acclaimed author Ken Follett. Set in medieval England during the twelfth century when the country was on the brink of civil war, the novel centres around the construction of a spectacular Gothic cathedral in the fictional town of Kingsbridge.

Follett incredibly articulates the many lives of the characters involved in building the cathedral along with those who want to destroy it, as their actions interweave and link together in this epic story of love, revenge and betrayal.

Steeped in history with castles, knights, rivalry, intrigue, architecture and the beautiful imagery of medieval England, there is truly something for everyone in The Pillars of the Earth and the books that follow it; World Without End and A Column of Fire. For that reason, Follett’s Kingsbridge collection is sure to keep fans of books like Outlander enthralled for a long time.

Already read this book? Check out our list of more books like The Pillars of the Earth!

If it is the love story between Claire and Jamie in Outlander that keeps you coming back for more, then we end this list of transportive books like it with the ultimate tale of love. Love Story is the vastly adored novel by Erich Segal which has simultaneously defined love and broke the hearts of many generations since publication in 1970.

Opposites Oliver Barrett IV and Jenny Cavilleri are from different worlds, he is a wealthy athlete on track for a position at Harvard Law School and she is a working-class creative studying music.

But when their worlds collide, their attraction to one another is inescapable, they survive family disownment and financial struggles together all in the name of love before their journey is tragically brought to an end far too soon.

It is the story which gave us the classic line “love means never having to say you are sorry” and showed us a prime example of what true love means. Segal’s Love Story continues to make and break hearts 50 years after publication and is the perfect next read for people looking for more novels like Outlander.

During these uncertain times when we would all like to be anywhere but here, these transportive books like Outlander are the perfect escape. Guaranteed to take your mind off things by carrying you far, far away to other times and other worlds they are great accompaniments to this period of social distancing.

Are you looking for novels like Outlander? Do you have any recommendations that didn’t make the list? Let us know in the comments! 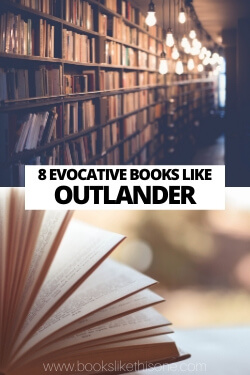