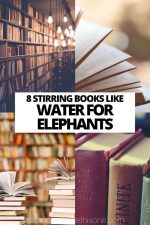 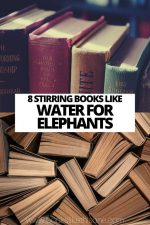 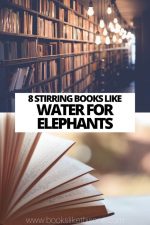 The only hard thing about books like Water for Elephants is deciding which one to read next! This is because there are plenty of glorious aspects to pursue in Sara Gruen’s richly narrated and emotive novel.

There’s heartbreak when protagonist Jacob Jankowski becomes an orphan forcing him into a spiral of depression until he runs away to join the circus. Then there’s forbidden love as Jacob falls for Marlena, the married star performer of the shows equestrian act, drama mainly coming from Marlena’s unpredictable and violent animal trainer husband who becomes jealous of her and Jacob’s bond.

There are lots of animals, as Jacob cares for the different creatures that feature in the circus and becomes particularly taken with an elephant called Rosie. Struggle, as Water for Elephants is set during the Great Depression and all of this is tied up with a ribbon of nostalgia as Jacob recalls these past events from a nursing home in the present day.

The novels that feature on this list of books like Water for Elephants all explore similar themes and are guaranteed to make you laugh, make you cry, break your heart and make you fall in love simultaneously, enjoy.

Memoirs of a Geisha, by Arthur Golden

Arthur Golden’s debut novel Memoirs of a Geisha has become quite the literary sensation since publication in 1997, later being turned into an award-winning film directed by Steven Spielberg.

Told in the first person, the novel follows the young Chiyo Sakamoto who at nine years old is sold, along with her elder sister, to the entertainment districts of Kyoto, Japan where she starts her training to become a geisha. A training which at first involves cleaning the boarding house and other menial tasks until she is deemed “worthy” enough to become a geisha properly.

Chiyo reports on her attempts to escape, reunite with her sister and mission to make the Chairman her ‘danna’ or patron. Set over the course of the Second World War, Golden provides readers with a moving portrayal of one of Japan’s most ancient traditions, the exquisite and lyric Memoirs of a Geisha is sure to captivate any fan of books like Water for Elephants.

The Notebook, by Nicholas Sparks

Nicholas Sparks has created a love story in The Notebook, his 1996 novel, which defined love for a generation and also broke their hearts too.

Set just after the Second World War, Noah Calhoun returns to North Carolina and begins restoring an old plantation house, a task he said he’d always complete. Here he is constantly haunted by the summer he spent there fourteen years earlier and by Allie, the girl he fell hopelessly in love with.

Noah is happy just holding on to his fond memories; that is until Allie unexpectedly returns to town one day looking for him. As their relationship reignites after all those years apart, we slowly become aware that their story, their love isn’t quite as easy and straightforward as it would seem, though it is no less powerful.

Sparks weaves a moving narrative reminiscent of Jacob recalling his youth, so anyone looking for more books similar to Water for Elephants will certainly enjoy The Notebook too.

Have you already read this romantic novel? Check out our list of more books like The Notebook!

One of my favourites is next on this list of books like Water for Elephants, it is the razzle-dazzle of the roaring twenties in F. Scott Fitzgerald’s enduring novella, The Great Gatsby.

Told from the perspective of Nick Carraway, a Yale alumnus who has just moved to the town of West Egg in Long Island and become the new neighbour to the wealthy estate owned by a mysterious millionaire, the enigmatic and charming Jay Gatsby. Gatsby holds these tremendous, extravagant parties at his house all in the vein of luring his all-time love, the beautiful Daisy Buchanan, to them.

Nick is a distant relative of Daisy and he and Gatsby become friends, torn between his allegiance to Tom, Daisy’s adulterous husband and his friendship with Gatsby, Nick eventually helps Daisy and Gatsby reunite, not knowing just what fate has in store for the two star-crossed lovers.

Exploring themes of idealism, decadence and resisting change and, with a madness and jealousy seen in Tom echoing Marlena’s husband, The Great Gatsby is still a stirring read even 96 years after publication.

Know and love this 20th-century classic already? Check out our list of books like The Great Gatsby!

Ian McEwan has become quite the master of English prose and Atonement, his novel like Water for Elephants, does not deviate from his usual subliminal authorial skill. Forbidden love and childhood naivety are all at the novel’s core, set against the chaotic backdrop of World War II.

During a very hot summer in 1935, a secret flirtation between Cecilia Tallis, an upper class girl, and Robbie Turner, the son of a servant, is witnessed by Cecilia’s younger sister, Briony. A secret which Briony twists and turns with her childlike imagination misunderstands and unwittingly uses to protect her sister from Robbie’s misinterpreted intentions.

Not fully grasping the seriousness of what she reveals or the repercussions which will change the lives of her family for good, Briony spends the rest of her life trying to atone for her actions on that one fateful day.

Atonement is incredibly emotive, it is a story of love, guilt, forgiveness, sacrifice and punishment, a deeply affecting read, regarded as one of McEwan’s best works.

If you like Water for Elephants for all the fun at the circus, then Erin Morgenstern’s novel The Night Circus is sure to fulfil any desire you have to run away with one.

No one knows when Le Cirque des Rêves is coming to town. It seems to just appear opening its black and white striped tented doors for one night and one night only to shock and amaze and mystify with daring acts and amusements.

At the novel’s heart is the relationship between Celia and Marco who are two young magicians trained since childhood the art of the sleight of hand, they are also in constant competition with one another. As well as this growing rivalry between the two is also a blossoming love, the kind that makes time seem to stop at the merest touch, but when one’s fate has already been drawn out, is love powerful enough to alter the course?

Find out in Morgenstern’s poetic novel The Night Circus which is sure to cast a spell on anyone who reads it.

Girl with a Pearl Earring, by Tracy Chevalier

Tracy Chevalier carries readers to 17th-Century Holland where we find Griet, a servant girl memorialised by the grand artist Johannes Vermeer in his painting, and title of our next novel, Girl with a Pearl Earring.

Fictional of course but drawing inspiration from the painting and Vermeer himself, Chevalier tells the backstory of the girl in the painting how at sixteen she was sent to work as a maid in Vermeer’s household after her tile-painting father is blinded in an accident.

Griet is drawn to Vermeer’s work and appears to be a steadying influence on his unpredictable, artistic temperament and so arrangements are made for her to devote more time to assisting him which ruffles a few feathers, mainly Cornelia his youngest daughter and Catherina, Vermeer’s wife.

A touching portrayal of art and beauty, love and duty, if you like books like Water for Elephants for their ability to transport you so easily to another place in time then you will enjoy Girl with a Pearl Earring too.

As with a lot of novels like Water for Elephants, they are at times highly emotive and our next book is no exception.

Sarah’s Key by Tatiana De Rosnay takes us back to the Paris of 1942, where a ten-year-old Sarah is arrested along with her parents in the Vel’ d’Hiv round-up of Jews by the Nazis.

Just before their house is stormed, she locks her younger brother Michel in a wardrobe where they used to play hide and seek and keeps the key believing she will be back to rescue him shortly, and so the narrative follows Sarah’s heartbreaking journey back to Michel.

Through the eyes of an American journalist living in Paris and investigating that fateful day, we relive Sarah’s ordeal at the hands of the Nazis, her separation from her parents, the different camps where she was held captive, the kindness (and cruelty) of strangers all while worrying about her brother.

Though a little unsettling to read at times Sarah’s Key explores the historical ignorance surrounding such an atrocity.

Hotel on the Corner of Bitter and Sweet, by Jamie Ford

On this list of books like Water for Elephants we have witnessed a lot of forbidden love and familial struggle against a backdrop of several wars and our next novel by Jamie Ford takes this familial struggle further by exploring it in a national context as well.

Hotel on the Corner of Bitter and Sweet, Ford’s 2009 novel, opens in 1986 where Chinese American Henry Lee unwittingly joins a crowd outside a boarded-up hotel. The reason for this crowd is the hotel’s new owner has discovered items belonging to Japanese families that were imprisoned in camps during the Second World War.

The sight of a Japanese parasol catapults Henry back to the 1940’s to his childhood stirring memories of a dear friendship he had with a Japanese American girl called Keiko Okabe, their friendship sadly ended when Keiko and her family were transferred to these internment camps.

Henry begins scouring the basement of the hotel for Keiko’s belongings while thinking about his life since they last saw each other, the sacrifices he made for his country and his family. Hotel on the Corner of Bitter and Sweet is a thought-provoking novel highlighting another stain on America’s past.

As you can see, this list boasts some absolutely fantastic novels which will transport you to another time and place with a host of captivating characters whose lives and relationships you become so invested in, rooting for them even though it doesn’t always work out as you’d hope. Good luck choosing your next book like Water for Elephants to read because they are all truly marvellous!

Are you looking for more books like Water for Elephants? Have any recommendations that didn’t make the list? Let us know in the comments! 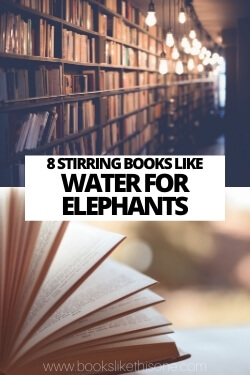