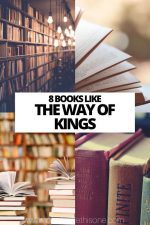 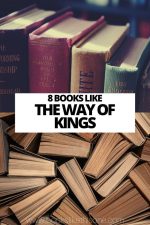 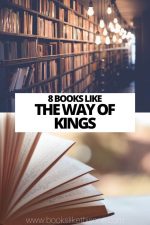 Are you searching for more books like The Way of Kings?

Anyone who has read any of Brandon Sanderson’s novels knows he has built his career within the genre of epic fantasy. The Way of Kings is now 10 years old and was the first in The Stormlight Archive. The mere mention of Shardblades, Voidbringers and Radiants still brings a glint to my eye.

The Wheel of Time series is often held up as one of the benchmarks of epic fantasy novels. The Way of Kings surpasses that mark by a few thousand miles. If you love stories that take place in minutely crafted fantasy worlds that can literally take your breath away, you might be interested in the following books that are very much like The Way of Kings.

The King Must Die, by Mary Renault

The King Must Die is probably not the first book like The Way of Kings a reader would think of, but you would be daft not to read this. Epic fantasy draws from human history and myth. In myth, we all know Theseus as the heroic killer of the Minotaur hiding within a dark labyrinth on the island of Crete.

In reality, we don’t know much, but Renault uses her historical knowledge combined with archaeological findings at the palace of Knossos (the oldest sign of modern civilisation in the western world – look up the Minoan empire if you want to know more) to create a tale of Theseus that feels more real and fantastical than the myth.

Here, Theseus is a young man. He is armed with a gung-ho attitude and enthusiastically accepts any challenges the Gods set him. The story follows his adventures from Troizen all the way to Crete, where he becomes king of the victims. The Gods and monsters are sprinkled amongst the very real-world tale of a man trying to find his way in life.

Both memorable and page-turning, you have to keep reminding yourself that technically you are reading a semi-historical novel, rather than an epic fantasy. Everything from the rich landscape of Crete to the blood and sweat as Theseus jumps bulls feels epically fantastical. That is how good this book is.

Love reading about Greek Mythology? Check out our list of books like Circe and The Song of Achilles!

Books like The Way of Kings offer the reader a rich fantasy world filled with demons and monsters terrorising the often-human protagonists. The Painted Man (published as The Warded Man in North America), follows a similar but different pattern.

Our humble-at-first-hero, Arlen, might be another Luke Skywalker-esque trope, but he is more inventive and down-to-earth than the famous Jedi knight. Yet Arlen is not alone, and the book follows him, Leesha and Rojer, three people who do not find each other until they are adults.

Like The Stormlight Archive series, the icing on the tale lies within the world-building Brett does. In this world, humans have to remain within magically warded houses or structures at night. If they’re caught outside after sunset, then the supernatural Corelings will get them.

I really enjoyed this book and the combination of strong characters, interesting magic system and terrifying demons hooked me from the start. This is well worth a read if you’re a fan of The Way of Kings.

The Spirit Thief, by Rachel Aaron

For a book like The Way of Kings to work, it must do the following as a bare minimum:

1.  Present the reader with a believable protagonist

2. Make that protagonist want something badly

3.  Make it almost impossible for them to get it

4.  Make me believe in the world and any magic contained within that world

The Spirit Thief ticks all four criteria and then some. The character of Eli Monpress is not only believable, he’s fun, he’s a thief, and… he’s a wizard. The rogue nature of Monpress contributes greatly to this novel’s success. Deciding to kidnap a king in order to increase the bounty on his head just so he can institute an even grander plan is both hilarious and epic.

The rules of the world are set in such a way that you believe them without question. Wizards work with the spirits of the world to either keep the peace or start a fight and you believe it is really happening.

Whilst The Spirit Thief has been accused of being ‘too low-key’ by some epic fantasy fans, the light tone of the story works. Besides, epic fantasy can be too melodramatic for its own good.

The Name of the Wind (The Kingkiller Chronicle 1), by Patrick Rothfuss

From heist to a coming-of-age story, The Name of the Wind is an excellent title to read if you’re a fan of The Stormlight Archive. I have spoken about it before, but this book more than earns its place on this list. First-person narratives can limit a reader’s perspective, but The Name of the Wind handles the challenge with style and grace.

Kvothe is the most notorious wizard the world has ever seen, and now he is sharing his tale with us. From being a child in a travelling theatre to orphan, through to his daringly successful attempt to enter the best school of magic, you will feel like you’re in Kvothe’s shoes.

Kvothe’s musings veer from sorrowful to philosophical to sociopathic as he tells his story to a chronicler who’s come looking for the legend. Both epic and intimate, The Name of the Wind might not please all fantasy fans, but as a deep character study, this novel wins.

Furies of Calderon, by Jim Butcher

Books like The Way of Kings often set one race or group against another in a brutal, bloody battle for victory. Known more for his Harry Dresden urban fantasy series, Butcher’s Codex Alera boasts striking similarities with The Stormlight Archive.

We have a high fantasy world complete with coming-of-age character undertaking the hero’s journey. We also have a world filled with warring races and empires, with the largest based on the Roman Empire.

Yet we also have an almost computer-game-style magic and battle system in the way Tavi is trying to construct his bond with the world’s magical ‘furies’. The magic system is based on a person being able to summon the elementals of earth, air, fire, water and metal.

Tavi cannot seem to be able to work with any of them and it is this plucky character we end up rooting for. Throw spies and political intrigue into the mix, and Furies of Calderon ends up being a nice mix of high fantasy and role-playing adventure.

The Eye of the World (The Wheel of Time 1), by Robert Jordan

You cannot talk about books like The Way of Kings without mentioning Jordan’s epic Wheel of Time series. The fact that Sanderson completed the saga following Jordan’s premature death, shows how closely related their work is.

Like Sanderson with The Stormlight Archive, Jordan revelled in detail. The Eye of the World is so full of detail in the world that Jordan built, you just go along for the ride as Rand, Mat and Perrin set out on their journey. The Trollocs (kind of like werewolves) are just fairy tales to these barely-young men, until creatures that look and sound an awful lot like the fairy tale beasts of old attack their village.

The Eye of the World is often compared to Lord of the Rings and it is hard to deny that comparison. Yet Jordan goes further than just a simple obsession with a magical ring. In his novel, one of the principle leads might actually be the bad guy himself.

Sharp-eyed (i.e. insufferable clever clogs) readers love to say it is easy to guess which of the lead characters is the ‘Dark One’ early on in the book. My advice is to make up your own mind and have a go at reading this for yourself.

Do you already know and love this epic fantasy series? Check out or list of books like The Wheel of Time!

The Lens of the World, by R.A. MacAvoy

This is another finely crafted high fantasy in the vein of The Stormlight Archive. Following the boy Nazhuret, an outcast orphan who begins as a minor ward at a military school. You can probably guess what might happen next, but that does not make Nazhuret’s journey any less interesting.

The fantasy setting is deep without being too flashy. There are hints of the supernatural but they are not overused and remain believable within the world that MacAvoy has created. What sets this apart from other books like The Way of Kings is in the style it is written.

The Lens of the World is presented as a series of letters from Nazhuret as he tells his story to a friend. Whilst this is not a new way of telling a story (see Bram Stoker’s Dracula) it does make this novel shine and move along well.

Imagine not being able to tell the difference between pleasure and pain. That is the central concept driving Carey’s sophisticated fantasy. Phèdre nó Delaunay was pricked by Kushiel’s Dart dooming her to forever experience pain and pleasure as one. Sold into servitude she is bought by a nobleman who recognises what she is.

Phèdre soon learns everything there is to know about court intrigue, assassination, love and betrayal. Kushiel’s Dart might not be for everyone, but it bears similarities to The Way of Kings in the high fantasy setting (technically a parallel earth), and interesting magic systems employed.

There is a lot of sex and questions of morality to contend with, which I think is Carey’s point. Because the keeper of Hell cursed/blessed Phèdre, her ability to perceive no difference between pleasure and pain leads to some interesting scenes.

I found it enlightening that some readers of high fantasy have baulked at the sex scenes in Kushiel’s Dart, but are fine with the intense and often graphic violence depicted in books similar to The Stormlight Archive. I would recommend giving this a read and making up your own mind.

There are many books like The Way of Kings to keep epic fantasy fans entertained. Some are light-hearted, others are dark and more sombre in setting. All of them have something to offer and if you’ve enjoyed The Stormlight Archive, I would not hesitate to recommend any of the above titles. Of course, this is just one opinion.

Are you looking for more books like The Stormlight Archive? Have any recommendations that didn’t make the list? Let us know in the comments! 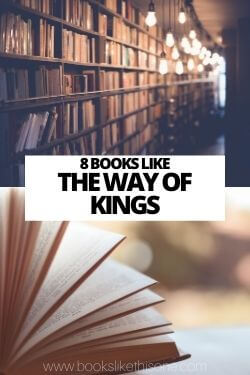