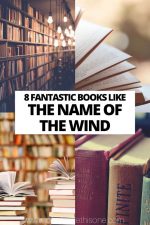 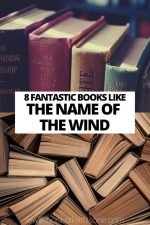 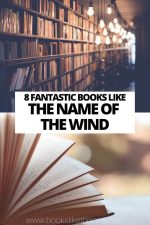 Patrick Rothfuss’ 2007 heroic fantasy novel The Name of the Wind is the first instalment in The Kingkiller Chronicle (of which there are currently two published books). Since its release, it has received much critical acclaim and has developed a following amongst fantasy fans throughout the world. However, the author is also slower at releasing books than George RR Martin, meaning that fans of The Kingkiller Chronicle are perpetually looking for other things to read to while enduring the long wait for the next instalment of the series. If you find yourself in this boat and are looking for more books like The Name of the Wind, have a browse through these titles which are sure to satisfy your need for a high-fantasy epic.

The Lies of Locke Lamora, by Scott Lynch

Scott Lynch’s 2006 novel The Lies of Locke Lamora is the first instalment of a planned seven novels (three of which have been released) in the Gentleman Bastards series. The novel sets up the series that follows the Gentleman Bastards, a group of con artists living in a criminal underworld in the fictional city of Camorr, which is based on a medieval Venice, Italy.

The novel follows various members of the Gentleman Bastards and, in particular, the titular character Locke Lamora, and how they got to where they are in the book. It also intersperses chapters with a history of the city of Camorr, which really helps edge along the great world-building in this novel.

Though The Lies of Locke Lamora is yet another instalment of an as yet unfinished series, it is still a great option if you’re on the hunt for books like The Name of the Wind.

A Darker Shade of Magic, by VE Schwab

Published in 2015, VE Schwab’s A Darker Shade of Magic is the first instalment in the Shades of Magic trilogy and is an excellent choice if you’re looking for series similar to The Name of the Wind — especially since all of the books in this series have been published!

A Darker Shade of Magic follows Kell, who is the last of what is known as an Antari. Antari are a kind of magician that have the capacity to travel between all the realms of London that exist in the world of this series, including Red, Grey, White, and Black London. Kell acts as a smuggler, ferrying people to the different Londons for a fee. When one such journey goes awry, Kell must flee and that is what the novel and series are about.

If you’re looking for an imaginative and compelling fantasy series to read to bide your time while waiting for the next Kingkiller novel to be released, then VE Schwab’s A Darker Shade of Magic is a good option for you.

If you’re looking for a fantastic fantasy novel like The Name of the Wind that doesn’t require committing to another massive series, then Naomi Novik’s 2018 novel Spinning Silver is an excellent choice.

A rare female-led fantasy novel, Spinning Silver is something of a retelling of the classic fairytale “Rumplestiltskin.” The novel, told from various different perspectives, mainly follows Miryam — who is a young Jewish girl and the daughter of her’s small village’s moneylender. Because her father is bad at collecting his debts, Miryam takes over the family business, angering the villagers and calling attention to herself to the supernatural creatures that are bringing perpetual winter to her town.

The novel was nominated for the prestigious Hugo Award in 2019 and has received much critical acclaim, especially in regards to how it deals with themes like anti-Semitism and dealing with traditional gender roles. Therefore, if you’re looking for a wonderful fantasy novel similar to The Name of the Wind, then Naomi Novik’s Spinning Silver is a great choice for you!

Susanna Clarke’s massive 2004 fantasy novel Jonathan Strange & Mr Norrell is a great choice for readers who are looking for a stand-alone book like The Name of the Wind. This book, set in England and following an alternative history during the Napoleonic wars, is a unique and compelling book that is perfect for fans of historical fiction and fantasy alike.

The novel follows the premise where the North-South divide of England is reversed and the North of England is seen as progressive, rich, and magical where the South is more rational and industrial. It is set in a world where magic was once a thing that people possessed and it has returned to two people, Jonathan Strange and Gilbert Norrell.

The novel, while certainly very fantastic in elements, also examines things like the nature of “Englishness,” historical otherness, and the concept of reason vs madness while still using a writing style comparable to that of Austen or Dickens.

If you’re a fantasy fan and are looking for books like The Kingkiller Chronicle, then make sure to add Jonathan Strange & Mr Norrell to your list.

No list of fantasy novels like The Name of the Wind would be complete without including a Neil Gaiman book, and his 1996 novel, Neverwhere is an excellent choice.

The novel follows Richard Mayhew, a seemingly normal London man who, through a series of events, is transported to an alternative London that is completely based in the London Underground, referred to as London Below. Upon finding an injured girl from the alternative London in London Above (normal London), Richard and a band of other characters are tasked with assisting the girl from fleeing assassins who killed her family.

Like all Gaiman novels, the world in which Neverwhere is set is incredibly well painted and the book is almost instantly compelling. It is also just a fantastic choice if you’re looking for another great fantasy novel to add to your reading list.

A Wizard of Earthsea, by Ursula K Le Guin

Published in 1968, Ursula K Le Guin’s A Wizard of Earthsea is the oldest novel on this list of books like The Name of the Wind, however, it is still a great choice for any fantasy fan looking for another great series to embark upon (this one is finished, too!)

Ged learns and grows and overcomes hardships throughout the novel and series, which also draws heavily upon established Norse, Anglo-Saxon and Native American myth. Although originally published for children, The Wizard of Earthsea is a popular choice for readers of all ages.

The Colour of Magic, by Terry Pratchett

Published in 1983 by the late Terry Pratchett, The Colour of Magic is the first instalment in the comic fantasy Discworld series. It is also a great choice for those looking for books like The Name of the Wind and The Kingkiller Chronicle.

A much more lighthearted novel (and series) than any of the others on this list, Terry Pratchett describes wanting his Discworld series to do for fantasy “what Blazing Saddles did for westerns.” As the first book in the series, The Colour of Magic sets the scene of the Discworld universe, which is a flat, disc-shaped planet that is carried on the back of four giant elephants that are standing on top of a giant sea turtle.

The novel follows Rincewind, a wizard who is charged with the task of guiding a rich visiting insurance clerk, Twoflower, through his native city. Things then go awry and the novel follows both Rincewind and Twoflower through their antics throughout the Discworld.

Though more comic in nature than any of the other novels on this list, The Colour of Magic is a great choice for any fantasy fan.

A Game of Thrones, by George RR Martin

No list of epic fantasy series would be complete without including the first instalment of George RR Martin’s epic A Song of Ice and Fire series, A Game of Thrones. And, similarly as frustrating, the series is also unfinished and, like The Kingkiller Chronicle, it is unclear when the next novel in the series will be released.

Unless you’ve been living under a rock for the past decade, you likely have at least some idea what A Game of Thrones is about, due to the incredibly popular HBO series of the same name. The first book of the series, published in 1996, sets the scene for the drama to come in the world of Westeros and it is an incredibly compelling and interesting high fantasy series to read, especially if you liked The Name of the Wind.

If you’re sad about how the show ended, are fascinated by the politics and drama that this famous series is known for, or are just interested to see how George RR Martin originally envisioned your favourite characters like Tyrion, Arya, and Ned Stark, then A Game of Thrones is a great choice for you.

Finding books like The Name of the Wind while you anxiously await the release of the next instalment in The Kingkiller Chronicle series doesn’t have to be a difficult task. There are numerous series and stand-alone novels that are sure to scratch your fantasy itch while you wait!

Are you looking for books like The Name of the Wind? Do you have any suggestions that didn’t make the list? Let us know in the comments! 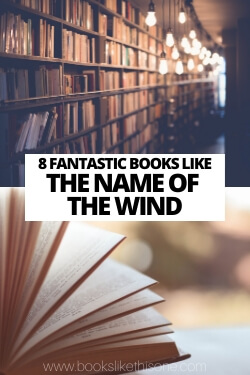