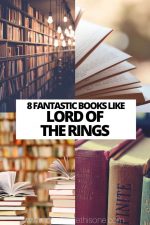 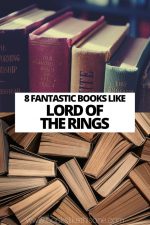 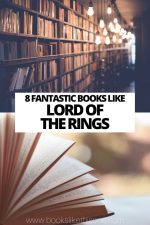 Searching for more books like Lord of the Rings?

In every corner of the world someone will have heard of or read Lord of the Rings. Considered the father of epic fantasy, J.R.R. Tolkien introduced us to the lands of Middle Earth and all the races – good and evil – that dwell within. Gandalf the Grey (later White), Frodo Baggins (humble Hobbit-turned-ring-bearer), Aragorn (Son of Arathorn and heir to the empty throne of Gondor), Legolas (elf and friend to Aragorn), Gimlet the dwarf and so many more.

The books have been studied, copied, parodied and dramatized (most famously by Peter Jackson). The epic quest to destroy the “one ring to rule them all” has captured the imagination of billions since 1954. However, if you’ve read the trilogy more times than Gollum’s hissed “My preciousss!”, there are many books like Lord of the Rings available.

The Naming, by Alison Croggon

First published in Australia back in 2002, The Naming is another book like Lord of the Rings that boasts an epic scale. The first in the Pellinor quartet and originally published as The Gift, the story begins with Maerad, a slave who is discovered to have the gift to control and command nature itself.

Maerad is discovered by Cadvan (a fellow mystic) who helps her escape slavery. As the story progresses, you soon realise that Maerad is not just any old mystic and so unfolds an epic fantasy that easily rivals books like Lord of the Rings in terms of size and scale.

Maerad is a worthy protagonist but unlike Frodo, actually has some power and a much stronger will than the titular hobbit ever did. This makes the books eminently more enjoyable to read. Also, it is refreshing to read an epic fantasy where the survival or doom of a world rests on the shoulders of a female, rather than a male protagonist.

If you like epic fantasy I strongly recommend the Pellinor quartet.

Most books like Lord of the Rings have a habit of introducing us to a protagonist that comes from a humble background. Song of Blood & Stone doesn’t break with this tradition and places us in the shoes of Jasminda, a farmer who wants nothing more than to live quietly and away from judgement.

You soon discover that Jasminda is an “Earthsinger” someone who possesses ancient magic that frightens the local townsfolk. Yet it is her “Earthsong” power that might be the only thing capable of preventing The True Father into crossing the Mantle (a magical veil between Jasminda’s world and another) and taking over.

What makes Song of Blood & Stone interesting is its head-on attitude towards racism and sexual abuse. This novel is at turns both brutal and tender depending at which point of the story you’re at. However, the violence and racism is not the driving thrust beneath the narrative; it’s actually romance.

I’m not a fan of romance novels, but it is hard not to like the development between Jasminda and Jack as the story moves along. The epic nature of the tale works well, as do its themes of inclusion and diversity. Worth a read.

Sick of watching TV while self isolating? - Get a 30-Day Free Trial of Audible to try out audio books or try out Kindle Unlimited so you can download unlimited ebooks!

The Hobbit, by J.R.R. Tolkien

Books like Lord of the Rings are many and plentiful. Where better to start looking for similar titles than with the author himself? The Hobbit was published in 1937 and follows Frodo’s Uncle Bilbo. Gandalf turns up on Bilbo’s doorstep and convinces Bilbo to join 13 dwarves on a quest to win a share of treasure guarded by the terrible dragon Smaug.

Written for children, The Hobbit is a charming and gentle hand-held stroll into the world of Middle-Earth. Each chapter is episodic with a self-contained micro-story in each. This makes the book easy to read and even more fun when you start making connections to events in the later Lord of the Rings trilogy.

A particular highlight is “Riddles in the dark” where we first meet Gollum and Bilbo acquires a ‘magic ring’ that becomes somewhat important in Tolkien’s later epic. The recent films (directed again by Peter Jackson) were not as popular as his earlier Rings trilogy adaptations, perhaps because they took huge liberties (Legolas was never a character until The Fellowship of the Ring) with a story that is no longer than 300 pages.

The films divided fans of the book but did draw more attention to the tale of the reluctant Bilbo as he accompanies the dwarves on their quest. The Hobbit is a must-read if you’re a fan of Lord of the Rings.

The Sword of Shannara, by Terry Brooks

There are books like Lord of the Rings that are criticised for being too derivative or similar. The Sword of Shannara suffers from this comparison mainly because the main character (Shea) is plucked by a Gandalf-like figure (Allanon) from his village in order to seek out a mythical object (the sword) capable of stopping the evil Warlock Lord threatening the Four Lands.

When you read the first several chapters, it is hard to deny that you’re basically reading Lord of the Rings 2.0. However, once you get past the characters being hunted by Wraith-like beings, the story does begin to deviate from Tolkien’s epic.

Shea and Allanon are both interesting enough to hold your attention, (Allanon’s fate is especially thought-provoking and significant to the other 2 books in this first trilogy) and the quest to destroy the Warlock Lord is nowhere near as drawn out as the quest to destroy the one ring and its master, Sauron. If you like Lord of the Rings you’d be a fool not to try The Sword of Shannara.

Taking place in the land of Seahold on Pern, Menolly is a gifted young musician and has been helping the old ‘Harper’ Petiron, as he educates the Hold’s children. When Petiron dies, Menolly’s parents forbid her from revealing that she has been teaching the children to the new Harper or anyone else.

In Seahold it is ‘not a woman’s place’ to teach, compose or play music.

However, neither Menolly nor her parents know that Petiron sent several of Menolly’s compositions to Masterharper Robinton of Harper Hall. And Robinton is eager to learn who this new composer is.

Dragonsong is further proof that McCaffrey was able to create such evocative worlds in her mind and populate them with memorable characters. Menolly’s frustration at not being permitted to compose or play music holds strong parallels with many of the struggles women today still face in many workplaces.

We think we have come so far as a species, yet Menolly’s tale will chime a chord with any woman who has been passed over for promotion or labelled ‘aggressive’ when she has merely been assertive. Dragonsong excels at highlighting a real-world problem whilst allowing the reader to imagine the ‘What if?’ possibilities.

Despite the end resorting to an old gender trope that is outdated, Dragonsong is still a sweeping read. Plus it’s hard not to find Menolly’s fire-lizards unbelievably cool.

A Wizard of Earthsea, by Ursula K. Le Guin

How many coming of age stories have you read? Much like Frodo in Lord of the Rings, Duny is a humble boy living in a sleepy community before he is whisked away to discover his true calling as well as his true name – Ged. Ged’s Aunt sees the natural magical ability her nephew has and begins teaching him whilst they still live on the small island of Gont.

Ged’s adventure truly begins when the powerful mage Ogion takes him as an apprentice at mage school. It is here that Ged begins to understand the nature of magic as well as the responsibility he has as a mage to try and maintain balance wherever possible. To say more would be to spoil the plot of the book.

Ged is a prickly protagonist and rubs a lot of his schoolmates up the wrong way, yet this makes his inevitable fall from grace more poignant. His cocksure arrogance giving way to the fragile boy beneath makes him more relatable as a character.

A Wizard of Earthsea was published all the way back in 1968 and Ged appears in many more of Le Guin’s Earthsea novels. Her writing is ethereal in places, occasionally making me feel I was in a dreamlike state, conjuring up magical worlds and people in my mind.

The Chronicles of Thomas Covenant: The Unbeliever, by Stephen R. Donaldson

Books like Lord of the Rings don’t get more epic than this 10-book high fantasy series. Thomas Covenant himself is a far cry from the good guy characters of Middle Earth; embittered, cynical and shunned by society because of his leprosy.

The first trilogy consists of Lord Foul’s Bane, The Illearth War and The Power that Preserves. Thomas himself comes from our world but is fated to become the heroic saviour of “the Land”, an alternate world. The bad guy is Lord Foul, a Satan-like character desperate to escape the bonds of the physical universe so he can avenge himself upon his arch-enemy, “the Creator” or God if you prefer. It is difficult to convey the complexity of the worlds Donaldson creates without writing a ten-page essay as an introduction.

Needless to say, The Chronicles of Thomas Covenant make Lord of the Rings seem like a children’s story in comparison. If you’re looking for high fantasy epic at its most epic, you simply have to read the Thomas Covenant books.

The Killing Moon by N.K. Jemisin

Epic tales and magic are nothing without a rich, diverse list of characters to populate the world where it all takes place. The Killing Moon is the first of the Dreamblood series, but despite the epic scale, feels much more personal to read than Lord of the Rings ever did. Gujaareh is an ancient city that cites ‘peace’ as its only law.

The Gatherers are priests of the dream-goddess and they keep the peace by harvesting the magic of the sleeping mind, using it to heal, soothe and even kill people judged ‘corrupt’. Ehiru is a gatherer and is forced to question everything he knows when someone or something begins murdering innocent dreamers in the goddess’s name.

Jemisin is now better known as the triple-Hugo-winning author of the Broken Earth series (The Fifth Season is definitely worth checking out), but I found this tale of magic and dark entities easier to read. The world she creates would be nothing without the characters within it, and they are eminently readable.

Ehiru is inherently naïve but becomes so engaging when he is forced to question his faith. It’s a bit like that moment when as a child, you discover Santa Claus isn’t real. The disappointment and loss that occurs is something that is hard to get over. If you’re looking for titles similar to Lord of the Rings, then The Killing Moon should be near the top of your list.

As you can see there are many books like Lord of the Rings out there. The above are just a few of our top selections, but there are hundreds more waiting to be read. Is our list “Preciousss!” enough for you? We’d love to hear your views.

Are you searching for more fantasy novels like Lord of the Rings? Have any recommendations that didn’t make the list? Let us know in the comments!