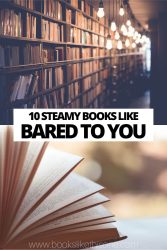 Books like The Crossfire Series will have you blushing and make your heart flutter out of control. In the series, we get to know Eva and Gideon who immediately have a connection when they first meet.

Gideon is a billionaire, owner of Crossfire and most eligible bachelor, however, he doesn’t have any plans on settling down, until he meets Eva and starts considering the possibility.

Along with passion, Gideon and Eva share childhood trauma, which they have to work on healing to be better for themselves and each other.

If you couldn’t get enough of Eva and Gideon’s steamy but complicated love story, continue reading for a list of books you’ll love!

Although very innocent, Ana is intrigued by Mr Grey and can’t say “no” to his proposal to be his submissive. At first, Ana will do whatever she can just to be close to Christian and spend time with him but she also feels in over her head.

While Christin demands full control, he has to learn to give more than he takes and to open up in order to keep Ana.

The Beautiful series starts with Beautiful Bastard, which follows two headstrong people who don’t get along but have to work together.

Chloe is Bennett’s intern and while she’s great at her job, he never seems to appreciate her work. Until one late night in the office when things get heated and clothes come off. After they cross that line they don’t know how to stop or if they even want to.

Books similar to The Crossfire Series, like the Beautiful series, support the empowerment and freedom of sexuality. The books encourage women to be true to themselves and not afraid of asking for what they want.

Most of the books in the series centre around a different couple and some even give readers a follow-up to each naughty duo. It’s a little gift that keeps on giving and you won’t be able to help but fall for each story.

As soon as Caroline moves into her new apartment in San Francisco, she discovers that her next-door neighbour is a Wallbanger.

Simon gets this nickname from the way he bangs the wall when he gets intimate with his different lady friends he rotates each night.

The more frustrating the banging becomes the more intrigued Caroline becomes. The tension between them increases until they finally meet and a friendship develops.

That friendship quickly turns romantic and Caroline can finally see what all the banging was about for herself.

Risking it All, by Tessa Bailey

The first book in the Crossing The Line series, Risking it All, focuses on Seraphia who is an NYPD detective going deep undercover to find out who killed her brother.

Sera puts her own life in danger by getting involved with a street gang but she believes that’s a small price for her to pay as long as she can find out the truth.

In her investigation, she gets close to one of the leaders of a crime gang. Little does she know he was blackmailed by someone in the NYPD to watch her back and keep an eye on her.

In the process of avenging her brother’s death and staying alive, Sera has to also fight her growing feelings for the crime prince.

Rush, similar to books like Bared to You, explores the character’s fantasies and desires with a promised love story.

In the first book of the Breathless series, we learn about Gabe’s wildest fantasies with his best friend’s little sister Mia, who was always forbidden to him. To his surprise, Mia wanted him just as bad all along.

While Gabe has created strict boundaries and rules to protect his heart, he knows Mia is different from all his former partners. Without realising, he starts to bend the rules just to be closer to her.

As the two give in to their desires, their feelings for each other start to deepen. But they’ll have to figure out if they can be more and whether it’s time to tell Mia’s brother or not.

The Deal is part of the Off-Campus series, which starts off with Hannah and Garrett. The rest of the book focuses on the top hockey players of Briar University and their love interests.

Hannah makes a deal with the star hockey player, Garrett, to tutor him and in return, he will help her learn to be more confident around her crush and about the topic of sex.

Along the way, Hannah realises that she is very attracted to Garrett and they start to put the lessons into practice.

Hannah will be left confused on whether she wants to continue exploring things with Garrett or if she wants to pursue something with her original crush.

Imagine falling in love for the first time. Every feeling and emotion is so intense. You can’t even picture your life without the other person.

The After series, similar to books like the Crossfire Series, shows the beautiful and dysfunctional parts of love between people with trauma.

Even in the worst moments of their complicated relationship, you can’t help but hope it works out between Tessa and Hardin or that they at least become better people in the end.

In the series, we get to go along for the ride from the moment the two meet, to their fights, the moment they realise they love each other and every time they mess up.

Following their rollercoaster journey together and apart, there won’t be a dull moment and it may give you a better understanding of a different kind of love.

A Lie for a Lie, by Helena Hunting

In A Lie for Lie, RJ is the team captain of his NHL team, a job he takes seriously which leaves him to take care of everyone else but himself. So when he is forced to take a well-deserved vacation he is pleasantly surprised when he meets Lainey and she makes him see there’s more to life than just hockey.

The two spend the full month in RJ’s family cabin, having the most perfect time in their little bubble. That is until they have to return to reality and end up not having any way to contact each other.

When years pass and they run into each other, they realise they missed out on more than they expected. Now that they might have a second chance, they will have to figure out if they want, or can, get back what they first found in Alaska.

Something Borrowed, by Eve Dangerfield

When Elle, from Something Borrowed, is guilted into attending her best friend’s wedding in Bali, her main goals are to drink as much as possible and stay away from Jackson, the guy she liked once but now can’t stand.

However, Jackson has other plans. He is more attracted to Elle than ever and even suggests a deal for a truce for the rest of the trip. If he can’t change Elle’s mind about him then they will continue to avoid each other forever but if he succeeds then they could potentially be very happy together.

Surprisingly so, Elle is similar to Gideon from the Crossfire Series in the way that they are confident and unapologetic with their desires. Similarly, Jackson is like Eva by being open to this new world and supporting their partners to be fully themselves.

While the two seem to get along well, both in and out of bed, Elle has to decide whether she’s ready to start over and give love a chance.

Release Me, by J. Kenner

Similar to other books like Bared to You, Release Me is part of a book series following the story of Nikki and Damien.

While Nikki has recently moved from Texas to Los Angeles to pursue a career, she is also running away from her past.

At an art gallery party, Nikki runs into Damien and the attraction is instant. So it catches her off guard when he proposes to give her one million dollars if she allows him to paint her nude. After much consideration, she finally agrees to his offer.

As the two get to know each other completely, it is clear they both struggle with a dark past and although they perfectly connect physically they also have to figure out how to open up emotionally. It can be what makes or breaks them.

Although many might consider books on this list to be guilty pleasures, they are much more than that. Books similar to the Crossfire Series allow readers to learn, explore and be empowered. So proudly sit back in your reading spot of choice and enjoy a great steamy romance.

Are you searching for more books like The Crossfire Series? Have any recommendations that didn’t make the list? Let us know in the comments! 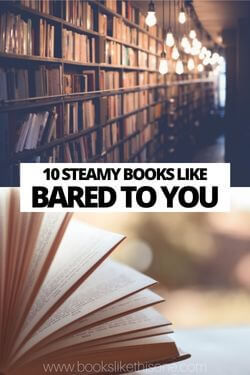