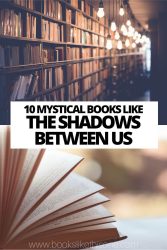 Books like The Shadows Between Us by Tricia Levenseller intrigue us readers with their strong and independent female characters. With many classic fantasy novels such as The Lord of the Rings lacking in good quantity of female characters, it is refreshing to read high fantasy women who are unapologetically themselves.

In this book, we follow Alessandra, a selfish and murderous young woman with a plan to marry and then kill the Shadow King before ruling the six kingdoms herself. Rather than the kind-hearted heroine we are used to in books of the same genre, Alessandra is an antagonist.

However, there are people other than Alessandra herself who wish to see the King dead and she finds herself saving his life more times than she’d like. In between all this, all Alessandra has to do is not fall in love. Sounds simple, right?

With her new take on the enemies to lovers trope, it is easy to see why so many adore Levenseller’s story but if you have already finished this one, what other similar novels are there?

Step into the dark, dangerous yet alluring world of the fae in Holly Black’s The Cruel Prince. The first of a trilogy, the book introduces us to Jude and her sisters who have lived among the fae since their parents were murdered and they were whisked away to the High Court of Faerie.

Ten years later, Jude is now seventeen and wants nothing more than to belong with the fae. However, the fae hate humans and their mortality, looking down at them, especially Prince Cardan.

To win the prince’s respect, Jude becomes entangled in royal politics and dangerous missions. Eventually, she realises Cardan and herself must put aside their hatred to help save all of Faerie itself.

Books similar to The Shadows Between Us give us strong and capable female heroines who do what they must to reach their goals.

The Hazel Wood, by Melissa Albert

Books like The Shadows Between Us allow us to enter magical realms and forget the real world. This concept is all too real for our main character, Alice, whose mother is stolen away by a figure claiming to be from the Hinterland.

The Hinterland is a supernatural world where Alice’s reclusive author grandmother set her tales. Alice’s only lead on her mother’s location is her warning to stay away from the Hazel Wood – the estate belonging to her late grandmother.

With the help of Finch, a Hinterland fanboy, Alice must venture to the Hazel Wood and then into the Hinterland to discover what has happened to her mother and who she truly is.

Pick up The Hazel Wood for an enchanting and exciting new read!

Elara will fall in love with a Star and it will kill them both. At least that’s the prophecy she has been cursed with. Set in a world where the Stars are ruthless gods, Elara’s kingdom has been taken over by the Star, Ariete.

Forced to flee to the neighbouring country, she meets Prince Lorenzo, The Lion of Helios. She begins to learn about the Star’s deceit and as she does, trains with the prince to develop the powers that reside within her in order to retake her kingdom and defeat the Stars once and for all.

If you like enemies-to-lovers books like The Shadows Between Us and want to explore this new world inspired by astrology and mythology, then add Heavenly Bodies to your bookshelf!

For another book similar to The Shadows Between Us, why not try reading Daughter of Smoke and Bone?

In this urban fantasy, black handprints are turning up around the world scorched onto doorways by strange, winged figures. We meet Karou, an art student in Prague whose natural bright blue hair, mysterious disappearances and sketches of monsters set her apart from others.

Karou has never known who or what she truly was so when Akiva spots her in an alley in Marrakesh, secrets and violence emerge as well as a powerful love. Now, Karou must decide whether learning the truth about her origins was truly worth it all.

In a world inspired by Ancient Rome, those who do not dedicate their lives to the Martial Empire risk the execution of those they love and the destruction of the lives they live.

Laia is a slave and when her brother is imprisoned for treason, she must make a choice: spy for the rebels in exchange for her brother’s rescue or do nothing and let the emperor wreak further havoc.

Now a spy in the Empire’s best military school, Laia meets fellow soldier, Elias, another who wishes to be free of the tyranny enforced by the Empire. Together, they realise they must do what no one else is willing in order to change the future for the better.

Have you already read this novel? Check out our list of books like An Ember in the Ashes!

Into the Crooked Place, by Alexandra Christo

In this novel, four crooks navigate the deadly streets of Creije with the use of magic. Tavia is a busker hoping to turn her back on crime whilst Karam spends her nights in fighting rings, attempting to make some sort of a name for herself.

Saxony is a resistance fighter in hiding intent on getting revenge on the people who wrecked her family. Then there is Wesley, a street rat turned gangster who wants to make the world pay for the suffering it caused in his youth.

The four must join forces after Tavia accidentally hands over a vial of dark magic to a loved one, sparking conflict all over the world. In times like these, trust goes a long way but with enemies all around, can they even trust each other?

For more dark magic and deception, try out Into the Crooked Place for another book similar to The Shadows Between Us.

A Dark and Hollow Star, by Ashley Shuttleworth

Pick up A Dark and Hollow Star for a captivating queer fantasy romance that follows the Eight Courts of Folk who have lived among humans, hidden by magic and lawfully restricted from harming a human.

These laws have kept the peace for years however, a series of brutal murders in Toronto threatens to expose the faeries.

Four teenagers must form an alliance when each of them holds pieces of information that are key to finding out who’s behind the murders. The four must find the killer before the Eight Courts are exposed to the humans and the brewing war dismantles the peace that has been kept for centuries.

Like The Shadows Between Us, this novel involves murder, magic and romance that is sure to entice you!

In this novel, the first of a series, we follow cyborg Cinder who lives in New Beijing, a city full of humans and androids alike. There is a plague epidemic and from space, the Lunar people watch patiently, waiting to pounce.

When Cinder’s life becomes intertwined with Prince Kai’s, she is stuck with a choice between responsibility and liberation. With forbidden feelings growing the more she spends time with Kai and Earth’s future in her hands, Cinder must face the secrets of her past.

If you liked the political struggle and unwelcome romantic feelings, then Cinder is right up your street!

An Enchantment of Ravens, by Margaret Rogerson

Like The Shadows Between Us, An Enchantment of Ravens follows an enemies to lovers plot where magic is the key to power and safety.

Isobel is an artist, painting beautiful portraits of the immortal fair folk who can’t make craft themselves. In return for her work, she receives enchantments.

When her first royal client visits, Isobel makes a mistake and paints the deadly emotion sorrow in the autumn Prince Rook’s eyes. Sorrow is a weakness – one that could cost him his throne. Deeply angered by Isobel’s mistake, he takes her to his kingdom to stand trial for her crimes against him.

However, when they arrive something is wrong and they both have to rely on each other to survive the attacks from all around. As they venture through the courts, something akin to love begins to blossom.

Sky in the Deep, by Adrienne Young

Books like The Shadows Between Us have strong female main characters like seventeen-year-old Eelyn in Sky in the Deep, who was raised to be a warrior.

Inspired by the Vikings, Eelyn is a part of the Aska clan who fight in an ancient rivalry against the Riki clan. Each day is survival until on the battlefield, she sees her deceased brother fighting for the opposing clan.

She is stuck between her love for her clan and her growing feelings for Fiske but survival always comes first.

Books like The Shadows Between Us combine magic with romance and politics, creating beautiful worlds we can immerse ourselves in. The books in this list allow us to escape the real world into fantasy so why not add one or all to your bookshelf?

Are you searching for more books similar to The Shadows Between Us? Have any recommendations that didn’t make the list? Let us know in the comments! 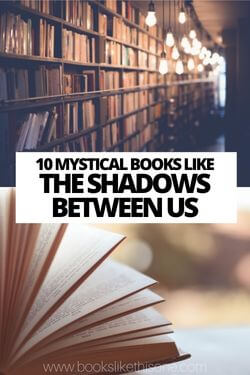