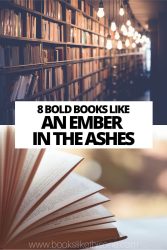 Books like An Ember in the Ashes are that rare thing; they have many sides to them. The cruelty and brutality of a civilised yet dictatorial empire mesh with themes of love and loyalty.

Tahir has stated that the series setting was loosely inspired by the Roman Empire. Whilst this can be seen in pieces, the world of the Martial Empire is different to that of ancient Rome.

The two-character perspectives of Laia and Elias – two seventeen-year-olds on (seemingly) opposite sides, are frequently tortured by the author, whether it’s in love or in just surviving the harsh realities of their world.

It’s easy to see why An Ember in the Ashes performed so well globally, but if you’ve already marched through the series, what other books like it are out there?

The Winner’s Curse, by Marie Rutkoski

This is another tale of two characters on opposite sides of a brutal empire. Books like An Ember in the Ashes play with this theme often, and Kestrel and Arin are similar to Laia and Elias. Kestrel is the daughter of a powerful general whilst Arin is a young slave who she buys at an auction because she loves his eyes.

If you are already rolling your own eyes at this, The Winner’s Curse is probably not the right book for you. If you stick with it though, you’ll find an interesting and well-told story filled with dangerous games, deceit and doomed romance. What more do you need from a YA fantasy?

Vampires. Teen romance. Glowering brows. If you’re thinking this is another Twilight, you wouldn’t be far off the mark.

Books similar to An Ember in the Ashes sometimes delight in forbidden and dangerous fantasy romance, and some readers love it. I personally feel every writer has a responsibility to their readers, and Crave is interesting because it walks a very fine line in giving the target reader what they want, whilst sparking a wider debate on whether stories like this help or hinder feminism.

On the one hand, it is about a young girl starting school and discovering a mystery; a boy (who happens to be a very old vampire) called Jaxon has been walled off from the rest of the school because he is considered “too dangerous”.

The protagonist is intrigued and feels “drawn” to Jaxon. This feeds a problematic heterosexual teenaged-girl fantasy of falling in love with someone who looks young and sultry but is old enough to be your great-great-great-grandfather.

There are really only a few things left to say, if you loved Twilight, you’ll love this. If you hated Twilight you’ll hate this.

Books like Fable riff on the hero’s journey a lot, but when it’s done well, you can’t help but enjoy them. Especially when they’re filled with deadly oceans, pirates, cutthroats, thieves and merchants.

In Fable, Fable (Fay) is our hero. Her mother died when she was young and she is abandoned by her father at aged fourteen. Fay has to use her own wits and skills to survive on an island filled with disreputable characters before she can attempt to leave to find her father. All to prove to him that she has what it takes to be the daughter of the King of Traders.

Fable is filled with adventure, romance, derring-do, and spirit.

Sky in the Deep, by Adrienne Young

Wonder Woman meets Vikings? Books like An Ember in the Ashes enjoy taking action hero tropes and smashing them together to see what happens.

Say hello to seventeen-year-old Eelyn, a fighting member of the Aska clan who are forever in a rivalry with the Riki clan. After Eelyn discovers her brother (presumed dead) is fighting with the Riki, she is captured and must spend time with her enemies.

Yet, things are more complicated; a legendary brutal clan has been attacking Riki villages and now Eelyn has to work with the Riki and unite the clans to face this new threat.

Sky in the Deep could easily fall into the similar feel of all YA fantasy, and if the characters weren’t compelling, this story would just be the same old tale. Fortunately, Eelyn and Fiske are compelling and the interpersonal relationships believable. Worth a read.

The Wrath and the Dawn, by Renée Ahdieh

Patriarchal societies are cruel and unhealthy for all involved. If the human race is to survive, they need to be replaced with a more equitable state of living.

The Wrath and the Dawn – perhaps unintentionally – goes to great lengths to remind readers of the dangers of patriarchal power and the brutal and cruel ways people use it. Books similar to An Ember in the Ashes aren’t afraid to get down and dirty, and The Wrath and the Dawn is a good example.

In a land ruled by a horrible and murderous boy-king called Khalid, a young woman named Shahrzad has vowed to get close and kill him. Vengeance for the death of her friend and all the other young women Khalid murders after he takes them to his bed. Yet, somehow, Shahrzad finds more to this murderer than meets the eye and begins to develop feelings for him.

Like Crave, Twilight and similar YA fantasy romance novels, The Wrath and the Dawn is a good challenge to readers. It does pose an important question: are young girls using books like this to form their ideas of what love should be? If they are, how comfortable are we to champion books like this? Read for yourself and tell us what you think in the comments.

Crossroads and the Himalayan Crystals, by C. Toni Graham

Who hasn’t dreamed of going to school one day before finding yourself in another world filled with magic?

I used to do it a lot when I was at school and was regularly told off by my English teacher for daydreaming. If I ended up in “The Otherworld” of Crossroads and the Himalayan Crystals maybe I should be glad my teacher did wake me up sometimes.

The Narnia parallels here are quite clear: Four children, (Conner, Jake, Seneca and Shayna) accidentally enter a portal and get transported to “The Otherworld”. When the portal closes, they find themselves trapped in a conflict between good and evil.

Forced to choose between their new friends or the welfare of their loved ones, these four children are taken on a rollercoaster of emotions.

Books like An Ember in the Ashes work hard to up the stakes at every turn. This is no different, and is a fun and enjoyable read.

Books similar to An Ember in the Ashes are filled with the darkest shades of humanity, so what better to recommend than a book part written by one of the literary masters of horror and darkness?

Gwendy’s Button Box is a novella that follows Gwendy, a twelve-year-old girl whose life changes irrevocably when she meets the man with neat black hat on top of Castle View. When that man gives her a gift; a button box that dispenses chocolates with one lever and silver coins with the other, Gwendy is initially excited. But all things come with a cost.

If you enjoy the darker moments of An Ember in the Ashes, this highly focused short tale will keep you shivering for months on end.

A young woman pretends to be a man in order to feed her starving people, is the Robin Hood-like elevator pitch for this novel. Novels like An Ember in the Ashes pit plucky and outmatched heroes against powerful brutal oppressors, sometimes mirroring the bloody history of the human race.

In We Hunt the Flame, Zafira is the Hunter, a woman disguising herself as a man just so she can get enough food for her people. Nasir is the son of the sultan, an autocratic sexist who has decreed death for anyone that dares to defy his rule.

Nasir and Zafira’s fates intertwine as the dark cursed forest of the Arz threatens the land. What helps this book is the Arabic setting and cultural influences.

Western audiences who love slow-burning romances will find a lot to enjoy here.

Books like An Ember in the Ashes blend romance with fantasy, adventure with politics. The titles above are just some of the many you can find on bookshelves in the library or in a bookstore.

Are you looking for more novels similar to An Ember in the Ashes? Have any recommendations that didn’t make the list? Let us know in the comments! 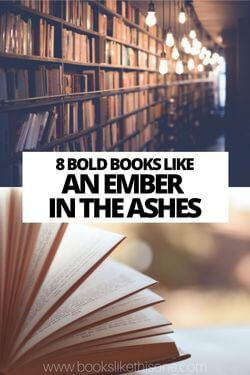