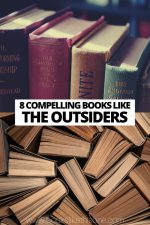 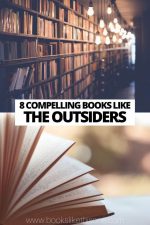 SE Hinton’s debut 1967 novel The Outsiders has been enthralling readers since it’s publication over fifty years ago. Written by Hinton when she was only 16 years old, The Outsiders continues to be a favourite for fans of the young adult genre. Though it is also famous for the 1983 Francis Ford Coppola film adaptation, keen readers are always looking for more books like The Outsiders.

If you enjoyed SE Hinton’s iconic novel and are keen to find more titles similar to The Outsiders, check out these eight great novels that are sure to spark the same emotions and cover similar themes.

That Was Then, This Is Now, by SE Hinton

SE Hinton’s second novel, published in 1971, That Was Then, This Is Now is an obvious choice for those looking for books like The Outsiders.

Much like Hinton’s first novel, this book is a coming of age story that follows two teenage boys, Mark and Bryon, living together in Tulsa, Oklahoma after the death of Mark’s parents. Because they are living on their own, the book explores the dynamic of Mark and Bryon’s relationship as they are forced to fend for themselves as teenagers without adult supervision.

The novel follows similar themes to The Outsiders and even includes a cameo by Ponyboy Curtis, the protagonist of Hinton’s first novel. Including the same kind of honest teen struggles and examining the social hierarchies in teen life, That Was Then, This Is Now is the perfect choice if you’re looking for a book similar to The Outsiders.

Another of the most obvious choices if you’re looking for a book similar to The Outsiders is SE Hinton’s 1975 novel Rumble Fish.

The novel follows Rusty-James as he recounts the story of his early teenage years to an old friend. Much like in Hinton’s other novels, the young Rusty-James lives with his older brother in a very low-income, rough area and his parents are not in the picture. It explores such dynamics like gang life and social standings along with bringing to attention some more difficult teen issues in ways that novels of the time rarely did.

Like The Outsiders, Rumble Fish was turned into a feature film by Francis Ford Coppola in 1983, however, unlike Hinton’s previous novels, there is no crossover of characters in Rumble Fish. Despite this, the book certainly follows a similar storyline and themes and is a really good choice if you’re looking for books like The Outsiders.

The Catcher in the Rye, by JD Salinger

Arguably the most notable book with a teenage protagonist ever to have been published, no list of books like The Outsiders would be complete without including JD Salinger’s The Catcher in the Rye.

The novel follows Holden Caulfield, a 17-year-old boy who has just been expelled from an elite boarding school as he spends a few days on his own in New York City before heading home to face his parents.

A quintessential coming-of-age novel, Holden is often considered to be one of the most unsympathetic protagonists in literary history, however, many readers to this day are taken in by his story. His constant pursuit of seeking a human connection and trying to see people for who they really are are things that many people can relate to and it also brings to attention how isolating it can be to be a teenager.

Though it has been incredibly popular since it’s publication, it is also considered to be one of the most censored and challenged books of all time, known for its strong language and sexual themes.

Despite its controversy, The Catcher in the Rye has influenced many writers in the Young Adult genre, and it is the perfect choice if you’re looking for a book with similar themes to The Outsiders.

For more book recommendations, browse our books like The Catcher in the Rye article!

Another one of the greatest young adult novels of all time and one that doesn’t sugarcoat the struggles facing teenagers in high school is Stephen Chbosky’s 1999 book The Perks of Being a Wallflower.

This epistolary novel follows Charlie as he begins his first year of high school immediately following the suicide of his best friend. Losing his most trusted companion, Charlie is introverted and isolated but begins to open up as he makes friends and connections with a group of students.

Much like in The Outsiders, this novel follows teenagers in an honest and straightforward way and really draws to attention some of the struggles that young people can face. Covering themes like sexual assault, drug use, homosexuality, and mental illness, The Perks of Being a Wallflower has certainly been met with its fair share of controversy, much like SE Hinton’s debut novel.

Therefore, if you’re searching for books like The Outsiders because you enjoy an intelligent and honest depiction of teenage life, The Perks of Being a Wallflower is a great choice for you.

John Green’s first novel Looking for Alaska is another great choice for those looking for books like The Outsiders especially if you liked the honest telling of teenage life in Hinton’s novel and the social hierarchies explored there.

This 2004 book follows Miles “Pudge” Halter as he transfers from a normal public high school to a small boarding school in Alabama. While at school, he forms relationships with a group of smart, troublemaking misfits while he fosters a formidable crush on the spirited and troubled Alaska Young.

Along with examining theme like teenage drinking, depression, dealing with grief and loss, Looking for Alaska also explores the dynamics of a wealth divide and the certain privileges that those with money are awarded compared to those who don’t come from means.

Subject to lots of criticism and controversy, Looking for Alaska is currently being developed into a miniseries for the online platform Hulu, due to be released later in 2019. It is also just a fantastic book to read if you’re on the hunt for more novels like SE Hinton’s The Outsiders.

For more book recommendations, browse our books like Looking for Alaska article!

Eleanor and Park, by Rainbow Rowell

Rainbow Rowell’s 2013 novel Eleanor and Park is a fantastic choice for readers who enjoyed The Outsiders.

Set in the 1980s, this critically-acclaimed book follows teenage high school students Park Sheridan and Eleanor Douglass. Park is a mildly popular 16-year-old from a middle-class family who forms a friendship and romantic relationship with Eleanor. Eleanor is overweight and comes from extreme poverty, is frequently horribly bullied in school, and lives with her mother, siblings, and abusive stepfather.

The book deals with such issues as bullying, domestic abuse, and body image issues and will certainly tug on your heartstrings while making you deeply care for the characters. It also explores similar economic themes as The Outsiders including examining the privileges and security that wealth can provide.

Since its publication, Eleanor & Park has received much critical acclaim and it is a fantastic addition for anyone looking for books like The Outsiders.

The Absolutely True Diary of a Part-Time Indian, by Sherman Alexie

Sherman Alexie’s The Absolutely True Diary of a Part-Time Indian has garnered a mountain of both critical acclaim and controversy since its publication in 2007. Dealing with themes like poverty, bullying, and coming of age, it is a great option if you’re looking for books like The Outsiders.

Set in the state of Washington, The Absolutely True Diary of a Part-Time Indian follows 14-year-old Junior, a boy of Native American descent living in an Indian reservation. Because of his academic achievement and precocity, Junior gets the opportunity to attend a school in a much wealthier and better-funded district than he would ordinarily be permitted where he is the only student of Native American ancestry.

Junior is forced to learn and adapt to a much different lifestyle than he is used to and he is constantly confronted with the wealth disparity that plagues that the United States. Much like in The Outsiders, this novel examines socioeconomic privilege and hardship extremely well.

Again, though it has been met with significant controversy due to some of its content, The Absolutely True Diary of a Part-Time Indian is a fantastic addition to any young person’s reading list.

Mark Haddon’s 2003 novel The Curious Incident of the Dog in the Night-Time may not be the first title that comes to mind when searching for books like The Outsiders, however, it is an excellent read and it is sure to satisfy readers who also enjoyed the SE Hinton novel.

The Curious Incident of the Dog in the Night-Time is told from the perspective of 15-year-old Christopher John Francis Boone, a young man living in a London suburb who is on the Autism Spectrum.

The novels centres around Christopher’s discovery of his neighbour’s dog having been killed on a garden fork and his obsessive investigation into the dog’s death. While his investigation is the main plotline in the book, it also explores with great detail and empathy exactly what it is like to live with a social disability and how people with Autism Spectrum Disorder both think and are treated.

While it doesn’t explore the socioeconomic themes that The Outsiders does, it still examines the social structure of our society and how it treats those with disabilities.

There are numerous books like The Outsiders that can stir the same emotions and delve as deep into similar themes as SE Hinton’s iconic novel.

Are you looking for books like The Outsiders? Do you have any that didn’t make the list? Let us know in the comments! 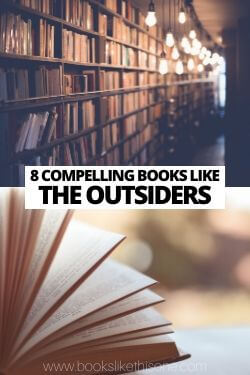