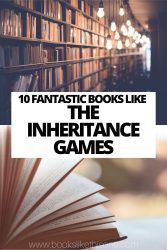 Are you on the hunt for more books like The Inheritance Games?

Avery Grambs does what she can, all day and every day to ensure she can get into a good school and leave behind the life she exists in. Being an orphan and spending every day on her own has made her a hard worker which is why she is surprised and bewildered when a billionaire stranger names her the heir of his entire fortune in his will.

It seems like a dream come true until Avery realizes there are conditions to her receiving the fortune such as living in the Hawthorne manor for an entire year whilst allowing his disinherited family to reside there with her.

It is clear that Tobias Hawthorne is conducting an elaborate scheme from beyond the grave in which Avery and his own family are pawns in his game. However, she soon realizes that in order to survive the next year and escape with her life, she must navigate the secret passageways and hidden rooms… or else.

Full of surprises and thrilling adventure, The Inheritance Games is the first book in a magnificent mystery thriller series. However, if you have already read this, you are probably looking for a book like The Inheritance Games. Continue reading to get my recommendations!

In Truly Devious, Ellingham Academy is renowned for its famous unsolved kidnapping and murder of the school’s own founding family in the 1930s.

In the present day, Ellingham Academy is a boarding school for gifted students such as Stevie Bell, our main character.

A crime fanatic, Stevie is obsessed with the Ellingham murder mystery, and her arrival at the school is emphasized by a current-day murder mystery when one of the students is killed under suspicious circumstances.

Without anyone to trust, Stevie is determined to be the one to solve both Ellingham Academy murder mysteries.

This thrilling young adult mystery book like The Inheritance Games is perfect for those looking for a great read!

The Naturals, by Jennifer Lynn Barnes

When looking for a book similar to The Inheritance Games then why not look at the author’s other books themselves?

In Jennifer Lynn Barnes book The Naturals, we meet Cassie Hobbes. Cassie lost her mother in a truly bloody murder.

She is also a talented people reader, able to understand and figure out a person’s motivations and intentions easily. She had never taken this particular skill seriously until she is secretly recruited by the FBI as a profiler to crack infamous cold cases.

The other people on the program are what they seem and with a new killer on the loose, surviving seems to become a challenge in itself. Read another book of this talented author’s selection and indulge in your next thrilling mystery book.

A Study in Charlotte, by Brittany Cavallaro

Everyone knows the name and legacies of Sherlock Holmes and John Watson but not many know of Charlotte Holmes and Jamie Watson, their descendants. After the Holmes and Watson families fell out, the pair had never encountered one another until they enroll at Sherringford school.

Charlotte is every bit Sherlock Holmes’ descendant with her quick wit and genius and much like his forefather, Jamie finds himself drawn toward her again and again. Therefore, when a student dies, they find themselves suspects number one.

Finding companionship within one another whilst fighting to prove their innocence, A Study in Charlotte is the perfect story of friendship and romance.

This book like The Inheritance Games has the perfect mystery for those looking for their next whodunnit.

In The List, Beth Belmont runs every single day, on the same trail without fail. She knows every rock, every tree, every turn and every path.

Therefore, one day, when she spots a slip of white paper on the floor of the usually spotless path, something in her tells her to pick it up and read it.

When she does, she realizes the paper lists five names, the third of which is her own. Unnerved, Beth searches the names upon the paper only to find that the first two names belong to two dead women.

Worried and afraid, Beth realizes she may be the next target of a killer which leads her down a dark and dangerous path towards the truth.

A surprising and exciting thriller book like The Inheritance Games, this novel will have you turning the pages!

In Thirteen, an exciting murder mystery book similar to The Inheritance Games, we meet one-half of Hollywood’s hottest power couple. The other half is dead.

Robert Solomon is charged with the brutal murder of his beloved wife and the case is the most infamous and unbelievable celebrity murder trial of its time. Of course, the defence team are looking for the best they can get ie. Eddie Flynn.

With all the evidence pointing towards Robert as the suspect and murderer, Eddie isn’t so sure when sinister events within the courtroom itself begin to occur.

The trial is a long and gruelling process and with Robert denying any involvement with his wife’s murder, Eddie begins to connect the dots.

Kya Clark is a wild girl considered entirely unfit for polite society in the 1960s. Therefore, she is the perfect suspect when the popular Chase Andrews is found dead.

Many think her isolated upbringing means she is feral and untamed but really, she yearns for love and attention. When she captures the attention of two men from the village, she begins to open herself up until something occurs that will change everything.

Now a live-action film, Where the Crawdads Sing is the perfect replacement book similar to The Inheritance Games.

Four friends living in a peaceful retirement village meet every Thursday to discuss their shared passion of unsolved crimes. They like to call themselves The Thursday Murder Club.

So, when a real-life dead body turns up with a mysterious photograph by its side, the group of pensioners decide they must solve this case before they never get the chance again. But as the bodies pile up, can they solve this true crime before it is too late?

This book like The Inheritance Games focuses on a great and emotional mystery, following a family.

In We Were Liars, Cadence had a tragic accident on her family’s private island which led to losing her memories.

She remembers fragments of the holiday such as spending the summer with her cousins, the arguments between her family about who will inherit the estate and the rift this argument caused.

She also remembers the suggestion of burning the estate to the ground to remove the root of their families’ problems. Then… she remembers nothing.

Finally revisiting the island after two years, Cadence’s memories slowly but surely begin to come back to her and the truth is revealed… for better or for worse.

Nothing More to Tell, by Karen M. McManus

A book coming to our shelves in September 2022 from bestseller Karen M. McManus, we meet Brynn who four years ago, left her school after the brutal and shocking unsolved murder of her favourite teacher.

The three students who found Mr Larkin’s body definitely know more than they are letting on, especially her ex-best friend, Tripp.

Secrets are everywhere and populate the school so when Brynn gets an internship at a true crime show, she knows the first case she needs to investigate is Mr Larkin’s death.

But the closer to the truth she gets, the more danger presents itself.

Add Nothing More to Tell to your to-be read list for your next book similar to The Inheritance Games.

If you are looking for a great mystery book like The Inheritance Games then look no further than A Good Girl’s Guide to Murder.

It is a well-known fact that Sal Singh killed Andie Bell. Pippa Fitz-Amboi has an obsession with the murder that rocked the small town and chooses it for her final year project at school.

However, by pursuing the case, she uncovers secrets that someone in the town would prefer to stay secret.

With the true killer running free and Sal Singh wrongfully imprisoned, Pippa realizes she is in a sticky situation and that if she isn’t careful then her investigation will end with her as the next dead schoolgirl.

A murderer is on the loose and how far will they go to ensure their identity is kept a secret?

Have you already read this novel? Check out our list of books like A Good Girl’s Guide to Murder!

If you have already read The Inheritance Games, loved it and are looking for a similar book, I have compiled a list for you to find the next book to pick up! I hope this list provides you with your next great read that will keep you entertained with every page much like books like The Inheritance Games!

Are you looking for more books similar to The Inheritance Games? Have any recommendations that didn’t make the list? Let us know in the comments! 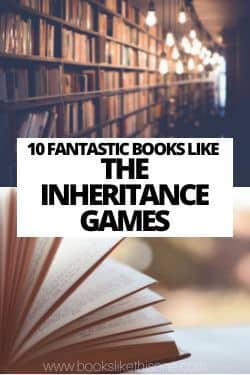