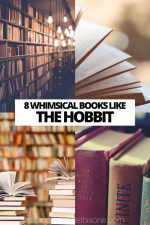 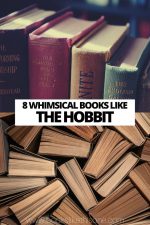 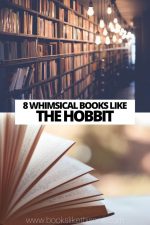 “In a hole in the ground there lived a hobbit.”

I was 8 when I first read The Hobbit and it was that opening line that hooked me. Bilbo Baggins is now one of the most famous fantasy characters of all time and there are many books like The Hobbit that drew inspiration from his adventure.

Despite his flaws, (grumpy, a bit useless at first) Bilbo soon wins your heart over. There are so many touchpoints to love (the way he tricks 3 trolls who want to eat him, his liberation of a certain magic ring from the creature, Gollum, his confrontation with the dragon, Smaug) that it is hard to pick a favourite.

The prelude to Lord of the Rings was written specifically for children and is still a delight to read. But there are other similar delights if you’re looking beyond Middle Earth.

Books like The Hobbit don’t come any more whimsical than this warm blanket of fantasy. The first in a series of books, Kiki’s Delivery Service is about a young witch setting out on her own to find a town she can help. Kiki along with her cynically hilarious black cat arrive at a seaside town, determined to aid the townsfolk in some way – because that’s what witches do in this world.

After a few false starts, she ends up starting a business delivering packages to customers on her broomstick. And Kiki’s delivery service is born! It’s hard to pinpoint exactly what is so endearing about this novel. On the face of it, the plot is light. However, the characters, Kiki, in particular, shine out like warm sunbeams.

Amongst other adventures, Kiki ends up befriending a thief who stole her broomstick and saves the town’s New Year’s marathon with some excellent flying. First published in 1985, Kadono’s tale became beloved in her native Japan before rocketing to worldwide fame when Studio Ghibli adapted her first book into an animated feature.

Kiki’s Delivery Service is as warm as it is fun. Perfect for children and adults alike.

The Dyerville Tales, by M.P. Kozlowsky

The ‘quest’ theme permeates novels like The Hobbit. The Dyerville Tales is a sharp and thrilling children’s fantasy that rightly treats the target audience with the respect they deserve. This novel shines because of it. When orphan, Vince Elgin, receives a letter telling him his grandfather has passed away, he is somehow convinced his father is still alive.

Along the way, he begins to realise that the tales in the journal might be closer to reality than he thought. Fact and fantasy soon blend together leaving you desperate to finish the story.

The Girl Who Drank the Moon, by Kelly Barnhill

Witches can be found in many books like The Hobbit and Xan from The Girl Who Drank the Moon is one of the more memorable ones.

Xan is a gentle and kind witch who shares her home with Glerk, a wise swamp monster and a ‘Perfectly Tiny Dragon’ called Fyrian. Together they protect Luna, one of many children abandoned in the forest by the people of the nearby town called, Protectorate.

Xan has been rescuing the abandoned children for years before sending them off to welcoming families on the other side of the forest. Not so with Luna, for Xan accidentally fed moonlight to her as a baby filling Luna with powerful magic before locking it away until she was old enough. Now the magic is coming out and a young local man is out to prove himself by killing the witch.

Does Luna have what it takes to protect the forest and the creatures who have kept her safe? You already know the answer, but the joy comes from reading it. This book is filled with magic and kindness united against ignorance and lies. A lovely cocktail to give to any child interested in reading.

The Magician’s Nephew (Book 1 of The Chronicles of Narnia), by C.S. Lewis

Along with The Horse and his Boy, this is a book like The Hobbit that never gets mentioned as much as The Lion, the Witch and the Wardrobe. It is a shame because The Magician’s Nephew is one of Lewis’s most magical entries to the Narnia series.

The tale of young Digory and Polly getting flung accidentally into ‘somewhere else’ by his eccentric Uncle Andrew (who thinks he’s a magician), before finding their way to Narnia, is spectacular. There are scenes both wondrous and frightening. Digory and Polly landing in a dreamlike forest filled with pools that end up being portals to other worlds, sticks in the mind.

The scene where Digory and Polly enter a ruined palace in the land of Charn, to find frozen life-like statues along with a bell and a hammer inviting the finder to strike. So many things about this book chime with Bilbo’s adventures in Middle Earth. It is perhaps no surprise that Tolkien and Lewis were friends and colleagues.

Lewis often gets accused of preaching Christian theology throughout the Narnia books. Yet, whilst there are character parallels between Narnia and the New Testament (Aslan is essentially Jesus), Narnia is far better written, more imaginative and less pious than any biblical text.

The Magician’s Nephew is a tent pole of children’s fantasy, filled with magic, mysticism and baddies galore.

The Nethergrim, by Matthew Jabin

A magical quest to battle evil and save the day remains a strong trope in books like The Hobbit. It is how they are written that lift them above other stories, and The Nethergrim is a fantastic example of children’s fantasy done right.

When a group of children go missing, the people of Moorvale know the Nethergrim has returned. Edmund’s brother is one of the missing and Edmund wants to help. Except Edmund is still only a student of magic and struggles to cast even a simple spell. Nevertheless, he and his friends are determined to face their fears and set out to find the children and possibly battle an evil beyond their comprehension.

It is easy to compare Edmund to Bilbo, though some would say Harry Potter bears a closer resemblance. Yet where Harry always magically saves the day despite being a poor wizard, Edmund messes up often. But Edmund learns.

He is not ‘a chosen one’. He’s the son of an innkeeper, learning magic in his spare time and without his father’s knowledge. His friends come from an equally humble background; slave of a cruel master and daughter of a stable master.

There are no magical ‘get of jail free’ cards in this tale. Just Edmund and his small band of ill-prepared friends making it well worth a read.

One of my favourite children’s books of all time (that can easily be read as an adult), is this gloriously magical title penned by the talented Diana Wynne Jones. Much like The Hobbit in its whimsical and charming nature, The Merlin Conspiracy follows Roddy and Grundo, two children travelling with the Royal Court of Blest.

When the Merlin of Blest dies, only Roddy and Grundo feel something is wrong. They soon discover a plot by other courtiers to steal the magic of Blest and use it for their own nefarious purposes.

What makes this tale sing, is the way Jones blends familiar elements of our own world (computers and double-decker buses) with the more magical fantasy tropes. The story literally enchants you along, enticing you with treats until you get to the end and are left equally thrilled and bitterly disappointed that it’s all over.

This is the second of the Magids books Jones wrote (the other being Deep Secret) and carries on her imaginative (and very funny) take on the multiverse theory. So many fantasy books lack humour. Like The Hobbit, The Merlin Conspiracy embraces the mirth with the magic, intertwining both expertly.

Another author who knew how to blend fantasy with laughter was the inimitable Terry Pratchett. The Wee Free Men is one of many books like The Hobbit that remembers the power of a light touch in a fantasy setting.

Part of the Discworld series, this novel introduced readers to the young witch, Tiffany Aching. Tiffany ended up becoming one of the most memorable characters in the series and when you read this, it is easy to see why.

“There’s no one to stop them.”

There was silence for a moment.

Then Tiffany said, “There’s me.”

Both Bilbo and Tiffany are reticent to fight against the monsters they are forced to, yet both know the difference between doing what is easy, and what is right. Tiffany is merely a young witch-to-be at this stage, yet she is all that stands between the warm green chalk country of her home, and the monsters of Fairyland.

She knows she has to defend her home but has the common sense to know she can’t do it alone. Enter the Nac Mac Feegles (also known as the Wee Free Men), a local clan of six-inch tall blue men who steal sheep, wield swords and get drunk so often they can’t remember the last time they were sober.

Filled with memorable dialogue, locations, beauty and joy, The Wee Free Men is a must-read for any child interested in fantasy.

Northern Lights (The Golden Compass): Book 1 of His Dark Materials, by Philip Pullman

Books like The Hobbit often start with the protagonist being confronted with a choice: stay safe or risk the adventure. In Northern Lights (published as The Golden Compass in the USA), Lyra Belacqua chooses the latter when her friend Roger goes missing.

With rumours of Gobblers (child catchers) stealing dozens of children and taking them to a mysterious prison in the North Pole, Lyra chooses to follow. Determined to save her friend, rescue the other children and find her uncle, Lord Asriel, Lyra discovers more than she could have imagined.

What marks Pullman’s tale is the clever complexity he weaves within the narrative. In Lyra’s world, human souls physically manifest as daemons, with each human having a different daemon. Separate one from the other and both die. This has led many to debate whether or not Pullman was making a philosophical statement.

Do human beings have souls? Is organised religion inherently a bad thing? When confronted with the Magisterium in Lyra’s world, it could be hard to argue otherwise. Like all good authors, Pullman leaves it up to the reader to decide.

What is inarguable, is the sheer excitement and fun to be had in following Lyra on her journey and readers are advised to continue with The Subtle Knife and The Amber Spyglass. There’s a reason His Dark Materials has won so many reader and critics awards, including the Carnegie Medal.

Books like The Hobbit combine whimsy with magic, humour with wild imagination, terror with joy. Bilbo’s unexpected journey has captured the public imagination for nearly a century. Only time will tell if the books above do the same. This list gathers only some of our suggestions, but there are many more to find.

Are you searching for more novels similar to The Hobbit? Have any recommendations that didn’t make the list? Let us know in the comments!