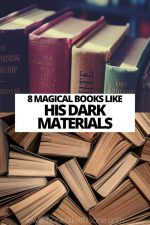 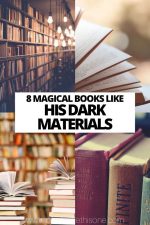 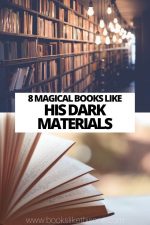 Are you searching for more books like His Dark Materials?

Some books remain popular for a reason. They are well written, have memorable characters and are filled with fantastic settings. The first book in His Dark Materials slipped onto bookshelves way back in 1995 with Northern Lights (published as The Golden Compass in North America). This was followed by The Subtle Knife in 1997, and The Amber Spyglass in 2000.

The story follows Lyra Belacqa, a 12-year-old girl who lives in an alternative version of our own world, as she slowly uncovers a conspiracy to dominate people’s souls by the ruling theocracy (the Magisterium – also known as ‘the Church’). In Lyra’s world, your soul lives outside of your body in the form of a daemon. You can talk to it, and it changes form regularly until you mature when the soul settles into its final form.

What makes these books great, is the imagination on display. Pullman expertly posits worlds much like our own, and some that are wildly different and terrifying (see The Subtle Knife). Lyra remains one of the best lead characters in YA and children’s fiction and has far more agency and colour than certain other popular children’s fictional characters.

However, if you’ve already read His Dark Materials, what other books can sate your soul?

The Invisible Library, by Genevieve Cogman

Books like His Dark Materials enjoy plunging the reader into familiar, yet different realities. In The Invisible Library series, we follow Irene, a professional agent for ‘the library’ a place that harvests and retrieves fiction from different realities.

Magic, supernatural creatures (including dragons and faeries) fill the realities Irene has to cross in order to function as a librarian. The thing I like most about this series is the sense of unbridled joy that permeates Cogman’s writing. Irene is wily and clever, but she isn’t without her own flaws, and can often be impetuous in her efforts to help the library.

The library itself is dark and bright at the same time. At turns endless, but with enough familiarity to provide a sense of comfort to anyone who adores libraries. Memorable characters, amazing worlds and a love of books you’d be hard pushed to find in other fantasy novels, The Invisible Library is one to read.

Parallel world and realities are ten-a-penny books like His Dark Materials. Yet, Arcadia doesn’t just spin the penny; it tosses a whole bag of coins into the mix. One of the most spectacularly thrilling spy stories is blended with fantasy in Arcadia.

It begins with Rosie becoming a confidante of her neighbour, Professor Henry Lytten. Henry is writing a fantasy novel that imagines a world less fraught than the cold war era he and Rosie both live in. Rosie then stumbles into the very fantasy world that Lytten has been writing about when she chases Lytten’s cat into his cellar.

This is just the beginning of what becomes a complex and wonderfully Shakespearian espionage romance fantasy thriller. Politics, historical spy fiction, dystopian futures, time travel… if you aren’t hooked already, then you never will be. A treat from start to finish.

Books similar to His Dark Materials often have a strong female lead character like Lyra. In Doomsday, we follow Kivrin, a young time-travelling archaeologist who is busy preparing an on-site study of the 14th Century.

Things go awry when Kivrin is stranded in the past whilst her instructors and fellows try to rescue her. She must overcome the superstition and fear prevalent in the 14th Century if she is to survive, but might she also be able to bring about some hope in an otherwise dark and difficult time?

This is a wonderful adventure in history from start to finish, seeped in fact, fiction and the complex murk in between. Kivrin is forced to think on her feet when she is cut off from her support, becoming our conduit through which we see 14th Century England in a way we don’t learn about in history. Middle English does not sound as we expect, and the realities of the plague and political problems are very much on display.

At heart, Doomsday is a joyous leap into the past, and a book that reminds us that history is an adventure all of itself.

The Library of the Unwritten, by A.J. Hackworth

Every writer I know has unfinished business. Hell’s Library is another series like His Dark Materials that delights in playing with reality. The Library of the Unwritten will make every writer squirm and lament all the lost stories we abandon every year.

Claire is Head Librarian of the Unwritten Wing, a quiet place in Hell where every story unfinished by its author, resides. Claire’s job is to keep the library in order. Make sure none of the restless stories materialise as characters and escape. Then, a Hero does escape his unfinished book and it is up to Claire to track and capture with only a nervous demon and assistant to help.

This is a highly imaginative and, for me, uncomfortable story about all the stories we leave unfinished as writers. Claire is a strong lead and the characters of Brevity and Andras are a joy to read. Dive in to hell if you dare!

Away from the noise of the TV adaptation of His Dark Materials, you can find this prequel novel.

La Belle Sauvage brings us the story of how Lyra ended up gaining scholastic sanctuary at Oxford University. Going back in time before the events of your standout success story, can be dangerous, but Pullman gifts us a slow-burning tale that gently re-introduces all the elements we came to love in His Dark Materials.

Malcolm is the perfect lead for this story too. An everyday boy who is dragged into an adventure of magic as he strives to protect the baby Lyra and her daemon from malevolent forces determined to take the child.

What better way to find books likeThe Golden Compass than one that takes place within the same world?

The Magician’s Nephew, by C.S. Lewis

The grandfather of modern children’s fantasy and parallel worlds, C.S. Lewis is most remembered as the author of The Lion, the Witch and the Wardrobe, but The Magician’s Nephew takes place before those events, giving us Digory and Polly as the principal protagonists.

This story gives us the history of how Narnia is created, some more background on Jadis (the White Witch) and just how that lamppost ended up in the middle of a snowy forest in Narnia. Parallel worlds are plentiful in this story, which sees Digory and Polly visiting several before the come to witness the creation of Narnia itself.

Magical, fun, and filled with adventure, The Magician’s Nephew is the perfect read for fans of His Dark Materials.

A Wrinkle in Time, by Madeleine L’Engle

First of the Time Quintet, this wonderful children’s fantasy debuted way back in 1963. This book is often cited as one of the books that encouraged a generation of children to pick up a pencil and write fantasy stories.

The reason books like The Golden Compass and His Dark Materials series sell so well is because they do not treat their readers like idiots. Children are a lot smarter than adults give them credit for. A Wrinkle in Time is no different. It works under the assumption that its mainly young audience can work out what is going on without being handheld all the way.

Meg is a brilliantly designed character. She feels real. When that stranger first appears on her doorstep and beckons Meg to accompany them on an adventure that threatens the universe you feel Meg’s wonder and fear. Many highly intelligent and successful women grew up under the spell of L’Engle’s tale.

A loving and clever read for anyone who likes questioning our place in the universe.

The Shadow of the Wind, by Carlos Ruiz Zafón (translated by Lucia Graves)

Books like His Dark Materials force us to question the authorities who claim they only have our best interests at heart. In The Shadow of the Wind, we follow Daniel, an antiquarian book dealer’s son, still mourning the loss of his mother. Daniel finds solace in a book called The Shadow of the Wind, but when he tries to find the author’s other books, he discovers someone is systematically destroying every single copy.

Set in Barcelona 1945, the backdrop of this tale is a worn and weary city trying to recover from its war wounds. Daniel’s quest is intriguing and painful at the same time. Trying to find answers to why anyone would wantonly destroy books is always compelling, (see Fahrenheit 451) and The Cemetery of Forgotten Books is an outstanding work of imagination.

Fans of Pullman’s trilogy will love this.

Already read this book? Check out our list of more books like The Shadow of the Wind!

Books like His Dark Materials aren’t afraid to challenge and provoke a reader’s mind. Children and adults alike will enjoy the titles above, but if you feel we’ve missed some key titles, please let us know in the comments below.

Are you searching for more books like His Dark Materials? Have any recommendations that didn’t make the list? Let us know in the comments! 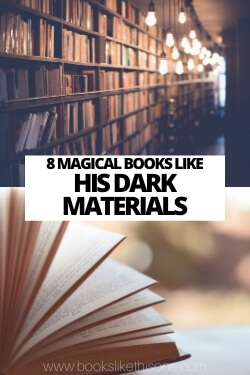