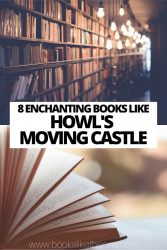 Are you looking for more books like Howl’s Moving Castle?

Howl’s Moving Castle was written by the very much missed, Diana Wynne Jones. Jones’ sense of humour and wonder flows and twists through her books like Howl’s magic. Wynne Jones was a master storyteller, an acclaimed poet, and a huge fan of science fiction and fantasy.

Whilst most of her books appear aimed at young adults and children, you can enjoy her stories at any age. Wynne Jones, like all good authors, never underestimated her readers.

The sophistication and elegance of her storytelling is something that has inspired many writers, myself included. Yet, if you’ve already read Howl’s Moving Castle, what other books like it are out there?

The Last Dragonslayer, by Jasper Fforde

Books like Howl’s Moving Castle delight in making their readers laugh. Like Wynne Jones, Fforde’s writing is designed to play your funny bones to the point where you get strange looks from people sitting next to you on the train.

In The Last Dragonslayer, Jennifer Strange is a fifteen-year-old foundling who runs, Kazam, an employment agency for magicians. Her job is to keep the remaining wizards and magicians of the world, employed and out of trouble.

Magic has been drying up for centuries and it feels like there soon won’t be any left. But then Jennifer begins getting visions about the death of the last dragon, on Sunday at noon to be precise.

Fortunately, Jennifer has help in the form of a new fellow foundling, Tiger Prawns, and her faithful Quarkbeast (I won’t tell you much about the Quarkbeast because it would spoil your enjoyment of some of the funniest bits of the book).

The Last Dragonslayer reminds us all of the magical joy of reading.

The One and Only Ivan, by Katherine Applegate

Some books on this list aren’t afraid of making you think in between all the magic and humour. Ivan is a pretty easygoing gorilla.

He lives at the Exit 8 Big Top Mall and Video Arcade and has gotten used to being gawked at by the humans on the other side of his glass domain. He’s more interested in art and the TV shows he’s watched that week.

But then he meets Ruby, a baby elephant stolen from her family. Her arrival causes Ivan to start questioning everything about his life and start making a change, for the better he hopes.

The One and Only Ivan will make you laugh out loud. Be warned though, it will likely make you cry too. Through Ivan’s first-person narration, the reader is lovingly introduced to a story of friendship, heartbreak and hope.

If you don’t like animal stories, then feel free to steer clear. Otherwise, I thoroughly recommend The One and Only Ivan.

The fourth book in the Abhorsen series doesn’t require you to have read the first three. The first three might give you more context of the world and characters of Belisaere, but you can enjoy Clariel without knowing about them beforehand.

Many books on this list are often interconnected stories that can be read separately or as part of a longer series. In Clariel, we follow sixteen-year-old Clariel who is trying to adjust to a new life in the city of Belisaere.

Used to living in the forests of Estwael, Clariel is confused by the plans, plots and stupid demands of her parents, her maid and even the sinister Guildmaster Kilp. Then a dangerous Free Magic creature is discovered, the city is thrown into more chaos, but for Clariel, it represents a chance to prove herself and perhaps escape the hated city.

But things don’t always go according to plan. Clariel will resonate with any reader whose parents have ignored their own wishes, moved them around, and made them feel like they have no control over their own life.

Yet, you might also empathise with Clariel’s parents’ POV as Clariel begins to build her strength, overcome her social anxiety and grow. This is a fabulous read for any fan of Sophie and Howl.

Kiki’s Delivery Service is like the smell of spring in the morning. Kiki herself is a witch, but she is much like any young teenager at thirteen. Kiki flies to the seaside village of Koriko, determined to fulfill the witch’s tradition of living in a new town and making it home for a year.

Overconfidence and awkwardness are Kiki’s challenges. There is no monster. There is no epic quest. There is just Kiki trying her best to gain the trust of the locals as she learns that everyday life is a magic all of its own.

There are many books similiar to Howl’s Moving Castle that choose a collective storytelling that anyone can relate to.

The House in the Cerulean Sea, by T.J. Klune

Books like Howl’s Moving Castle aren’t afraid to examine the human fear of getting older. Having recently entered my early forties, Linus Baker is a character I can empathise with.

In The House in the Cerulean Sea, Linus leads a quiet and solitary life in a tiny house. He is a caseworker for the Department in Charge of Magical Youths, but you instantly feel his job is like a millstone around his neck.

At first, it seems like Linus has a rod shoved firmly up his rear end, but when he is forced to stay in a house in the middle of the cerulean sea and assess children deemed to be especially dangerous, something opens up in his heart.

Every belief Linus has is challenged. All the rules he has adhered to his whole life, are thrown into question.

This isn’t just a book for children. This is a book for any adult approaching middle age; a book for anyone willing to look deep inside and wonder if there is more to life than what we’ve been told to do.

This is How You Lose the Time War, by Amal El-Mohtar and Max Gladstone

Love stories are often sniggered at, but Howl’s Moving Castle and books like it are filled with them. Throw in time travel and pen pals, and you arrive at This is How You Lose the Time War.

Two women, on the opposite sides of a war being waged through time itself, develop a connection via a series of letters and poems. Their growing intimacy is a problem though as they both have a war to fight. Will true love win out, or will the harsh brutality of war snatch it all away?

The prose for this story might be a struggle for some, but if you enjoy poems, letters and vignettes, then This is How You Lose the Time War is the speculative story for you.

Tuesdays at the Castle, by Jessica Day George

Landing firmly back in the realm of children’s fiction comes Tuesdays at the Castle. Taking a note out of the Wynne Jones playbook, Castle Glower is as magical as Howl’s own castle.

Tuesdays are when the castle adds a new room, much to the delight of Princess Celie who takes the time to map out the new additions when they come. Celie must do more than map rooms though when her parents are ambushed and disappear.

Armed with her knowledge of the castle’s twists and turns, it’s up to Celie to protect her home and save her parents.

What really makes this book stand out from the crowd is how Castle Glower itself is a character in the story. The castle has its own opinions and ways of doing things, even going so far as intervening in people’s love lives.

Books like Howl’s Moving Castle have a way of reminding you that escape from the world is often just a page turn away. Tuesdays at the Castle is one of those books.

Something Wicked This Way Comes, by Ray Bradbury

Known more for his speculative science fiction than for his young adult work, Ray Bradbury’s Something Wicked This Way Comes is still a dark delight to read.

Books similiar to Howl’s Moving Castle aren’t afraid to dip their toes in the dark pool of horror.

Ladies and gentleman, prepare yourselves, for the show is about to start!

Welcome to Cooger & Dark’s Pandemonium Shadow Show, just arrived in Green Town, Illinois. We’re here to destroy your lives with our dark and sinister mysteries. The siren call of the carnival beckons the whole town into the carnival with promises of eternal youth and more.

Mr Dark is one of literature’s great villains; never one-note and with more than a shade or grey about him. Will and Jim are our eyes and ears in this story and their friendship is as believable and as fragile as any young friendship you see with children today. Well worth a read.

Howl’s Moving Castle remains one of the magical greats of young adult fiction. There are many similar titles. The books we have mentioned are just a few that can be found.

Are you looking for more books like Howl’s Moving Castle? Have any recommendations that didn’t make the list? Let us know in the comments! 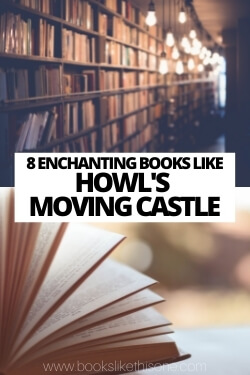