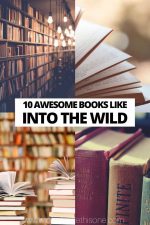 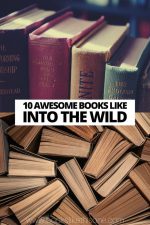 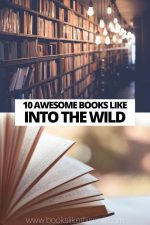 Into The Wild by Jon Krakauer is an international bestseller that was originally written in 1996 and was produced into a feature film directed by Sean Penn in 2007. It follows the true story of Christopher McCandless, a college graduate who donated his college fund and began travelling around the USA. His journey took him to Alaska where he aimed to live off the land but, unfortunately, passed away.

Into The Wild is a favourite amongst travellers around the world who can relate to the protagonist’s desire to give up material possessions and are also enthralled by his attempts to survive off the natural land. These ten books like Into The Wild share similar characteristics with the Jon Krakauer book and are a must-read if you were a fan of either the Into the Wild book or movie!

Into Thin Air by Jon Krakauer

Similarly to some of our other book recommendations like The Kite Runner or Looking for Alaska, when searching for another book like one of your favourites, it’s always best to start with other books written by the same author! Therefore, if you’re looking for more books like Into The Wild then Into Thin Air by Jon Krakauer is a great place to start!

Into Thin Air is Krakauer’s personal account of his attempt to climb Mount Everest during the fatal 1996 climbing season. His book explores some of the factors that led to the 8 deaths that occurred on Mount Everest that year and the potential impact that climbers’ drive to summit the mountain has on safety precautions. Despite receiving a lot of criticism from other people that were involved, Into Thin Air is a fantastic read for fans of Krakauer’s writing style and a fascinating insight into the commercialism of climbing Mount Everest.

Wild: From Lost to Found on the Pacific Crest Trail by Cheryl Strayed

Wild by Cheryl Strayed is a must-read for people searching for more books like Into The Wild due to their interest in reading about self-discovery journeys that occur during long term travelling.

Wild follows the true story of how Cheryl Strayed hiked solo across the Pacific Crest Trail with no previous hiking or outdoor experience. She was motivated to undertake the hike after a period of drug abuse that began after the death of loved ones. The book flashes between her undertaking the hike and stories from her past.

The story is fantastically told and does a great job of covering both the physical challenges of undertaking such a long hike as well as how Strayed dealt with her personal grief and struggles and how the trail helped her move on. Wild was also made into an award-winning movie in 2014 starring Reese Witherspoon as Cheryl Strayed.

For more book recommendations, browse our books like Wild article!

A Walk in the Woods: Rediscovering America on the Appalachian Trail by Bill Bryson

For fans of books like Into the Wild who particularly enjoyed the survival elements of the story, then A Walk in the Woods is a great next read! Bill Bryson’s autobiographic book shares his real-life experience of hiking The Appalachian Trail. It delves into his own experience while hiking as well as providing readers with a lot of detail about the history of the trail.

For those who are familiar with some of Bill Bryson’s work, it should come as no surprise that this book is written in a much more light-hearted tone compared to Into the Wild and was actually rated as one of the funniest travel books ever written by CNN.

The Beach by Alex Garland

For readers looking to find more books like Into the Wild due to the protagonist’s desire to give up material possessions and travel off the beaten path then The Beach by Alex Garland is a must-read.

The Beach has a cult following amongst backpackers around the world and tells the fictional story of Richard, a British backpacker, who finds a map to a hidden island in Thailand and then uncovers an untouched paradise where a group of backpackers live disconnected from the rest of the world. The story then follows the power struggles that occur between individuals on the island and the relationship with locals on the island and how their idyllic world begins to fall apart.

On the Road by Jack Kerouac

On the Road is an American classic that has inspired many travellers to hit the road and is a must-read for people searching for more books like Into the Wild.

The novel was originally published in 1957 and follows the story of Sal Paradise and Dean Moriarty as they road trip in the US post-WWII with a particular focus on the generational changes that were occurring in that era including the impact of jazz music and drug use. The elements of the story that focuses on the character’s rejection of society will particularly resonate with readers who enjoyed Into The Wild.

On the Road was written as a fictional story but is predominately based on Kerouac’s life and is considered one of the defining pieces of work of the Beat Generation. It was also chosen by Time Magazine in their Top 100 Best Novels List.

Man’s Search for Meaning by Viktor Frankl explores many common themes with Into the Wild despite it obviously being in completely different circumstances. The book was published in 1946, just after the end of WWII, and is autobiographically based on Frankl’s experiences in a Nazi concentration camp.

It focuses on the day to day life in the camp and how the human mind can survive in such circumstances. The second part of the book then delves into psychological theories that Frankl developed off the back of his time in the concentration camp.

If you’re searching for more books like Into the Wild because you enjoyed the philosophical elements of the writing then Man’s Search for Meaning is a must-read. It is undoubtedly one of the most influential books I have ever read and one that I continue to re-read and learn new perspectives from.

Touching the Void by Joe Simpson

Touching the Void is the fantastic true story of Simpson’s and his partner Simon Yates’ successful summit of Siula Grande in Peru. It focuses on their nearly fatal descent when Simpson slipped and broke his leg resulting in them having to spend several days trying to descend the mountain while Simpson was injured and with diminishing food and water supplies.

Touching the Void is a classic amongst lovers of mountaineering stories and is a great read for fans of Into the Wild who enjoyed the survival aspects of the story. The book was also made into a documentary in 2003 and was included in PBS’s list of best documentaries of all time.

Walking the Amazon: 860 Days. One Step at a Time. by Ed Stafford

Walking the Amazon covers the story of Ed Stafford’s historical journey through the Amazon on foot – the first of its kind in history. Stafford started the journey in April 2008 where he searched for the true source of the Amazon before spending close to 2.5 years walking through the jungle on foot.

The journey was an absolutely remarkable feat and Stafford writes brilliantly about both the physical challenges of being required to survive from the land and also the mental difficulties of undertaking such a journey and how his thought process evolved throughout the 2.5 years. It also touches on the impact of deforestation and local tribes in the area.

Stafford’s trek is undoubtedly one of the most remarkable in human history and it was also documented by Discovery Channel as a documentary.

Between A Rock and A Hard Place by Aron Ralston

Between A Rock and A Hard Place is the gripping true story of how Aron Ralston had his arm trapped under a rock while hiking in the Utah Desert. After spending a number of days trapped, he realises that the only way to get free is for him to amputate his arm using a blunt tool that he was hiking with.

Ralston discusses the mental challenges of being trapped and how he dealt with it as well as the book showing how his mother tried to find him and what led him to his desire for an adventurous lifestyle. Ralston’s story gained mainstream popularity when it was made into the award-winning movie, 127 Hours, starring James Franco.

The Lost City of Z: A Tale of Deadly Obsession in the Amazon by David Grann

The Lost City of Z published in 2009 is a non-fiction book that traces the expedition of Percy Fawcett, a British explorer, who disappeared in the 1920s when searching for the mythical city in the Amazon. Many explorers over the years who have gone looking for evidence of how Fawcett disappeared with Grann being among them.

Grann’s book uncovers potential reasons for what might have happened to Fawcett and has many parallels for people looking for more books like Into the Wild. In particular, the obsession to do with the Amazon shares many similarities with McCandless’ obsession with Alaska in Into the Wild.

Into the Wild is one of my favourite travel books of all time and luckily there are plenty of other similar books for readers to enjoy if they are a fan of Krakauer’s writing.

What are your favourite books like Into the Wild? Let us know in the comments below! 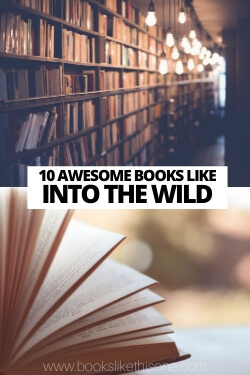