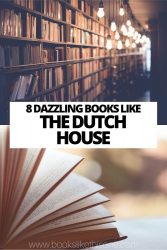 Are you looking for your next character-driven novel? Then look no further than this list of books like The Dutch House, Ann Patchett’s 2020 Pulitzer nominated thoughtful, intuitive, compulsive, splendid novel.

At the end of the Second World War, Cyril Conroy and his family are propelled from penury to immense wealth thanks in part to luck and an astute investment opportunity. As a surprise for his wife, Cyril purchases The Dutch House — a lavish estate on the outskirts of suburban Philadelphia.

Unfortunately, this is where the Conroy family’s luck runs out. As in a dark fairytale, The Dutch House brings about the family’s undoing.

Set across five decades and told through Danny Conroy’s eyes we follow his family’s rise to the top and their tumble back down to the bottom as he and his sister Maeve soon have to navigate the same poverty their parents did with only each other to rely on.

The characters in books like The Dutch House are flawed, they can frustrate and irritate but they are also relatable, expertly portrayed, and what make these narratives so remarkable — prepare to be dazzled by the books like it below.

The Vanishing Half, by Brit Bennett

Stella and Desiree grew up in Mallard, a small Southern black community, so small it is often missed off maps, when they turned sixteen they decide to run away together to see what the wider world has to offer.

To escape her abusive husband, Desiree returns to Mallard years later with a daughter of her own while Stella, passing for a white woman, lives in Los Angeles with her husband who knows nothing of her past or her true racial identity.

Despite being identical and straddling the line of colour, the twins have lived very different lives but no matter how hard Stella tries to hide and ignore her past, the twins’ fates, and the fates of their families, are tightly intertwined.

If you like The Dutch House for the exploration into the way ones past shapes and influences ones future decisions then you will be captivated by The Vanishing Half too.

Have you already read this moving novel? Check out our list of books like The Vanishing Half!

There comes a time in every parent and child relationship when the roles get reversed and the child becomes the carer, but how is this navigated when the parent never really cared for the child? Simply put this is the premise of our next dazzling book, Avni Doshi’s Booker Prize-nominated novel Burnt Sugar.

Tara lived a wild life in her youth; careless, rebellious and reckless. Abandoning her loveless marriage she joined an ashram, begged on the streets and chased a homeless artist around the country all with her young daughter, Antara, in tow little thinking how this carefree lifestyle would impact her child.

Now Tara is getting confused, forgetting things, leaving the gas on, starting fires and it falls on Antara to take care of her. Antara reflects on her relationship with her mother, helping her remember in one breath hoping she forgets with another.

In a beautifully written, visceral narrative set in India, Doshi dissects the sticky bond between mother and daughter and between memory and myth. Burnt Sugar is another exploration on toxic familial relationships that fans of books like The Dutch House are sure to enjoy.

Such a Fun Age, by Kiley Reid

Our next novel like The Dutch House is another which has quite rightly received great acclaim, it is Kiley Reid’s searing debut Such a Fun Age.

Alix Chamberlain and Emira Tucker couldn’t be more different. Alix is confident and successful, a businesswoman who has forged a brand to show other women how to achieve the same. Emira is broke, aimless and babysitting as a way to make ends meet as she has no idea what to do with her life.

One day when babysitting for Alix, Emira is accused of having kidnapped Alix’s child because she is black and the child is white. In an age of social media, the accusation is filmed leaving both women mortified.

Well-intentioned Alix resolves to make things right little realising the video, and someone in particular who has seen it, will bring about their downfall.

We are back in India for our next book similar to The Dutch House with Arundhati Roy’s truly amazing, Booker Prize-winning novel The God of Small Things.

Twins Rahel and Estha are close, they feel the same things, laugh at each other’s dreams, sense each other’s presence behind closed doors and can communicate with just a look. There is no I or My, only We and Us. Even when tragedy strikes and their cousin accidentally drowns and the twins say “Yes” when they should have said “No” and are consequently separated, their bond doesn’t weaken.

Set across opposing narratives detailing the days leading up to the tragedy and the effect it has on them in the present day, forever haunted the twins drift through adult life finding it slightly easier when they are together.

Roy’s prose is alive with childish magic softening the heartache and distress of the plot, she is a lyric writer dissecting not only familial ties and duty but cultural and political views, The God of Small Things is a novel that should not go unread.

Another novel depicting complicated familial ties, the weight of keeping secrets, lies and a past that’s impossible to outrun is Celeste Ng’s 2017 novel Little Fires Everywhere.

Shaker Heights is a picture-perfect suburb in Cleveland and Elena Richardson and her family are the kind of picture-perfect family that live there; a wealthy family, who play by the rules and are active in the community. Then single mother Mia and her daughter Pearl arrive and Shaker Heights’ picture perfectness is thrown into disarray.

For Mia doesn’t play by the rules, she doesn’t lay roots, she moves around and she is secretive and guarded about her past. It is this secrecy and aloofness which makes Mia and Pearl so fascinating to the Richardson children; even Elena is curious about them.

When a friend of Elena’s get caught in a custody battle in their attempt to adopt a Chinese-American baby, and Elena and Mia are on opposing sides, this curiosity reaches new heights and threatens to destroy everything each mother has worked so hard for.

A compelling read, Little Fires Everywhere is a great next choice for readers of books like The Dutch House.

In our next novel like The Dutch House, we are transported to the marshlands of North Carolina in Delia Owens first piece of fiction; it is the haunting Where the Crawdads Sing.

Kya has been called many things, Marsh Girl, Filth, Nasty, Murderer all of which are titles that have stuck but which, if any, are true?

Kya is the youngest of 5 children, growing up motherless and pretty much siblingless thanks to her drunk and abusive father. One day he goes out and never comes back leaving Kya alone with nothing but the birds and animals of the marshland for company.

With the help of very few friends, Kya finds ways to survive, learning from the land and keeping herself to herself. But when the town’s star quarterback and playboy is found dead, Kya is the prime suspect in the police’s line of enquiry. How can the town outsider prove their innocence?

A true coming of age story, as we read we evolve with Kya, never truly knowing her until the very end, Where the Crawdads Sing is an impeccable read.

Have you already read this bestseller? Check out our list of books like Where the Crawdads Sing!

The Family Fang, by Kevin Wilson

If it is the exploration into dysfunctional families that has you on the hunt for more novels like The Dutch House then our next book The Family Fang will be the perfect next read for you.

Caleb and Camille Fang are performance artists. They call it art but their children, Buster and Annie, strongly disagree. Forced to take part in their parents’ acts, both Annie and Buster have found it difficult to build normal lives out of the confines of their strange familial bubble.

Therefore it isn’t a surprise when their lives come crashing down and, reluctantly, home is the only place left they can go. And it is back at home where they discover Camille and Caleb planning their final performance hoping their children will participate one last time.

Kevin Wilson’s impeccable portrayal of siblings Buster and Annie and their draw on one another is reminiscent of Patchett’s Danny and Maeve. Prepare to question whether there is anything more important than family with The Family Fang.

Ann Patchett is a phenomenal writer, I couldn’t put together a list of books like The Dutch House, her 8th book of fiction, without an appearance of at least one of her other books. I have chosen Commonwealth, her 2016 novel which explores family, chance, inspiration, interpretation, stories and their ownership.

At Franny Keating’s christening party one Sunday afternoon, two families are dissolved and a new blended family is formed. This is because Bert Cousins kisses Franny’s mother setting off the breakdown of their marriages.

Spanning decades, similar to The Dutch House, we discover how this chance reencounter affects the four parents and six children involved, from the immediate repercussions to those many years down the line.

As heartbreaking as it is humorous, Patchett expertly navigates the duty and responsibility which binds her characters together. If The Dutch House has made you a fan of Patchett, then make sure you add Commonwealth to your reading list.

There you have it, a list of books like The Dutch House, there are many I could have picked but feel the novels above are equally enthralling with complex multifaceted characters to dissect, enjoy!

Are you looking for more books like The Dutch House? Have any recommendations that didn’t make the list? Let us know in the comments! 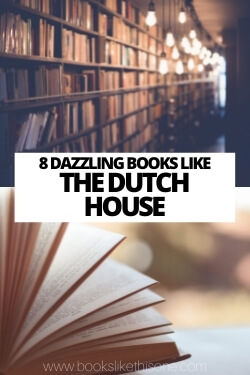