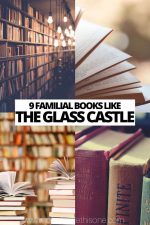 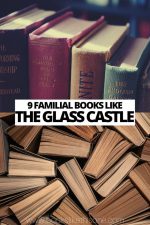 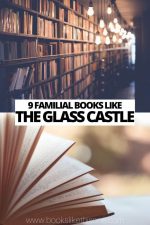 We all think our families are crazy, dysfunctional and flawed but in the case of books like The Glass Castle, these descriptions barely scrape the surface. Jeanette Walls recounts events from her unconventional, nomadic childhood spent touring the mountains and desert towns of the American Southwest led by her eccentric and at times destructive parents in her memoir The Glass Castle.

Walls and her siblings soon craved stability, but it seemed that every attempt at a ‘normal’ life was destined to be a disaster until they refused to accept it anymore. Together they made a plan to move away and start a better life leaving behind the dysfunction, depression and danger that constantly surrounded their parents.

But despite the hurt, betrayals and letdowns, Walls writes with such captivating warmth and tenderness about her past and her parents that it’s no surprise people find themselves looking for more books like The Glass Castle. The list below is a mixture of fiction and memoir depicting heart-breaking, humorous, tragic, unsavoury, inspiring, harrowing and gripping tales about different familial relationships.

The Liars’ Club, by Mary Karr

Mary Karr’s moving memoir took the world by storm upon its publication in 1995 and has perhaps been an inspiration to some of the other memoirs on this list of books like The Glass Castle, as it’s often considered that Karr breathed new life into the genre and rewrote the form.

The Liars’ Club tells the story of Karr’s troubled childhood; her hard-drinking father, her mother’s ailing mental health issues and her own experiences of death, despair and abuse.

The memoir is split into three sections which describe different parts of her childhood and different locations; Karr takes us on a journey through Texas into her parents’ turbulent marriage then out to Colorado with her mother’s new leering boyfriend then back to Texas again to help care for her dying father.

Karr is unashamedly honest, unsentimental in details and darkly comic in her recollection of events which is what has made The Liars’ Club such an enduring memoir and compulsive page-turner.

Paddy Clarke Ha Ha Ha is the first book of fiction on the list and won author Roddy Doyle the Booker Prize in 1993. A heartbreaking story told through the eyes of ten-year-old Patrick ‘Paddy’ Clarke detailing the break down of his parent’s marriage and the devastating effect this has on him.

Set in Ireland and written in a playful Irish dialect, the story is told in vignettes which don’t fit together sequentially but slowly reveal the demise of the Clarke family’s domestic bliss.

There are snippets of fun-loving Paddy ruling the streets of Barrytown with his friends playing cowboys and writing on pavements with chalk paired with him staying up all night to keep his parents safe as they argue, willing them to stop. It is an unconventional coming of age story as Paddy does not choose his path to maturity the responsibility is forced upon him once his dad leaves and he becomes the man of the house.

I studied Paddy Clarke Ha Ha Ha at school and have read it several times since; it is still a firm favourite of mine and will be for anyone looking for novels similar to The Glass Castle.

The story follows the fates of Mia and Pearl as they become intertwined with the wealthy and successful Richardson family who all feel an enamoured pull towards them; Journalist mother Elena, Lawyer father Bill and their four picture-perfect children.

But when a local legal battle over an adoption ensues and divides the town Mia and Elena end up on opposing sides, things take a nasty turn causing Elena to delve deep into Mia’s past which reveals a secret with devastating repercussions.

Little Fires Everywhere is another gripping familial tale which sucks you into the lives of these women, feeling the weight of their secrets and the lengths they’ll go to for the safety and love of their children. It makes a truly thrilling fictional read for fans of books like The Glass Castle.

At the heart of a lot of David Sedaris’ work is his family which provides readers with endless streams of tears from both laughter and sadness, Naked is one of Sedaris’ many books of essays which chronicles different events in his life.

Published in 1997, Naked is his second book and details some snippets and anecdotes from his unusual upbringing in North Carolina with his five siblings. Included is his years spent battling addiction, coming to terms with his sexuality and the sad passing of his mother along with hilarious stories about visiting a nudist colony and posing as a newly wedded couple with a quadriplegic woman while trying to hitchhike.

Sedaris has a unique ability to combine passages of pure joy like his sister’s wedding with passages of pure sorrow like the looming shadow of death surrounding his mother’s gruelling battle with cancer. Sedaris has an incomparable and unique outlook on events, he is darkly comic, witty and takes no prisoners.

A fresh voice and one of my personal favourites, Naked is an affecting read for anyone looking for more familial books similar to The Glass Castle.

As I Lay Dying, by William Faulkner

As with a lot of books like The Glass Castle, we see the ever-changing moods experienced within turbulent family life and William Faulkner’s classic As I Lay Dying is no different, ranging from moods of ultimate darkness to comedy followed by incredible sadness.

Narrated in turn by different members of the Burden family, the story follows their harrowing journey travelling across the Mississippi countryside to bury their mother and wife Addie, whose dying wish was to be buried in her hometown.

A journey that involves arrests, nearly losing the coffin and body, thievery, hunger and broken bones, Faulkner adopts a stream of consciousness style of writing, characterising the different family members through the eyes of others.

As I Lay Dying is considered one of the most influential novels in American literature and is consistently ranked amongst the best novels of the 20th Century and there is no difficulty to see why.

Flowers in the Attic, by V.C. Andrews

If you like The Glass Castle for the aspects of the Walls siblings pulling together for the better, then you are sure to enjoy Flowers in the Attic for this too. V.C. Andrews’ 1979 gothic novel is a harrowing portrayal of abuse disguised in a veil of protection and follows the Dollanganger family’s return to their mothers estranged parent’s estate after the untimely death of their father.

Their arrival unwanted, the four children are shunned into the attic where they are told to remain hidden from their grandfather until relationships are repaired. A few weeks hidden turns into agonising years of imprisonment as the four children are starved of food, sunlight and what seems like any chance of freedom.

As their mother’s visits become less and less frequent and their grandmother’s torment increases, the children realise they’ll have to pull together to find an escape of their own. Flowers in the Attic is a truly disturbing story which is impossible to tear yourself away from.

All Over But The Shoutin’, by Rick Bragg

Rick Bragg is another talented writer who, like Walls, writes tenderly and compassionately about his adverse and impoverished beginnings in his memoir All Over But The Shoutin’.

Bragg shares stories from his childhood, of his mother’s strength and courage in protecting him and his brothers from her alcoholic husband’s abuse, by taking the brunt and burden of his violent outbursts herself. But also how she encouraged him and believed in him to pursue his dreams, a belief that paid off as Bragg’s undeniable talent and insight earned him a Pulitzer Prize in 1996 for feature writing.

Bragg’s story is one of inspiration; not just his rise from adversity but his mother’s sheer determination making sure that he and his brothers would not suffer the same effects of poverty and ignorance that she had to endure. All Over But The Shoutin’ is another touching memoir which readers looking for books similar to The Glass Castle are sure to be captivated by.

The Family Fang, by Kevin Wilson

Kevin Wilson’s novel The Family Fang is another fictional example of some rather unorthodox parents in the form of performance artists Camille and Caleb Fang. The story follows their long-suffering children Annie and Buster who had to unwillingly star in their parent’s performance art ever since they can remember.

But now they are grown-ups and both struggle to adjust to life in the normal world, the world outside their parents’ strange theatrical existence. Annie is an actress and Buster a journalist they are doing ok until for one reason or another their lives are turned upside down and they are forced to return to the madness of the family nest to recoup.

A return is much to the delight of Mr and Mrs Fang who wants to enlist them in one last act, raising the question of what is ultimately more important: their art or their family. The parents in The Family Fang explore a different sort of dysfunction compared with some of the other parents featuring on this list of novels like The Glass Castle yet it is an equally enjoyable read.

Another Pulitzer Prize winner to grace the list, this time from renowned memoirist Frank McCourt with the moving account of his childhood in his first book Angela’s Ashes, which sparked a string of memoirs following its release.

The titular Angela refers to McCourt’s mother who, following the death of three of her children, McCourt’s siblings, gradually slips into despair and depression leaving her remaining children to suffer at the hands of their abusive, unreliable drunk father Malachy.

Set in Ireland when the Great Depression had firmly taken hold, McCourt’s is a story with glimmers of hope and tremendous imagination amidst a period of familial and cultural misery. Despite this harrowing start to life, McCourt tells his devastating story with such tenderness, kindness and forgiveness which in itself is highly commendable given the way his father treated him and the loss he endured at such a young age.

Therefore, if you like that aspect of Walls’ writing in The Glass Castle then I am sure you will be utterly moved by McCourt’s unfaltering eloquence in Angela’s Ashes too.

Books like The Glass Castle aren’t in short supply, they are often an emotional rollercoaster to read but are indeed worth it to see how the authors have turned their lives around or used their upbringings to create art.

Hopefully, some of the families which feature on this list will make you feel a little happier about your own and perhaps invite you to view them differently.

Are you looking for more books like The Glass Castle? Have any more recommendations that didn’t make the list? Let us know in the comments! 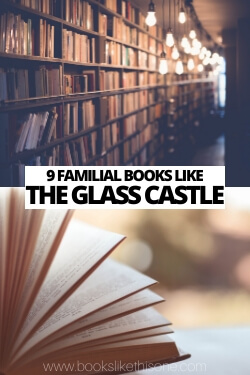