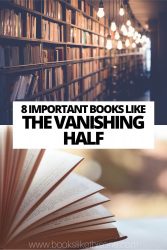 Brit Bennett’s second novel has taken the world by storm, reaching number one on the New York Times fiction bestsellers list, it is a book I kept seeing all over social media and one I was looking forward to reading to see what all the hype was about – the verdict? Totally worth it.

At face value, the novel is about twins Desiree and Stella Vignes who run away from the tiny provincial town they grew up in — so tiny it can’t even be found on a map — and their lives over the years that follow. Told across alternating time periods revealing what happened to each twin once they separated and their differing experiences living and growing in America between the 1960s and ’80s.

The novel, however, is about so much more. Bennett expertly explores many, many pertinent themes; race, racism, white privilege, secrets and shaping one’s identity to name a few. The books like The Vanishing Half which follow all dissect similarly complex themes woven between equally engrossing plots.

Brit Bennett is said to have drawn inspiration from our next book when working on The Vanishing Half, it is Passing by the iconic Nella Larsen. Set in New York in the 1920s, the novel centres around the reunion of two biracial childhood friends whose lives have taken very different paths.

There’s Irene Redfield who, along with her physician husband, had become prominent figures in Harlem’s affluent Black community thanks to her charity balls. And there’s Clare Kendry, married to a white and adherently racist man, passing herself as a white woman.

When the pair reunite and glance into the life the other is leading, the life they could have led, everything they have done, every decision they have made, their beliefs, are all thrown into a state of flux.

Passing is an exquisitely written journey into topics of race, class, community and identity. Though written some 90 years before Bennett’s novel and portraying a different moment in history, the novel is a similarly compelling story of two women who cross the line of colour, a perfect next read for fans of books like The Vanishing Half.

Homegoing by Yea Gyasi is the first book of many on this list of novels like The Vanishing Half which explores familial ties, the paths we take and the difference of experience. Set in 18th-century Ghana, two half-sisters — Effia and Esi — are born into two different villages, each unbeknown to the other.

Effia marries an Englishman and lives a comfortable life in Cape Coast Castle and enjoys palatial surroundings while her sister Esi is imprisoned in the dungeons beneath about to be sold into slavery.

The novel unravels the threads of each Effia and Esi’s lives across the decades, we follow Effia and her descendants through Ghanaian warfare, wrestling with the slave trade and colonisation by the British. We follow Esi and her descendants to America and the plantations, the Civil War, coal mines all the way to the jazz age of twentieth-century Harlem.

Gyasi wrote Homegoing when she was just 26-years-old, which utterly astounds me she has such a talent. It is not just a novel but a reading experience watching these two women being moulded by different historical forces well beyond anyone’s control.

If it is the intense relationship between Stella and Desiree’s daughters that has you looking for your next novel similar to The Vanishing Half then look no further than our next book, Silver Sparrow by Tayari Jones.

Set during the 1980s in a middle-class neighbourhood in Atlanta, the novel centres around James Witherspoon – husband, father, bigamist. James has two families, one public and one he keeps secret but, like any secret, it won’t stay hidden for long.

It is when the daughters of each of his family’s become friends that the worlds James had worked so hard to deceitfully build come crashing down, shattering all the illusions.

In Silver Sparrow, Jones has deftly created some convincing fragile and flawed characters, as readers we get sucked into their backstories, their reasoning and impulsive rationale and much like The Vanishing Half it is a novel I found impossible to put down because of this.

The Wedding, by Dorothy West

Our next novel like The Vanishing Half, Dorothy West’s last, also dissects class and skin colour in astounding and thought-provoking ways. Written in 1995 and set during the 1950s, The Wedding offers readers an intimate glimpse into the African American middle class.

The Coles are a prominent family within the Oval, a proud community made up of the brightest of the East Coast’s black bourgeoisie. Shelby Coles is soon to be married. There were many eligible men Shelby could have chosen who were of the “right colour” and held the “right professions.”

Instead, Shelby falls for a white jazz musician from New York called Meade Wyler. This impending union forces older members of the Oval to wrestle with and address the imminent changes facing their community.

The Wedding, I am sure also offered Bennett some food for thought when planning her novel, West’s portrayal of a family attempting to break free from such ingrained prejudices concerning race and class is compelling.

My Sister, the Serial Killer, by Oyinkan Braithwaite

Darkly comic, our next book similar to The Vanishing Half explores familial duty and how, two sisters from the same family can turn out so differently it is Oykinan Braithwaite’s debut My Sister, the Serial Killer.

Most elder sister’s know what to do when their younger sibling calls them in distress, for Korede she knows to grab some bleach and the rubber gloves when her younger sister Ayoola calls.

Allegedly in self-defence, Ayoola has so far killed three of her boyfriends, and dutifully Korede has helped cover up her crimes, scrubbing bloodstains and burying bodies. Korede has contemplated reporting Ayoola to the police but blood is thicker than water right?

It is until Ayoola starts pursuing a Doctor who Korode not only works alongside as a nurse but is also in love with. Korode soon has to choose between her sister, her heart and what is right.

Set again in Nigeria, My Sister, the Serial Killer is one of the lighter reads on this list but one that still expertly explores our ties to our siblings.

Our next book like The Vanishing Half explores London’s racial and societal past by a writer and thinker who often blows me away, it is Zadie Smith and White Teeth.

Expansively written the novel focuses on the lives of two World War II veterans who become unlikely friends. There’s Archie Jones whose marriage to Clara, a Jamaican lady many years his junior, has recharged his zest for life together they have a very headstrong daughter called Irie a name which ironically means ‘no problem’ in Jamaican.

And then there’s Samad Iqbal who is married by arrangement later in life, a union which produces twin boys who grow up rebelling against the paths their father tries to steer them towards.

Rich in detail, Smith charts London’s cultural past and future through the lives of these characters, reveling in the hilarity of modern existence and the intricacies of daily life, White Teeth is a brilliant novel which, much like The Vanishing Half, encapsulates the generational, national and sexual mindsets of the period.

Half of a Yellow Sun, by Chimamanda Ngozi Adichie

From the rich historical tapestry of London in the aforementioned White Teeth to Nigeria’s in our next novel, it is Chimamanda Ngozi Adichie’s haunting novel Half of a Yellow Sun.

The novel follows three characters who have all been affected by the Nigerian Civil War during the years between 1967 and 1970. There is 13-year-old Ugwu, employed by a university professor as his houseboy, Olanna, the professor’s beautiful mistress, and Richard, a young Englishman captivated by Olanna’s equally beautiful twin sister.

Dissecting one’s cultural and moral responsibility, the end of colonialism, class and race Adichie has written one of the most dramatic and powerfully emotive novels about modern Africa that I have ever read, Half of the Yellow Sun is a devastatingly brilliant read, the perfect novel like The Vanishing Half.

My Name is Leon, by Kit de Waal

Kit de Waal previously worked in family law she sat on adoption panels and advised social services, she draws on these experiences in her heartbreaking and hilarious debut novel, My Name is Leon.

Leon is nine-years-old and is the super proud big brother to baby Jake, at the start of the novel they are quickly placed into foster care together as their mother Carol struggles to cope.

As Jake is a baby, and white, he is adopted.

As Leon is neither of those things he is not.

Told a lot from Leon’s perspective, we follow his journey through the care system and how he comes to terms with being left behind by everyone he loves all while trying to find his brother.

Heartbreaking and at times hilarious de Waal is another author like Bennett who expertly portrays the difference of experience navigating this world as a white person and as a black person in My Name is Leon, another fantastic book like The Vanishing Half.

Family ties, race, inequality, prejudice, identity, cultural history – books like The Vanishing Half sure do pack a gut punch! Heartbreaking, heartwarming, uncomfortable, thought provoking, compelling, important these are just a few words to describe the novels above which chronicle the black experience.

Are you looking for more books like The Vanishing Half? Have any recommendations that didn’t make the list? Let us know in the comments! 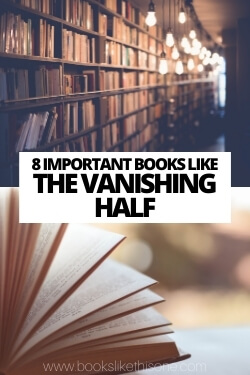