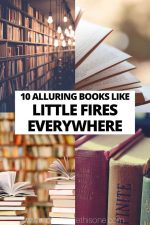 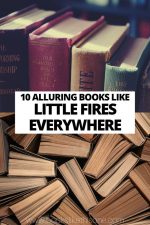 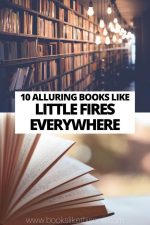 Celeste Ng’s Little Fires Everywhere captured the imaginations of people so totally that it is now in the production stages of becoming a mini-series. When mother and daughter Mia and Pearl move to the suburbs of Shaker Heights, they instantly capture the attention of the wealthy Richardson family. Each Richardson becomes entangled with Mia and her daughter in one way or another, to the point of obsession, and it is this obsession that each of the below books like Little Fires Everywhere explores as well.

The Silent Patient, by Alex Michaelides

Although following completely different story patterns, The Silent Patient and Little Fires Everywhere do have one key concept in common – they both tell the tale of those who become obsessed with others, and the consequences this obsession can have on people.

Theo Faber is a psychotherapist who has found himself unable to stop thinking about Alicia, a woman who six years previously shot her husband point-blank in the face five times. When a job opportunity arises in the facility where Alicia is being treated, Theo jumps at the chance to try and do what no other Doctor has been able to do – get Alicia to speak.

This, as in books like Little Fires Everywhere, follow a familiar pattern, and explores the depths of obsession, that has the reader become almost as obsessed as the protagonists of these novels.

Have you already read this book? Make sure to check out our list of more books like The Silent Patient!

Big Little Lies, an award-winning series, began as a novel about three mothers living in a wealthy area in Australia called Pirriwee Peninsula. The residents, with the exception of Jane, an outcast who has recently moved there with her son Ziggy, are equally wealthy, and their lives from the outset seem perfect.

However, as the novel progresses, just as in books like Little Fires Everywhere, secrets begin to unravel, of affairs to domestic abuse, to a murder, which becomes the centre of the novel. This is a wonderful piece of domestic fiction, like Celeste Ng’s novel, but it incorporates a thrilling aspect that explores the difficult and secretive lives of Jane, Celeste and Madeline, with an explosive finale.

Have you already read this book? Make sure to check out our list of more books like Big Little Lies!

The Girls, by Emma Cline

Following the same theme of obsession, The Girls is about a cult; a comment on the crazed killers of the late 1960s. The novel centres in on Evie Boyd, a fourteen-year-old girl who is tired of her boring life and wealth. She is drawn to the girls she sees hanging around her local park, but mostly the alluring Suzanne, who adopts Evie and shows her the way.

As can be predicted, the novel takes a disconcerting turn, but that this plot twist is predictable takes nothing away from what happens as Evie gets deeper and deeper into the life of the cult. Like in books like Little Fires Everywhere, as Moody and Tripp become obsessed with Pearl and Elena Richardson becomes obsessed with Mia’s backstory, Evie becomes obsessed with Suzanne, allowing her devotion to blind her to what’s truly happening back at the ranch. We, like Evie, have no choice but to delve deeper.

Devotion and Little Fires Everywhere have a lot in common – they both follow the story of strangers invading a family unit and trying to become one with them. As Pearl wishes to embed herself in the Richardson’s glamorous life, nanny Ella is desperate to join the life of her employers, Lonnie and James.

Ella is a broke twenty-something who does as little work as possible to get by, often hoping to be spotted a meal in exchange for sex from random men she meets. When she’s hired as a nanny by Lonnie, she becomes fascinated with Lonnie’s life, and with Lonnie herself. As the pair develop a friendship, Ella is desperate to be more like Lonnie, and with every secret learned, she becomes more implanted in the family unit, at times forgetting who she really is.

Novels like Little Fires Everywhere and Devotion are inescapably alluring and easily digested in a single sitting.

You, by Caroline Kepnes

Most people will have heard of or seen the Netflix series You, starring Penn Badgley, but many won’t realise it was based on a novel by Caroline Kepnes. It hardly seems possible, but the novel is at times much creepier and graphic in portraying Joe Goldberg’s obsession and stalking of Guinevere Beck, who he cannot stop thinking about once she has entered the bookstore he works at in New York for the first time.

More sinister than the obsessions in these previous novels, Joe will stop at nothing to obtain her, with those in her inner circle finding themselves the targets of his jealousy. Books like Little Fires Everywhere portray obsession that is slightly irrational, but perhaps recognisable to the reader, and even relatable.

You takes this a few steps further, showing how quickly an addiction can go wrong, for the one addicted, and those around them.

Tangerine and You are very similar in their deductions about obsession – they both follow individuals who have an object they want contained desperately, these objects both being human.

Alice has moved to the Tangier with her husband for his work in the 1950s – it is discovered early on in the book that she is unstable from past traumas, and these only come more to light with the introduction of Lucy Mason, her college roommate. Alice appears highly distressed by the return of her old friend, in the Tangier of all places, and Lucy is determined to pick up where they left off.

This, as in books like Little Fires Everywhere, uncover the secrets of friends, and what some people are willing to do for those they love.

The Virgin Suicides, by Jeffrey Eugenides

Books like Little Fires Everywhere are all about family – The Virgin Suicides follows a similar pattern, with a group of boys becoming enthralled by the Lisbon sisters, whose notoriety peaks when their youngest sister, Cecilia, first attempts suicide, and weeks later, succeeds in it by impaling herself at a party held at her house.

The boys, who go to the same school as the girls and live in the same neighbourhood, spend hours dissecting the girls’ lives, as their parents keep them locked away in the wake of Cecilia’s death. As in many of the other books on this list, there are those obsessed, and the object of their affection, in this case objects, although the novel focuses particularly on Lux, the youngest after Cecilia.

The reader becomes just as fascinated with the Lisbon sisters, praying that the boys will uncover some secret as to why they’re kept away from the world and why Cecilia took such drastic and violent measures to end her own life. Although more menacing than Little Fires Everywhere, The Virgin Suicides will capture your attention in a much similar way.

Have you already read this book? Make sure to check out our list of more books like The Virgin Suicides!

The second of Moriarty’s novels on this list, Nine Perfect Strangers delves into the families of several of its main characters, examining what keeps us close and what tears us apart.

When nine people join a retreat, they receive much more than they bargained for at Tranquillum House. Their leader, Masha, having escaped death after a heart attack, believes in healing the body and the mind, but what lengths is she willing to go to?

Books like Little Fires Everywhere and Nine Perfect Strangers delves into the family structure, particularly when under significant duress, and both novels race to a thrilling climax.

A Keeper, by Graham Norton

Graham Norton’s second novel, A Keeper, brings us through two timelines, one in the present day, and one set forty years previous, in rural Ireland. This novel explores a mother and daughter relationship, just like Little Fires Everywhere, although it does so in a very different way – in the present Elizabeth is mourning the death of her mother and sets out to begin clearing out her home.

As she does so, she learns about the time just before she would have been born and is shocked to discover a haunting secret that her mother kept from her for her entire life. A twisted tale, with more in common with Little Fires Everywhere than may appear from the outset, Norton portrays his wonderful storytelling once again.

This novel’s primary theme is addiction – sex addiction to be specific. Adele is bored, bored of working for a going-nowhere paper and bored, seemingly, of her husband and young son. The only time she is not bored is when she is trying to find the next person she is to have sex with, with whom she stays in contact through a burner phone.

Always trying to find the initial high of a forbidden hook-up, Adele’s world revolves around sex, with anyone but her adoring husband. A frank and honest depiction of sex addiction, Adele is seductive and as in other books similar to Little Fires Everywhere, the disruption of family due to obsession and longing carries the reader to the final pages before they even realise they’re there.

Little Fires Everywhere and the novels listed above are many things – alluring, tantalising at times and most of all seductive. They appeal to our inner addict, making the us crave the details of these individuals’ lives, loves and aspirations, and the hold they have doesn’t disappear with reading the final sentence of the book.

Are you looking for books similar to Little Fires Everywhere? Have any recommendations that didn’t make the list? Let us know in the comments! 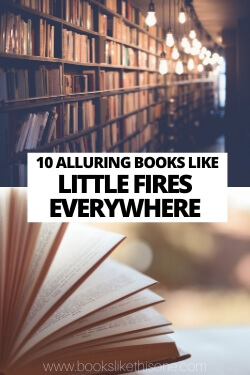