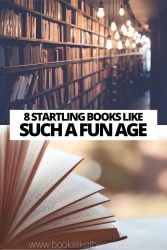 Recently a number of astute books like Such a Fun Age have been released, documenting the experience of black millennials navigating predominantly white environments; the microaggressions, petty prejudices and the “white saviour” complex. Therefore it isn’t surprising that readers are searching for more timely books like it.

Alix Chamberlain is a successful career woman, her feminist blog became so popular that she now empowers other women to achieve as she has. One evening, in the midsts of a family crisis, she calls upon Emira, her African American babysitter, to watch over her toddler Briar.

Emira takes Briar to the local supermarket and is apprehended by security, accused of kidnapping Briar solely because Emira is black and Briar is white. The altercation is filmed, triggering a cataclysmic chain of events for Emira and Alix as a mutual connection emerges, threatening to upend everything.

Released in 2019, Kiley Reid’s debut dissects some pretty hefty themes but in a light way which is a credit to her skill as a writer. This list of books like Such a Fun Age will definitely spark a diverse and interesting conversation, they are important and go a long way to teach readers about prejudice, racial bias and stereotypes.

That Kind of Mother, by Rumaan Alan

Rumaan Alan and his second novel That Kind of Mother kicks off this list of astounding books like Such a Fun Age as he ponders race, privilege, motherhood and what it means to be family.

New mum Rebecca is overwhelmed by parenthood. Though she loves her son, she has trouble navigating this new life and the sacrifices being a mother entails. She calls upon Priscilla, a kind black lady she met in hospital, to be her nanny.

Priscilla not only helps Rebecca realise how to be a mother, she also helps her to confront her own privilege, a lesson that compels her to take on her biggest challenge yet in the wake of tragedy. For when Priscilla dies in childbirth, it is Rebecca who steps forward to adopt Priscilla’s baby, quickly finding that being a white mother to both a white and black son each poses very different struggles.

I found Rebecca to be quite an unlikable character, whether this was Alan’s intention I am unsure, luckily this doesn’t get in the way of the narrative and what is an astute rumination on the white saviour tropes, That Kind of Mother is well written and definitely worth a read.

If you liked Such a Fun Age for the sharp and well developed characters then you will love our next book; Candice Carty Williams’ bold and brilliant Queenie.

25-year-old, Jamaican British, Queenie Jenkins feels lost after enduring a particularly messy break-up. Finding no solace in her job where she spends a lot of her time comparing herself to her middle-class white colleagues, she starts looking for comfort in other places, the wrong places, including a few toxic men who do little for her self esteem.

Fresh, honest, daring, disarming, inclusive are just some of the words to describe Queenie, Carty Williams’ female force of nature.

The Mothers, by Brit Bennett

Brit Bennett really is proving herself to be a new razor-sharp voice in fiction, I have previously written about her second novel The Vanishing Half, but her debut The Mothers is equally brilliant and the perfect read for anyone looking for their next book similar to Such a Fun Age.

Set in Southern California, within a contemporary black community, we follow Nadia Turner through grief, rebellion and her final term of High School.

Following her mother’s suicide, Nadia starts seeing Luke Sheppard, a 21-year-old former football star and son of the local pastor. They are young, it isn’t serious; that is until Nadia falls pregnant. Now they have a big decision to make, a decision which tears them apart and haunts them constantly, well into adulthood.

As with Carty Williams and Queenie, Bennett has created some memorable characters, characters who act on their worse impulses which she writes about so perceptively. The Mothers is a shrewd story about community, love, secrets and choice – an astounding debut.

The Hate U Give, by Angie Thomas

Our next book is incredibly timely in the wake of recent events involving police brutality, unfortunately, Angie Thomas’s debut novel is inspired by real-life events — it is the startling and shocking The Hate U Give.

Starr Carter inhabits two worlds. The world of her elite high school, the predominantly white Williamson Prep, and the world where she lives, a poor back community called Garden Heights. Starr happily occupies space in both these worlds, until they collide when her black childhood friend Khalil gets shot by a white police officer and she is the only witness.

Now Starr is torn between standing up for what is right and trying to make her school friends, who could never possibly understand what she is going through, understand.

The Hate U Give is a startling read made even more harrowing knowing that what you are reading isn’t really fictional at all, a fitting novel for anyone looking for their next novel like Such a Fun Age.

Like Reid, the way Thomas portrays race relations in the novel really welcomes empathy and discussion about the Black Lives Matter movement.

Have you already read this moving novel? Check out our list of books like The Hate U Give!

My Name is Leon, by Kit de Waal

Though our next novel is set in the ’80s and therefore not so much a millennial manifesto of the black experience, Kit de Waal does explore similar themes surrounding systemic prejudice this time with children and the care system it is the heartbreaking, and at times hilarious, My Name is Leon.

Leon is nine, big brother to baby Jake and man of the house as it falls on him to take care of things when his mother Carol starts struggling to cope.

Though he does his best, it isn’t long before he and Jake are put into foster care. If losing his mother wasn’t enough, Leon is left alone when baby Jake is adopted because he is white and a baby and Leon is not.

Told from Leon’s perspective we witness him try and adjust, learning from the men he meets on the allotment that you don’t need to be related to be family.

Uncomfortable to read at times particularly the aspects of the care system and the brutal riots in 1980s England, My Name is Leon is an important read one which fans of novels like Such a Fun Age are sure to enjoy.

Similar to some of the other titles appearing on this list of books like Such a Fun Age, our next novel is said to be inspired by true events which again makes the plot all the more harrowing, it is Jodi Picoult’s 2016 novel Small Great Things.

Ruth Jefferson is an African American labour delivery nurse in charge of newborns at a hospital in Connecticut.

During a shift, she is instructed not to touch or go near one particular baby because his father Turk Bauer, an obvious white supremacist with swastika tattoos and all, made it known he didn’t want Ruth to touch his baby.

Though Picoult faced some criticism herself for writing about black experiences when she herself is white and therefore cannot relate, Small Great Things is still an eye-opening read and an accurate portrayal of our messy racial climate.

Girl, Woman, Other, by Bernadine Evaristo

Though Bernadine Evaristo’s Booker Prize-winning novel predominantly explores the experiences of women of colour she also delves into the struggles and prejudice experienced by women in general; those who are born female and those who identify as such in her eye-opening novel Girl, Woman, Other.

Each character and their story interweaves with another in some way whether through family, friendship or chance encounter.

There’s Amma — a gay playwright –, her good friend Dominique — who immigrates to America with her controlling girlfriend, Amma’s daughter Yazz who she raised to be free –, feminist and powerful, Carole — another of Amma’s close friends, a teacher who taught a number of other characters in the book and plenty more.

Though linked, the parts of Girl, Woman, Other are like 12 separate stories set across decades, Evaristo expertly creates her characters, their dialect, their thoughts, their motives exploring not just what it means to be a woman but a black woman.

If you liked Such a Fun Age for the discussions raised around racism, feminism, patriarchy, success and relationships then add Girl, Woman, Other to your reading list.

Mia and her daughter Pearl travel around never staying in one place long enough to lay down roots, Pearl never questions why and is used to it by now. That is until they make it to Shaker Heights and meet the Richardsons.

Mother Elena Richardson tries to help Mia, offering her and Pearl somewhere to stay and Mia a job cleaning her home, quickly becoming fascinated by Mia’s aloofness. A fascination that intensifies when a friend of Elena’s gets caught up in a very public and bitter custody battle while trying to adopt a Chinese-American baby.

Elena and Mia find themselves on opposing sides which Elena cannot fathom little knowing that the situation is a little too close to Mia’s own heart. Little Fires Everywhere is a compulsive read, the perfect end to this list of astounding books like Such a Fun Age.

Books like Such a Fun Age can be uncomfortable to read which only heightens their importance and the skill of the author to write about distressing events and difficult topics in an engaging and educational way, they are books that everyone should read at least once.

Are you searching for more books like Such a Fun Age? Have any recommendations that didn’t make the list? Let us know in the comments! 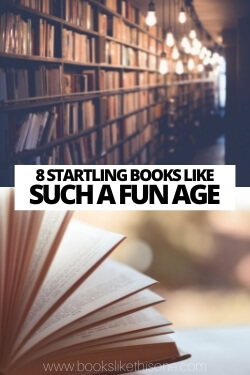