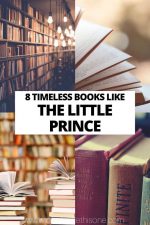 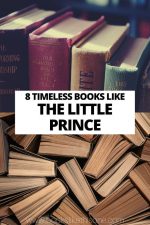 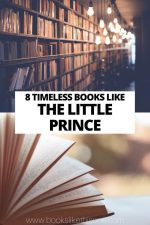 Many readers find themselves searching for books like The Little Prince because some stories remain favourites long after childhood, revealing new meanings and renewing enjoyment after every read well into our adult lives. For many, that story is Antoine de Saint-Exupéry’s 1943 spiritual novella The Little Prince.

After crashing his plane in the Sahara Desert the narrator meets the ravenously curious Little Prince who is visiting earth on a quest for love and connection. The Little Prince sadly recalls what he has discovered on his adventures across the universe, including the short-sightedness and narrow mindedness of adults among many other painfully accurate remarks about human nature.

The multidimensional narrative echos the logic and imagination of a child which is perhaps why it is often perceived as a children’s story yet, Saint-Exupéry’s poignant observations of life speaks to adults too. Therefore it is not surprising that The Little Prince is one of the best selling and most translated books ever to be published. If you are looking for more books like The Little Prince to fall in love with time and time again then take a look at these suggestions of timeless classics guaranteed to reawaken the child in you.

Alice’s Adventures in Wonderland is one of the most popular and best-known pieces of English fiction. It has been incredibly influential to other pieces of literature and in popular culture therefore it is a great fit for anyone looking for more books like The Little Prince which have stood the test of time.

Written by Charles Lutwidge Dodgson in 1865 under the pseudonym Lewis Carroll, the story follows a young girl named Alice who falls down a rabbit hole and into a peculiar fantasyland full of absurdities known to everyone as Wonderland. Alice has to overcome a great many challenges in order to make it back to the real world including swimming in a pool of her own tears, cracking riddles at the famed Mad Hatter’s tea party and giving evidence at a trial to determine who stole the Queen of Hearts tarts!

Alice’s Adventures in Wonderland plays with logic and explores themes like the inevitable loss of childhood and the frustrations of life’s many meaningless puzzles. Particularly poignant is Alice’s struggle to survive amongst the world of adults which echos the Little Prince’s own discoveries on his journey through the universe.

The Old Man and the Sea, by Ernest Hemingway

In Ernest Hemingway’s last major work of fiction to be published in his lifetime, The Old Man and the Sea sees an anonymous narrator tell the story of Santiago, an aged, Cuban fisherman. Santiago is struggling with a streak of bad luck having not caught any fish for 84 days.

To break his cycle of luck and prove he has not yet admitted defeat, Santiago ventures out into the deeper waters of the Gulf Stream. Here he catches a great marlin and they battle with each other for three days before tragedy ensues. The novel epitomises turning defeat into triumph and celebrates strength, wisdom, perseverance and friendship.

In one reading, The Old Man and the Sea is a gripping story of man’s battle with nature. In another the pages reveal a narrative rife with religious symbolism as Santiago is often likened to christ on this, his trip of redemption.

If you liked The Little Prince because you enjoy deciphering the many hidden meanings and the fable-like allegory of the narrative, then Hemingway’s The Old Man and the Sea will be the perfect next read for you.

Around the World in Eighty Days, by Jules Verne

Published just under 150 years ago, Around the World in Eighty Days is one of Jules Verne’s most highly acclaimed novels. Another adventure story which charts the quest of famed British gentleman Philleas Fogg and his valet Jean Passepartout as they attempt to circumnavigate the world by any means possible over the course of eighty days.

After accepting a wager of £20,000 to do so, the pair seize whatever transportation they can including steamships, trains and elephants to complete their journey within the given timeframe. Verne’s mile a minute crusade sees Fogg and Passepartout get arrested, miss their travel connections, encounter bad weather in exotic lands and dangerous locations in the ultimate race against the clock.

The adventure allows Fogg to break the routine of his incredibly precise and predictable day to day life and encourages him to see the real world again which is just what Saint-Exupéry inspires readers to do, making Around the World in Eighty Days an eye-opening read for anyone looking for more novels like The Little Prince.

There have been numerous adaptations of Robert Louis Stevenson’s gothic novella the Strange Case of Dr Jekyll and Mr Hyde since its publication in 1886 making it the perfect addition on this list of timeless books like The Little Prince.

An anonymous narrator follows a London lawyer named John Gabriel Utterson as he investigates some strange occurrences between his friend, the revered Dr Henry Jekyll and an evil character, Mr Edward Hyde.

The narrative unfolds to reveal how the Doctor sought to separate his good-natured side from his darker evil tendencies and consequently found a way by transforming into a monster free of conscience. But when these transformations become involuntary and uncontrollable, some drastic action has to be taken.

The novel explores the complex dualities of human nature with the phrase Jekyll and Hyde now part of the vernacular referring to people with split personality or an unpredictable nature which demonstrates the impact the novel has had on the world. If you like the widespread acclaim and popularity of The Little Prince then you are sure to be thoroughly captivated by the Strange Case of Dr Jekyll and Mr Hyde too.

Watership Down, by Richard Adams

Richard Adams 1972 debut novel Watership Down started out as a story he made up to tell his own children. Now it is enjoyed by children and adults all over the globe and has won Adams critical acclaim along with plenty of awards including the Carnegie Medal and the Guardian Prize for Children’s Fiction.

The story centres around a small group of anthropomorphised rabbits who possess their own language, poetry and culture and are seeking a new home after their old warren is destroyed. An omniscient narrator recounts their adventures and the different perils and temptations they encounter as they search for a new place to call home including dog attacks, human interference and a war with the novels famed villain, the militant and vengeful General Woundwort.

Set in the idyllic rural English Down’s the novel draws on themes of leadership, nature, family and the importance of home which chimes a particularly familiar tune with Saint-Exupéry’s novella, therefore if you enjoyed this aspect of The Little Prince then you are sure to enjoy Watership Down just as much.

We return to the sea with Herman Melville’s classic 1851 novel, Moby-Dick. The book is narrated by Ishmael, a sailor onboard a whaling ship whose captain, Ahab, has launched revenge on a giant white sperm whale who bit off one of his legs on a previous voyage.

The giant white sperm whale is, of course, Moby-Dick and Ishmael chronicles their adventurous voyage as Ahab slowly becomes a slave to revenge putting his whole crew in danger.

Melville writes with a wonderful humour while he demonstrates a profound exploration into character, faith and the nature of perception which highlights the limitations of human knowledge and is also reminiscent of the Little Prince’s findings during his own quest.

Initially published to poor acclaim the novel only became considered a great piece of literature in the 20th Century. The opening line, “Call me Ishmael” is one of the most famous lines in the literary world making Moby-Dick a truly gripping read for anyone looking for novels similar to The Little Prince.

Robert Lois Stevenson wanted to write an adventure story for boys and he certainly succeeded with his epic Treasure Island. Since publication in 1882, Treasure Island has gone on to be the inspiration behind many many more tales of pirates, buried treasure and quest voyages and is a great read for anyone looking for more enduring classic books similar to The Little Prince.

Told from the point of view of Jim Hawkins the son of an innkeeper, we see what happens when he discovers a map said to reveal the location of the great treasures allegedly buried by the famous pirate Captain Flint. The map leads Jim on a climatic voyage as he, along with many others, battle for the treasure on a distant tropical island.

The coming of age escapade explores the issues of deception, secrecy, trust greed and the futilities of desire all while keeping you entertained page after page and for many reads to come.

Don Quixote is often considered to be the best piece of literary fiction ever to be written and is one of the most influential works of Spanish literature. Miguel de Cervantes adventure novel was published in two parts and tells the story of a noble hidalgo from La Mancha who goes by the name of Don Quixote. An ingenious gentleman who reads so many chivalrous romance novels that he decides to become a knight himself.

The novel follows Don Quixote’s hilarious adventures with his faithful squire Sancho Panza as they roam the world attempting to destroy the wicked and the evil and defend the needy and the helpless proving that chivalry is not dead, often to comical effect.

Cervantes experiments with form and playfulness with literary style has kept readers imaginations alive for over 400 years making Don Quixote the perfect read for anyone looking to escape the real world with more books like The Little Prince.

These timeless classics are filled with adventures that encourage you to stay a child at heart and keep an imaginative outlook on the world. Inspired by Antoine de Saint-Exupéry’s character, this list of timeless books like The Little Prince can be read or reread at any age and never lose their thrill or enjoyment which allows you to fall in love with them over and over again.

Are you looking for more books like The Little Prince? Have any suggestions that didn’t make the list? Let us know in the comments! 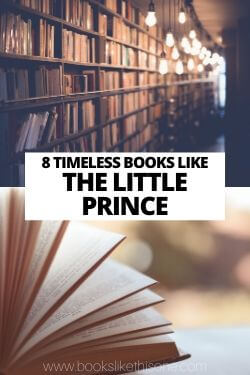