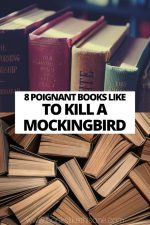 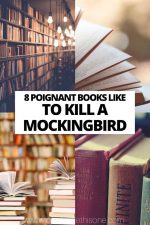 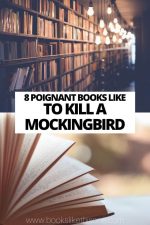 Harper Lee’s iconic 1960 novel To Kill a Mockingbird is considered to be one of the best works of American literature. The coming of age novel, told through the eyes of 6-year-old Jean Lousie “Scout” Finch, brilliantly describes the injustice of race relations in the American South by depicting a rape trial of an innocent black man in a small town in Alabama in the 1930’s. Written in the height of the Civil Rights movement in the USA and directly after the period of McCarthyism, To Kill a Mockingbird was an especially poignant work of literature upon its release and still continues to be relevant today. If you’ve read Harper Lee’s masterpiece and are looking for more books like To Kill a Mockingbird, then make sure to check out these suggestions.

The Heart is a Lonely Hunter, by Carson McCullers

If you liked To Kill a Mockingbird because of its expert examinations of social dynamics within a small deep south town, then Carson McCullers’ 1940 novel The Heart is a Lonely Hunter is a great choice for you. McCullers’ first novel and published when she was only 23 years old, this southern gothic bildungsroman was met with immense critical acclaim and has even made it onto Modern Library’s list of the 100 best English-language novels of the 20th Century.

The novel, set in a small town in Georgia in the 1930s, follows the interactions and relationships forged with the deaf-mute John Singer. Because of his silent nature, citizens of this town use Singer as their confidant and the individual personalities and dynamics of this small town are revealed.

Exploring deep themes such as the search of a human connection, the effects of loneliness, and racial tensions in the deep south, The Heart is a Lonely Hunter is an incredibly moving novel and a deserving option if you’re searching for books like To Kill a Mockingbird.

The Adventures of Huckleberry Finn, by Mark Twain

Considered by many to be one of the best novels of all time and the figurehead for “The Great American Novel,” Mark Twain’s The Adventures of Huckleberry Finn is a great choice if you’re interested in finding more books similar to To Kill a Mockingbird.

Though controversial today, The Adventures of Huckleberry Finn is considered to be one of the best works of American literature and it is an incredibly enlightening read if you’re interested in learning more about American deep south culture. Published in 1885 though set in the antebellum south, Huck Finn follows the story of the eponymous protagonist as he runs away from home and takes off down the Mississippi in the company of an escaped slave called Jim.

The novel follows such themes like identity and race and race relations in the United States, especially about how black Americans were perceived and spoken about in the antebellum south. Because of its liberal use of racial slurs (and the poor behaviour of the protagonist), the book has garnered a significant amount of controversy since its publication and continues to be removed from reading lists and libraries to this day. Despite this, The Adventures of Huckleberry Finn is a worthy addition to any list of books similar to To Kill a Mockingbird.

If you’re looking for books like To Kill a Mockingbird because you liked reading about the cultural and societal structures of the American south in the 1930s, then William Faulkner’s novel The Sound and the Fury is a good choice for you.

Originally published in 1929, the novel follows the Compson family in Jefferson, Mississippi. The novel explores this family as they began their lives as southern aristocrats and later fall into poverty and financial ruin and all of the implications that come along with it.

Written in four parts, each section is told in a different voice and from a different perspective, including a pervasive stream of consciousness part, making it an iconic novel based on the bold writing styles explored. It also gives a very interesting viewpoint of society from multiple points of view. Again, considered to be one of the greatest works of 20th Century fiction, The Sound and the Fury is an excellent addition to any reading list.

Not to be confused with HG Well’s 1897 science fiction novel The Invisible Man, Ralph Ellison’s 1952 bildungsroman Invisible Man explores the life of a metaphorically invisible man as the unnamed protagonist navigates life as a black man in America.

Told from the perspective of an unnamed narrator, Invisible Man follows his story as he progresses through life striving to be seen as a valuable human in a world where the odds are invariably stacked against him. It is an incredibly powerful novel that expertly humanises the plight of people of colour in the US and is an important novel to read if you’re interested in exploring more the themes of humanising the marginalised that are covered in To Kill a Mockingbird.

Invisible Man examines many of the racial and social issues that were pervasive in 20th Century America and is still incredibly relevant to today’s culture.

The Grapes of Wrath, by John Steinbeck

If you are searching for novels like To Kill a Mockingbird because you are interested in reading about the status of American life during the Great Depression, then John Steinbeck’s masterpiece The Grapes of Wrath is a must-read for you.

Awarded the Pulitzer Prize for Fiction and the National Book Award, this 1939 novel is one of the greatest works of American fiction and expertly conveys the plight of economic migrants to California from the Dust Bowl drought in Oklahoma in the 1930s.

The novel follows the Joad family, who are tenant farmers in Oklahoma forced to relocate to California for more economic opportunity after a prolonged period of drought and bank foreclosures that has forced them out of work. Joining thousands of other “Okies” on a modern-day exodus, the novel follows their harrowing journey to find jobs and dignity and opportunity.

Much like To Kill a Mockingbird, The Grapes of Wrath does an excellent job in humanising a marginalised class and will continue to be a work of great American literature for decades to come.

If you want to read more about what has perpetuated the racial inequality that is explored in To Kill a Mockingbird, then Octavia Butler’s 1979 novel Kindred is an excellent choice for you.

Based off of traditional slave narratives, this novel follows a modern-day black woman called Dana who is inexplicably called back in time from her life in 1976 to an antebellum Maryland plantation in the year 1815.

Published to much critical acclaim and subject to much academic scholarship, Kindred provides a startlingly accurate depiction of the realities and horrors of slavery and examines how it has affected race relations throughout American history.

Though both written and set in a much different time period to To Kill a Mockingbird, Kindred examines many of the same themes such as racial injustice and the origins of the systemic racism that still very much persists in American culture today.

Another non-traditional slave narrative, Toni Morrison’s poignant 1987 novel Beloved is an excellent addition to any list of books like To Kill a Mockingbird. A recipient of the Pulitzer Prize for Fiction and a finalist for the National Book Award, Beloved also belongs on this list to commemorate the recent passing of Toni Morrison, who did wonders for illustrating the life and plight of black Americans.

Beloved, a sharp and touching novel, uses the style of magical realism to hauntingly display the psychological impacts of slavery and how we feel pain. The novel follows escaped slave Sethe and her daughter Denver as they navigate their new lives in Cincinnati, Ohio. As the story progresses, they are perpetually haunted by the ghost of Sethe’s eldest daughter, Beloved, as she grows.

Beloved is an important read, however, it isn’t a lighthearted one and it covers themes like familial relationships, the definition of manhood, and examines the origins of systemic racial injustice in the United States.

A Raisin in the Sun, by Lorraine Hansberry

A departure from the novels on this list of books like To Kill a Mockingbird is Lorainne Hansbury’s play A Raisin in the Sun. This play, loosely based off of real events, depicts the trials of the Youngers, a black family in Chicago, as they receive a life insurance payout after the death of the familial patriarch and plan to use the money to relocate to a majority-white neighbourhood.

The play loosely mimics the litigation in the case Hansberry vs Lee (carried out by the author’s father) where the white neighbourhood tried to block the black family from moving there. A Raisin in the Sun follows the family dynamics as they try to move there, elevate themselves economically, and strive for a better life.

Much like in To Kill a Mockingbird, this play examines themes like racial injustice and the relationship between whites and blacks in America.

Finding great books like To Kill a Mockingbird is not a difficult task and reading any of the above titles is sure to broaden your understanding of the tougher points of American history.

Are you looking for books like To Kill a Mockingbird? Do you have any recommendations that didn’t make the list? Let us know in the comments!