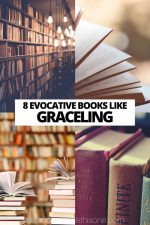 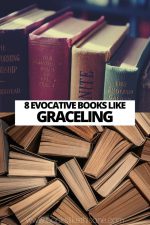 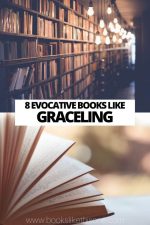 Love it or loathe it, The Hunger Games opened the door for a whole slew of young female-led fantasy, dystopian and science fiction. This was a great thing! Graceling came out just 1 month after The Hunger Games was originally published in 2008. Both books presented readers with a strong female protagonist living in a world where everything seems set against her.

In Graceling, Katsa is strong – literally. She can kill a man with her bare hands and has been able to since she was 8 years old. Katsa is a Graceling, part of a rare group born with extreme skills. In Katsa’s case, her skill is killing and as niece to the King, she is forced to do so at his every command.

As the story progresses, we follow Katsa as she learns the truth behind her grace along with secrets that could destroy the world she knows. If you’ve already read the Graceling series, there are similar titles to enjoy.

Books like Graceling have caused a lot of disagreement between readers. Throne of Glass is definitely a book that divides reader opinion. The story follows Celaenia; an 18-year-old assassin recently released from prison and offered her freedom by the Crown Prince, on one condition: she must act as his champion in a competition to find the next royal assassin.

The Q&A at the back of this novel reveals that Mass was inspired by Cinderella. Whilst there are clear signs of this throughout the piece, Celaenia is someone who has more drive than Cinderella, and she is certainly more lethal. Opinion remains divided on Throne of Glass, with some hating it whilst others love it.

As always, I would recommend reading yourself before forming an opinion, and if you liked Graceling, there is a fair chance you’ll like Throne of Glass.

There are books like Graceling that enjoy playing with tropes old and new. Trickster’s Choice does this as we follow Alianne, the teenaged daughter of the first lady knight in Tortall. Unfortunately, Alianne is more interested in following in her father’s spymaster footsteps.

When Alianne is captured and sold to an exiled royal family as a slave, it is her spying that stands her in good stead. She soon discovers conspiracies, plots and political intrigue. Trickster’s Choice takes place after the events of Pierce’s earlier Tortall books, but the fantasy setting and plotting remain interesting and engaging.

Alianne is a good protagonist, pretending to be slow-witted and dull when she is anything but. It is fun to follow her as she fools and tricks her way past arrogant characters. If you like Graceling, you should give Trickster’s Choice a chance.

War for the Oaks, by Emma Bull

Books like Graceling are not confined to the 21st century. War for the Oaks first appeared on bookshelves back in 1987 and won the Locus Award for Best First Novel. Modern urban fantasy owes much to Emma Bull’s debut.

Eddi McCandry is our protagonist. A rock and roll singer who’s breaking up with her boyfriend at the same time her band is splitting up. As if things couldn’t get worse, Eddi is drafted into an invisible war between faerie folk as she’s walking home in the rain.

Adventure, romanticism, rock and roll, and faeries all combine to deliver a story that is fun and filled with drive. The most recent wave of faerie fantasy can tip its collective hat to Emma Bull.

There are always books like Graceling that enjoy inverting expectations. Poison Study introduces the reader to Yelena, a young woman about to be executed for murder before she’s offered a last-minute reprieve. All she has to do is become a food taster for the Commander of Ixia.

An easy choice, until the Chief of Security poisons her with Butterfly Dust, forcing Yelena to appear every day for a daily dose of antidote. Behind all of this, a rebellion is brewing, disasters arrive left, right and centre, and Yelena starts developing magical powers.

Poison Study is filled with likeable characters, an interesting world, and some spectacular events. Some reviewers have accused it of being unoriginal, but I would disagree. Many stories have already been told, yet there are always new ways to tell the same story.

Poison Study is an old story told in a new way, and if you liked Graceling, I think you will enjoy it.

Fairy tale tropes and retellings are common in books like Graceling. Sister’s Red is a delightfully gruesome spin on Little Red Riding Hood. Scarlett March has one goal in life: to hunt the werewolves who took her eye when she defended her sister Rosie from a brutal attack.

Rosie accompanies her sister on the hunt but is growing more and more disillusioned with the bleak lives they lead. Enter Silas, a young woodsman who is Scarlett’s only friend and someone who Rosie finds herself becoming more and more attracted to.

The story of Sister’s Red might be easy to predict, but the story itself is a solid read. My only critique would be the way Pearce writes about young women in danger. You get the sense that Scarlett and Rosie are acting as the protectors of young pretty girls who remain ‘oblivious’ to the dangers around them.

Scarlett and Rosie are written as the saviours of every young drunk girl who’s about to be taken advantage of by a ‘wolf’ of a man. This is dangerous as it transfers responsibility of some men’s predatory nature to the girls they take advantage of.

Younger readers might feel that young women should dress and behave appropriately, lest some horrible man takes advantage. That is not right. Any man should be able to exercise self-control, and if he cannot, then he is the criminal.

Aside from this muddy messaging, Sister’s Red builds a very believable relationship between two siblings who gradually grow apart. Many readers will find much that resonates.

Angels and demons are not unheard of in books like Graceling. Daughter of Smoke & Bone introduces us to Karou and Akiva, a chimaera and an angel who should be mortal enemies, but aren’t.

Around the world, black handprints are appearing on doorways, scorched there by mysterious winged beings. Karou is a young art student in Prague and her notebooks are filled with drawings of monsters that of course, turn out to be real. The narrative really revs up when she meets Akiva, and discovers the truth of who she is.

What makes Daughter of Smoke & Bone work is the character relationships. Karou is not someone who simply ‘swoons’ over the new mysterious stranger in her life. She knows the shadowy depths people can sink to and is all too aware of the way some men like to treat women.

Akiva is multi-layered and doesn’t subscribe to the oft-used ‘badly-behaved-mysterious-stranger’ trope. He is neither good nor evil. A fitting character creation that will introduce younger readers to the complexities of the real world.

If you liked Graceling, you will enjoy this.

Forbidden romance fills many books like Graceling. In Cruel Beauty, we follow Nyx, a young woman who is arranged to marry the evil ruler of her kingdom.

Resenting her family for not trying to save her from this fate, Nyx comes up with her own plan. Seduce the evil ruler, Ignifex, destroy his magical castle and break the curse he has placed on her land. Of course, when Nyx meets Ignifex, he is not what she expected.

Cruel Beauty is another Beauty and the Beast retold. It follows many of the classic story beats whilst throwing in a few surprises you will not expect. Ignifex is interesting to read about, and whilst Nyx is not the strongest protagonist, she has enough agency to pull you through the story. Romance and fantasy have always mixed fairly well.

This is another entertaining example of fairy tales retold.

The Killing Moon, by N.K. Jemisin

Some books like Graceling only bear a passing resemblance to standard fantasy tropes. The Killing Moon turns many fantasy beats on their head, presenting the reader with a uniquely told story. Jemisin stands above many science fiction and fantasy authors in her field by dint of her voice.

In The Killing Moon, we follow Gatherer Ehiru as he begins to question everything he knows about his world. Set in the ancient city-state of Gujaareh (think ancient Egypt mixed with cobbled streets and magic) where gatherers harvest the magic of the sleeping mind, using it to heal, soothe, or even kill people judged corrupt. Ehiru must uncover a conspiracy that is killing innocent dreamers before it is too late.

On the surface, this seems like a standard high fantasy story, but as you read you soon realise it is anything but. Jemisin manages to shine a light on areas of life seldom discussed, including what it is actually like to be in a hospice.

Ethics, history, sexuality and a caste system based on skin colour are all here. Women are people, not tropes. They have their own insights, determination and prejudices. Characters feel real.

If you like the more sophisticated elements of Graceling, you will love The Killing Moon.

Books like Graceling are filled with high stakes, richly complex characters, and romantic subplots that do not override everything else. The above titles are just a few of our suggestions.

Are you looking for more books like Graceling? Have any recommendations that didn’t make the list? Let us know in the comments! 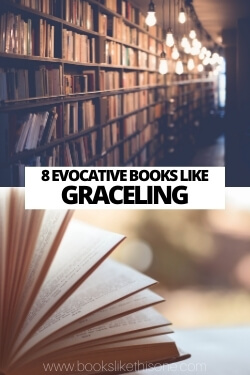