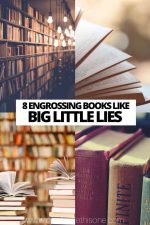 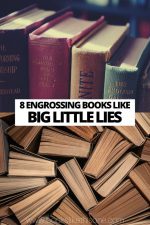 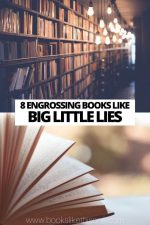 Are you searching for more books like Big Little Lies? Though Big Little Lies has turned into a smash hit television series, starring Reese Witherspoon, Nicole Kidman and Shailene Woodley, it started as a novel, about the lives of three women, and how they intertwine, eventually leading to a murder investigation.

From the beginning of the novel you know someone is dead, but who? As we are drawn deeper into the lives of Madeline, Celeste and Jane, it seems any one of them could have the motive to kill someone, as we watch these women deal with affairs, domestic violence and rape.

The novel perhaps illuminates the real struggles modern-day women face on a day to day basis and sheds light on the secrets each of them keep, and why. It is no wonder it was such a huge success, spawning what was supposed to be a one-season show, into one now filming its third season, extending beyond what Moriarty wrote in her novel.

The following books like Big Little Lies explore similar themes such as families, secrecy, and the lies we tell the world to hold onto what we have, just like in Big Little Lies.

He Said, She Said, by Erin Kelly

He Said, She Said is a novel that is built on secrets and lies, just as in other books like Big Little Lies. Laura and Kit have been running forever, but the reasons why are unclear. In order to understand why they live as they do, we are taken back fifteen years previously, when they had first fallen in love.

The pair attend a festival, and while there, become the witnesses to a terrible crime, one that they have no choice but to testify to in court. This, and their relationship with one of the involved parties in the incident begins to quickly unravel their lives, putting them in danger that they are unequipped to deal with.

Both Laura and Kit are keeping secrets, much like the characters in Big Little Lies; they keep secrets for and from one another in the hopes of regaining the once happy relationship they had before they went to the festival that would change their lives forever. A thrilling read, one with many twists and turns and will leave the reader wanting more.

Our Little Cruelties, by Liz Nugent

Liz Nugent’s newest novel, Our Little Cruelties, doesn’t disappoint – it has the same amount, if not more, despicable characters than her previous three if that’s at all possible.

The novel is about three brothers, Will, Luke and Brian, who have competed against one another their entire lives, their hopes and dreams, and romantic relationships often overlapping. The first page informs us that one of the brothers is dead, but which one?

It then progresses into telling us the stories of their lives, each from their perspectives, and it becomes abundantly clear that they are all dreadful people, and any one of them could be capable of murder or fall victim to it.

Just as in novels like Big Little Lies, it feels like there is a race to discover who the murdered party is, and it is the guessing that has you unable to put the book down until you finally discover who it is.

A wonderful read, completely original and not a bit predictable, Liz Nugent is a force to be reckoned with her and her novels continue to elicit shock and delight.

If you enjoy Moriarty’s writing style, then Nine Perfect Strangers is for you. Much like Big Little Lies, it is told from the perspective of multiple people, and it investigates the lives of those who are particularly vulnerable, namely those who have decided to partake in a retreat because, for one reason or another, their lives have fallen off track.

To name a few there is Frances, a writer who has lost her way and recently been duped by a man online, married couple Jessica and Ben, who differ on where they want their lives to go and the Marconi family, suffering from the loss of son and brother Zach, who committed suicide.

The retreat is run by a woman called Masha, who preaches healing, but seems to have ulterior motives, leading these unwitting characters into a trap. Like the women in Big Little Lies, each of these characters is dealing with something terrible, secret or not, and just trying to find a way to live with it, but have they put their trust, and their money, into the wrong person?

Not a murder mystery, but a mystery nonetheless that demands to be known, making it another triumph of Moriarty’s.

The Woman He Loved Before, by Dorothy Koomson

Koomson knows how to write a good thriller, and The Woman He Loved Before is no exception. Libby and Jack have the fairy-tale love story, they’re so smitten with each other and fell head over heels that they decided to quickly get married. But soon Libby begins questioning his relationship with his first wife, Eve, who appeared to be perfect, and died in somewhat mysterious circumstances.

Although Libby loves Jack, she can’t help but dig into his past with Eve, and soon finds a diary that belonged to her, detailing her life and struggles from before she met Jack, and after. Soon Libby is making dangerous discoveries, for herself and potentially Jack, and she must decide if learning the truth about Eve is something that is really worth it or are some things better off remaining in the past.

Just as in books similiar to Big Little Lies, this is a slow burner, but an exciting one – the secrets always begin small but begin to pile up, casting doubt in the reader as well as the protagonist, and making it impossible to put the book down. The Woman He Loved Before will create the same sense of urgency that Big Little Lies does, and the twists and turns are just as rewarding.

There are major similarities between Big Little Lies and Little Fires Everywhere, so much so that Reese Witherspoon signed on to do both of the TV adaptations. They both focus on family, and the way a little unhappiness can cultivate into something much bigger.

Mia and Pearl have just moved to Shaker Heights, renting a small house from Elena Richardson, a wealthy woman who works part-time for a newspaper and prides herself on her little acts of kindness.

Elena’s life could not be more different to Mia’s – she has a big house, a husband and four children who are all extremely privileged, while Mia works three jobs just to afford a place to live, often having to share a bed with her teenage daughter.

When a court case divides Shaker Heights and its sympathies, Mia’s secrets begin to come out, unleashing a past she wishes could have stayed hidden. Just as in books like Big Little Lies, one secret breeds another and another in Little Fires Everywhere, until there is the inevitable fall out, that destroys everything in its path.

Lying in Wait, by Liz Nugent

Family secrets play a major part in Lying in Wait. Nugent’s second novel focuses on the Fitzsimons, a family who unwittingly get mixed up in a crime, and work desperately hard to keep it hidden.

Lydia and her husband do their best to keep it from their son Laurence, but when he eventually discovers what it is, the consequences are disastrous, not only for his mother but for him as well.

Although the characters in Big Little Lies induce more sympathy, with the secrets they keep being past traumas, the secrets kept in Lying in Wait only serve to keep Lydia’s monstrous personality hidden, if only so she can remain in her beautiful home, living the life she has always been accustomed to.

Just as in books similar to Big Little Lies, secrets have a way of coming out when you least want them to, and such is the case for the Fitzsimons in Lying in Wait – the only question is what are they going to do when their façade crumbles, and who will Lydia betray to ensure her own safety.

Platform 7, though it isn’t revealed for a quite a while, is a novel about domestic abuse, whether that’s physical or emotional. Lisa witnesses a man walk off a train platform to his death, unable to stop him. Why? Because that’s exactly how she died, only a few weeks earlier.

Lisa’s doomed to haunt the place where her life came to an end, but as time progresses, she begins to remember who she was in life, and what drove her to that train platform to begin with, or rather, who drove her there.

Lisa’s story is very like Celeste’s in Big Little Lies – they both deal with abusive partners and live in fear of what is going to happen to them next, but unable, for one reason or another, to leave them. Like in Big Little Lies, Lisa cannot believe she’s found herself in this position, just like Celeste often tries to brush off the abuse she is facing at the hands of her husband.

Not many novels focus on domestic abuse in quite so candid of a way, and both novels do it extremely well – if you find it difficult to read some passages, then it is doing what it is supposed to do.

Lady in the Lake, by Laura Lippman

In Laura Lippman’s Lady in the Lake, protagonist Madeline Schwartz is a wannabe reporter in the 1960s. She has just left her husband and son, and begun an affair with a cop, and is seeking a new life for herself. She sees her big break in journalism with the Cleo Sherwood case – a woman who has been missing for weeks and one that the media seem intent on forgetting all about.

Madeline quickly becomes obsessed with the secrets of Cleo’s life, much to the dismay of those around her, and the closer she gets to the truth, the more danger she is unwittingly putting herself and others in.

Just as in novels like Big Little Lies, there is always a quest for the truth, whether you want to know it or not, and this novel follows Madeline as she refuses to give up on her obsession, desperate to make it big as a journalist, not understanding that her own little investigation could be the death of her.

Novels similar to Big Little Lies are gripping because often, the reader is kept in the dark as much as the characters who are looking to uncover these secrets. You become the investigator as well, coming up with your own theories, and there’s a certain thrill every time the plot twists again, and you have to scratch your own ideas.

All the novels on this list achieve this, and you won’t be able to put them down until you find out what happens in the end.

Are you searching for more books similiar to Big Little Lies? Have any recommendations that didn’t make the list? Let us know in the comments! 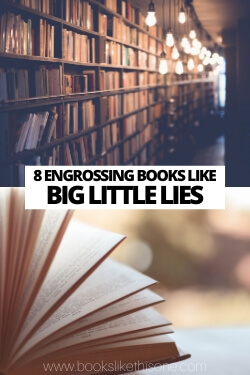