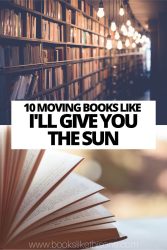 Books like I’ll Give You the Sun will pull on your heartstrings and make you beg for the happy ending the characters deserve.

In this book, we meet the twins Jude and Noah, who each own half of the world but like to exchange things, like the sun or moon, when needed.

After their mother’s unexpected death, the twins who were once inseparable are now emotionally on different planets. The two will retell their sides of the story in hopes of meeting in the middle and uniting again.

If you love heartwarming stories, then you will enjoy the following list of books similar to this one.

During the long search for his father, who is a billionaire wanted by the police for fraud and has disappeared, he reconnects with an old friend from summer camp.

Aza lives with a mental illness that causes her to obsess about anything having to do with bacteria. As soon as she starts thinking about bacteria being everywhere she goes into a panic and she is sure she has a deadly infection when she’s totally healthy.

There’s a reward out for any information on Davis’s father and Aza is convinced by her best friend to help her solve the disappearance to get the reward.

As Davis and Aza get to know each other again, Aza’s reason for helping find Davis’s father quickly changes. But will she be able to overcome her growing compulsive behaviour in Turtles All the Way Down?

Have you already read this novel? Check out this list of books like Turtles All the Way Down!

For 11 years, Macy has not seen or spoken to her first and only true love. When she can finally breathe a little after so many years of school, now that she’s a pediatric resident and engaged, she runs into Elliot.

When Macy was ten years old, her mother died and left her father a little guide of advice to help him raise her. So when he saves enough money, they buy a getaway house in a town outside San Francisco, next to Elliot’s family.

Throughout the book, we get a view into the start of their friendship up to now. We see how they turn into more than friends and then into strangers.

As the two try to rebuild the friendship they once had, Elliot will try to show Macy that she deserves the perfect love story they can have together. But will the true reason for Macy cutting ties all those years ago be too much for them in Love and Other Words?

What to Say Next, by Julie Buxbaum

Kit and David of What to Say Next seem to have nothing in common. Where Kit is popular, David is not.

So when Kit sits with David during lunchtime, he doesn’t know what to do or say to become friends with her, which leads him to ask about her father who just died.

Slowly the two realise they are more alike than they thought and their new friendship continues to develop while they try to figure out more about Kit’s dad’s car accident.

Similar to books like I’ll Give You the Sun, after a traumatic experience Kit wants to make sense of the tragic death and in the process, she will discover new things about herself.

But when Kit knows the truth, will her new friendship survive?

The Beginning of Everything, by Robyn Schneider

After having his leg broken in a car accident, Ezra had to say goodbye to his titles of varsity tennis captain, homecoming king and boyfriend.

Ezra feels like he lost everything and doesn’t know where he fits in. That is, until he meets the new girl Cassidy.

Similar to Jude from I’ll Give You the Sun, Cassidy is unpredictable, mysterious and everything Ezra needs in his life.

As the two become friends, participate in the debate team, and then date, there might be some bigger secrets that Cassidy is hiding. So they’ll have to go back to The Beginning of Everything.

When Rachel sleeps with Zahid, her creative writing professor, she wouldn’t have imagined the possibility of him staying with her and her mom for the summer.

With this turn of events, Rachel hoped having Zahid in the same house would bring them closer but instead it seems he’s warming up to her mother a little too much, creating a weird love triangle.

Rachel’s mother, Becca, has just lost her precious dog who she thought of as her child, which leads her to fill that void with Zahid’s dog – and Zahid.

Similar to books like I’ll Give You the Sun, the characters in Very Nice have different ways to deal with loss and other strong emotions that may not always be the healthiest.

As we hear the various perspectives, it will still be a shocking unravelling as everyone’s truth is spilled out.

Isabelle, the youngest of three, has always felt like the black sheep of the family. Because of her differences, she felt like her mother didn’t love her.

So when Mia and her daughter Pearl move to Shaker Heights into her family’s rental house, she finally feels seen by Mia.

Mia is running away from her secrets and is afraid of losing her daughter. This makes it hard for her to trust people and she’s always on the move, not staying in one city too long. But now she wants to give Pearl a real home.

Books similar to I’ll Give You the Sun, often have many complicated characters like in Little Fires Everywhere. They may act in unexpected ways but they have reasons for their actions and you must be open to hearing the full story even if it makes you like the person less.

During her junior year of high school, Jessie’s father decides to move them from Chicago to Los Angeles after meeting a woman online and eloping.

It’s been two years since her mother died but like Jude and Noah along with other characters from books similar to I’ll Give You the Sun, it hasn’t gotten easier for her.

Now Jess has to navigate a new city, school, home and family – all without any friends. However, the world gets a little less lonely when she starts receiving emails from “Somebody/Nobody” who she refers to as “SN.”

With no one else to turn to, Jessie gives SN the chance to be her friend even if it’s just online. But as the two get closer, Jessie will have to decide if she’s ready to meet him in person and potentially end the special relationship they have in Tell Me Three Things.

The Cactus, by Sarah Haywood

After losing her mother and ending her convenient relationship with a boring guy, Susan finds out she’s expecting a child with this man.

Although she’s in her forties, the unexpected pregnancy makes Susan feel closer to her mother but she also feels like she’s losing control.

While Jude and Noah in I’ll Give You the Sun are teenagers, they also struggle with their mother’s death like Susan and they each try to make sense of things in their own way.

When Susan is feeling her loneliness, she finds comfort in her brother’s friend Rob. Who says you can’t find love when you’re pregnant? But first, Susan has to learn to let things go and embrace change in The Cactus.

Speak tells the heartbreaking story of a teenage girl named Melinda who is an outcast at her school for calling the cops at a party but she’s not given the chance to explain what traumatic event happened to her.

Similar to other characters from books like I’ll Give You the Sun, Melinda struggles with knowing how to talk to people and how to ask for help. Additionally, Jude and Melinda also experience sexual abuse leading them to close up and not trust others.

Another similarity between Melinda and Jude is the way they express themselves through art. Even when they aren’t able to speak, they can release some of the pain in a creative form.

As Melinda continues to work through her trauma, will she learn to finally speak up not only for herself but for others?

The poems in Break Your Glass Slippers encourage females to be the main heroic character in their story and to go outside the norm.

This strong message is presented in I’ll Give You the Sun when Jude stops doing what is expected of her and starts doing what makes her happy.

The retelling of Cinderella with a spin empowers the reader to go after their own fairytale that can be untraditional and anything they want it to be.

Because as the series says, you are your own fairytale.

This list of books like I’ll Give You the Sun contains many characters going through trauma or loss and trying to figure out how to get to the other side. These characters often save themselves but luckily they also have people there to embrace them when they’re ready to walk towards the sun.

Are you looking for more books like I’ll Give You the Sun? Have any recommendations that didn’t make the list? Let us know in the comments! 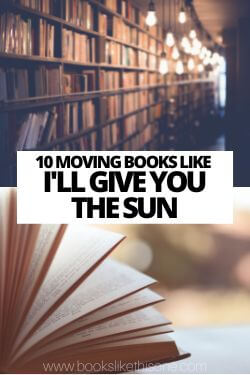