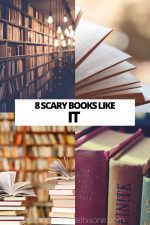 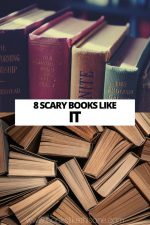 Stephen King is a prolific writer, with nearly one hundred novels and collections of short fiction under his belt, but It has to be one of the most famous. In Derry, Maine, when a young boy is killed, the murder is never solved and leads to the deaths of many more children.

What is killing them isn’t human, rather something supernatural, morphing into their greatest fears, and using it against them, with the most common apparition being Pennywise the Clown.

In 1958, seven children confronted this evil and then moved on with their lives. Now, in 1985, they’re all grown up, but the clutches of It has never released them entirely, and when the murders begin again, they must come back together, and face their worst fear, or die trying.

A truly magnificent novel that is original and unique in its storytelling, It is a must-read. The following novels are like It in the sense that they either follow children as they’re targeted by outside forces, or they portray a monster that needs killing, but how do the natural defeat something that’s not of this world?

Written during The Cold War, Lord of the Flies tells the story of a plane crash, that leaves a few dozen boys stranded on an island, and what they must do to survive in this new habitat. Ralph is instantly made the chief of the island, helped by the friendless but rule-abiding Piggy, and together they attempt to make the island habitable, while they wait to be rescued.

But another boy, Jack, doesn’t believe that Ralph knows how to run things, and would sooner hunt pigs than wait for someone to come and find them. What starts off as a break from the adult world soon turns into mayhem; power struggles ensue, and the ever-growing fear of a beast on the island grows.

Like It, this novel centres in on pre-pubescent boys and their struggles as they attempt to survive a dangerous place while fearing the evil that lurks in the shadows.

The Institute, by Stephen King

Books like It often centre in on children, and The Institute is no exception. King’s most recent novel is about Luke Ellis, a gifted boy who is kidnapped in the middle of the night while his family are murdered, and brought to The Institute, a school essentially for children with telekinesis or telepathy.

It is unclear what those who run the school are hoping to achieve by gathering these children, but what Luke understands instantly is that they’re dangerous, and they’re not afraid to hurt children to get what they want. Despite this, Luke makes friends, trying to piece together more of the puzzle, and stay alive in the process.

Like the children in It, Luke and others of his age are being targeted by something they cannot understand but must learn to fight if they hope to escape with their lives. The novel speaks to the resilience of children under traumatic circumstances, and the novels are only made scarier because of the age group that are being taken.

This novel doesn’t deal with children, but it does depict a humanlike monster who is out to kill anyone who stands in the way of his bloodlust. Jonathon Harker travels to Transylvania in order to help Count Dracula purchase some land in England but soon discovers there is more to the Count than meets the eye.

He just about escapes with his life, but soon strange happenings begin where he and his fiancée live, with one of her best friends falling victim to the vampire. As in novels like It, a team has to be formed in order to fight this supernatural creature, although they have no idea what they’re doing or how to best defeat this enemy.

Count Dracula is not unlike It, he is your worst fear realised and he promises not to go down without a fight, or without taking someone down with him. If you’re a fan of It and the horror genre, Bram Stoker’s Dracula is definitely a must-read.

Ishiguro’s novel, Never Let Me Go, isn’t a horror, at least not explicitly so. The story appears to be very normal at first – our protagonist Kathy H is simply reminiscing about her life, starting with her time at Hailsham, a boarding school for children.

She talks about her two best friends there, Ruth and Tommy, and the kind of childhood they had, which would sound idyllic, if not for the absence of parents, or the strangely gruesome tales about what happens to those who try to leave the school.

It soon becomes clear that Kathy and her friends are not ordinary children, they are special, and they must fulfil a purpose when they get older, rather than choose a life for themselves.

This is a mixture between dystopia and speculative fiction – there are no monsters that must be faced, as in books like It, but their future that hangs over Kathy, Ruth and Tommy’s heads is anything but pleasant – if only they could see it that way. Like the children in It must return to Derry, Kathy and her friends are predestined for a certain life that they could not escape even if they wanted to.

Have you already read this? Make sure to check out our list of books like Never Let Me Go!

This novel doesn’t focus on supernatural entities either, but nevertheless, there is someone killing children, making this novel incredibly creepy. Like in It, the bodies of young girls are showing up in Wind Gap, with their teeth pulled. There are no reliable leads, and the whole town is on a curfew, with parents fearing for their children’s lives.

Camille Preaker, a reporter who grew up in this town, returns home in order to write a story on the case, but such a trip brings up scarring memories for her, reminding her of her estranged relationship with her mother, and the sister she had who died in this town when she was a teenager.

The more Camille investigates the town, the more sucked in she gets, and with a half-sister who is the same age as the other girls going missing, soon she cannot help but stick around until she gets to the truth.

A truly horrifying novel about damaged characters in a backwards town, Sharp Objects is like other books like It in the sense that the killer is focused on young girls, and no one is able to figure out who is committing these crimes. A definite follow-up read to It.

The second King novel on this list of books like It, Doctor Sleep is the sequel to The Shining, this time with Danny all grown up and living with alcoholism because of the traumas he faced at the Overlook Hotel.

Danny’s powers, what he learns to call “the shining,” have followed him into adulthood and after years of dealing with addiction, he is seemingly at a good place in his life. However, he unintentionally connects with Abra, a teenage girl who is incredibly powerful. The only problem is with powers like hers, she’s a target to an immortal group called the True Knot and Abra has just popped up on their radar.

Just like in It, there are higher powers at play here, and their life force depends on children, or particularly their fear, making this the perfect novel to read if you’ve just finished reading about the evils in Derry, Maine.

The Outsider, by Stephen King

Stephen King is a great author for world-building and imagining the supernatural in highly realistic settings – the reason he’s so successful in the horror genre is because he has the ability to convince the reader that the monsters he writes about could indeed be very real.

The Outsider starts with the gruesome murder of a child, and the investigation that seamlessly links the crime with one man, Terry Maitland, much-loved father and husband.

The case seems like it’s open and shut, but Detective Ralph Anderson can’t quite let go of his reservations, particularly when Maitland insists he never did it, and has the alibi to prove it.

The evidence both suggests he did it and that he didn’t, but what are they supposed to believe, with the brutality of a boy’s murder being talked about among the neighbours? Could there be something supernatural at large?

King often uses children as the victims of his monsters, just like in books like It, and it’s perhaps because it is a parent’s worst nightmare, the death of a child. Their vulnerability makes the crime even more distressing and horrific for the reader.

The Chain, by Adrian McKinty

Unlike most of the novels on this list, The Chain doesn’t deal with the supernatural but the victims are always children. Rachel’s life turns upside down when she receives a phone call from a blocked number, saying that her daughter Kylie has been kidnapped, and unless she does what they say, Kylie will be killed.

The stakes are high from page one, and Rachel soon learns that The Chain won’t ever let you go once you’re in – she must kidnap another child in order to get her own child back. Unsure why she has been chosen, or if she’ll be able to do what is being asked of her, Rachel sets out to procure the necessary equipment to do the unspeakable, kidnap the child of another set of parents, no matter the penalty.

The Chain works so well as a thriller because the children are the ones facing death – as you read, you can’t imagine anyone murdering these children, but with their own sons and daughters at risk, just how far will a parent go to protect their own?

Like in It, it is the children who suffer the most, the ones targeted, the ones who must live the hell, hoping that their parents can come through for them, even if that means they become criminals themselves.

It is an incredibly long novel, but that’s to ensure you are properly invested in the lives of these children as you watch them face their worst fears, knowing that death is inevitable wherever It goes.

The novels on this list depict similar scenarios, of something unseen that is killing, whether that be supernatural or human, and you cannot wait to finish these books to find out how they overcome these things that hide in the shadows.

Are y9ou on the hunt for more books like It? Have any recommendations that didn’t make the list? Let us know in the comments! 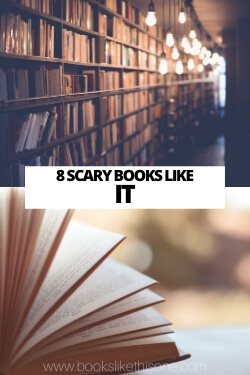