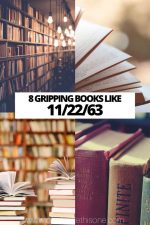 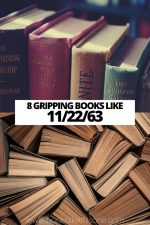 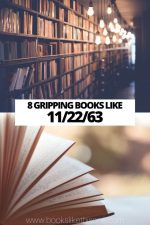 11/22/63 is a mammoth of a novel – it’s over 1,000 pages long, and yet it is so enthralling, so original in concept, that it doesn’t feel that way. The novel follows Jake Epping, a recently divorced teacher, who comes across a secret in his local diner – it holds a time-travelling portal to 1958.

His friend Al tells him that he’s been on a mission to stop the assassination of President John F. Kennedy but has since become too ill to complete the task, hoping Jake will take over for him instead. After much deliberation, Jake agrees, transporting himself back to 1958 where he must blend in for five years before he can follow through with the plan.

What Jake doesn’t expect is how quickly he becomes infiltrated with this life, finding it more appealing than the one he left behind in the present, and eventually, falling in love with fellow teacher Sadie. The novel took a tremendous amount of research into the years leading up to the death of JFK, as well as how life worked back then – it was an extraordinary achievement on King’s part.

Although not many novels can compare in terms of the actual story, the following novels all focus on characters who must band together to fight something bigger than themselves, often falling in and out of love in the process, just like in 11/22/63.

The bond that Jake and Sadie form in 11/22/63 is not unlike that of Kathy and Tommy’s in Never Let Me Go. Meeting in school, Kathy and Tommy have always had a friendship and an understanding, often meaning more to one another than either is willing to admit.

When they grow older they learn that they will only live a short life but they also discover there may be a way to defer their fate, if they can prove they love one another.

So the pair go up against the forces against them, despite all the odds, much like how Sadie and Jake do in books like 11/22/63; they know that the chance of them succeeding is slim, but it becomes worth it if it means they may have a shot of happiness together.

This kind of love strengthens both novels, it provides something for the reader to root for, even as we doubt whether their goals will be possible.

Have you already read this novel? Check out our list of more books like Never Let Me Go.

The Wall, by John Lanchester

The Wall remains very vague about the circumstances that led Britain to build a wall around itself, but the reader gets a deep understanding of the life of a Defender, those who must watch The Wall for invaders. One of these is Joseph, beginning his two-year sentence, which he can be free of if he is successful in his watch.

Here he meets Hifa, another Defender, and the pair begin a relationship, even discuss becoming Breeders in order to escape their fate.

Just as in books like 11/22/63, these two lovers are up against so much more than the typical obstacles that face a relationship – if they disobey their orders, they have little options beyond death or exile, the latter of which often ends in the former.

They are pitted against the odds of survival and happiness, and yet they continue to fight together, in the hopes of one day settling down to a happy future, not unlike Jake and Sadie in 11/22/63.

Atonement was shortlisted for the Booker Prize in 2001 and was made into a film in 2007 starring Keira Knightley and James McAvoy.

The novel tells the heart-breaking story of Robbie and Cecilia, in a story as old as time, from different worlds, but desperately drawn to one another. However, when Briony, Cecilia’s sister, sees something she doesn’t understand, it tears the lovers apart for years, only able to communicate through letters.

Though Robbie is sent off to fight in World War II, Cecilia waits for him regardless, hoping he will one day come back to her. The relationship is reminiscent of Jake and Sadie’s – although Jake loves Sadie, he travelled to the past in order to complete a mission, and this is first and foremost what he must do before they can be together.

Robbie equally is on a path he cannot control and must continue on whether he likes it or not. In novels like 11/22/63, love isn’t always enough, and such is the cast in Atonement as well when outside forces come to tear Robbie and Cecilia apart.

The totalitarian state of Gilead in The Handmaid’s Tale acts hugely as a force to tear people apart. This dystopian novel follows the unnamed narrator, who has been given the title Offred, after the man whom she is to provide a baby for.

With the fertility rates dropping worldwide, America is taken over by a group of religious fanatics, and fertile women who have “sinned” are taken from their partners and turned into Handmaids, providing babies for wealthy and barren families. Offred is first separated from her husband and child and placed into the Waterford household, where a rich Commander and his wife live.

When it becomes clear she is not able to bear the offspring of her Commander, Offred begins a relationship with Nick, their driver, and together they take back the little power that they can. Offred shouldn’t really be with Nick, just like in 11/22/63, Jake shouldn’t be with Sadie, and yet they’re unable to stay away from one another, even when the whole world is coming crashing down around them.

For much of the novel, where Offred’s existence is one trauma after another, Nick provides a little solace from this evil and makes it worth fighting for a better future.

Have you already read this novel? Check out our list of more books like The Handmaid’s Tale.

The Green Mile, by Stephen King

The Green Mile doesn’t have as much of a love story so to speak as the others on this list of books like 11/22/63, but it is also written by Stephen King.

Paul Edgecombe is a prison officer who supervises death row inmates before they have to walk the dreaded green mile to the electric chair. His job is a difficult one, but he takes pride in his efforts to keep prisoners comfortable and at peace before their executions.

His job is complicated when John Coffey is sentenced to death, a man accused of raping and killing two young girls although he appears entirely incapable of committing such an act. The novel is set in 1932, and though 11/22/63 is set many years later in 1958, there is the same level of research done in order to achieve a realistic setting.

Like in 11/22/63, death is coming, and like Jake and Sadie attempt to stop the JFK assassination, Paul and his comrades desperately try to prove Coffey’s innocence, which they become more and more convinced of with every passing day. These are two of Stephen King’s best novels, and both implement levels of magical realism perfectly.

Dalcher creates a dystopian world in Vox where women are only allowed to speak 100 words a day, counted by a bracelet on their wrists. Exceeding this limitation results in electric shocks, even for children.

The novel follows Jean, a former doctor, who is desperately trying to keep her daughter safe in this new misogynistic world. She is no longer able to work, and must simply be a housekeeper, while her husband is in total control of their finances. When the new corrupt government approach Jean with the promise of freedom, she’s unsure whether she can trust them.

They want her to work on a special project, and in exchange, she won’t be monitored for her speech, but what if the research she’s doing has the potential to hinder her gender even further?

Like Offred and Nick in The Handmaid’s Tale, and Jake and Sadie in 11/22/63, Jean teams up with former colleagues, and a former love, in order to overthrow the system, even when it seems impossible to achieve.

Lady in the Lake, by Laura Lippman

Lady in the Lake is set in the same time period as 11/22/63 and follows an unlikely pair trying to discover the truth about a murder that everyone seems hellbent on forgetting about.

Maddie Schwartz has just split up from her husband, moved into a tiny apartment and taken up a lover in the form of a police officer. She believes she partially solved a crime before and wishes to do so again, with the woman who was dredged up from the lake, Cleo Sherwood.

Maddie begins a job as a journalist, hoping to rise up the ranks despite living in a man’s world, and in this way, she is not unlike Sadie from 11/22/63, a woman who had also split up from her husband when it would have been frowned upon to do so.

Maddie and her police officer lover both attempt to discover the truth about Cleo, although that truth is tangled up in a web of lies, and just as in novels like 11/22/63, they’re put in serious danger due to their meddling.

There’s no time travel in the novel, but if you liked 11/22/63 because of when it was set, then you’ll also enjoy Lady in the Lake.

Orwell published Nineteen Eighty-Four in 1949 – he created a dystopian future based on what he was seeing happen in the world at the time with Cold War tensions. While 11/22/63 brings us back in time in order to stop a potentially harmful future, Nineteen Eighty-Four portrays how wrong that future can go.

Winston works in the Ministry of Truth, where he is constantly asked to rewrite history to present whatever propaganda the state of Oceania wants to depict. He secretly has terrible thoughts about the state and writes them in a diary though it is forbidden, and eventually, he begins an affair with a woman who works in the Fiction Department, Julia.

The pair discuss their hatred for Oceania and what it represents, and though they’re aware they will likely be caught one day and punished for their transgressions, they cannot stop themselves from indulging.

Like in 11/22/63, they’re on a nearly impossible mission to dismantle something that absolutely resists change. While Jake and Sadie are fighting the past, which never wants to be undone, Winston and Julia attempt to fight the system, improbable as it appears to be.

11/22/63 is so unique in premise that there aren’t many novels like it. However, if you liked the love story and the struggles Jake and Sadie face to be together, then you’ll love the above novels. There’s something so special about stories where a group of friends, or a couple fight for or against an entity so much larger than themselves.

Are you looking for more books like 11/22/63? Have any recommendations that didn’t make the list? Let us know in the comments! 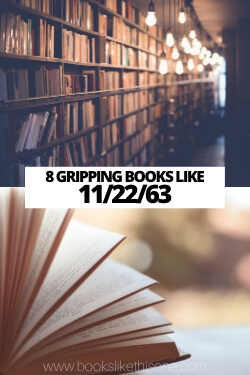