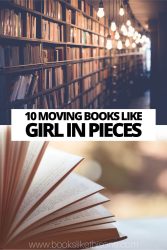 Finding books like Girl in Pieces can seem a bit tricky when you love the novel in question. A poignant and thought-provoking novel about learning to cope when everything gets too much, Girl in Pieces by Kathleen Glasgow is an interesting and heartbreaking read.

We meet seventeen-year-old Charlotte who has gone through much more than most people, let alone those of her age. Following the tragic death of her best friend in an accident, Charlotte is left to fend for herself on the streets without a roof over her head.

Following a failed suicide attempt, Charlotte wakes up in hospital but upon realizing she has no home or person to turn to in her time of need, begins to pick up a blade to relive the internal pain she experiences.

We follow Charlotte along her journey to recovery and to finding the light in life. If you have already read Girl in Pieces, however, you may be looking for a similar book to pick up.

For books like this moving novel about battling with one’s inner self then try one of the books I’ve listed below!

Sam McAllister may look like all the other girls at her school, but under the façade of perfect makeup and hair, she hides her struggle with obsessive-compulsive disorder and the consistent stream of dark thoughts that accompany it.

Determined to keep her diagnosis from those at school, especially her judgmental friends, Sam decides to keep her new friend, Caroline, a secret. Soon, Caroline introduces Sam to a secret basement in their school where the hidden Poet’s Corner club meet.

Hanging out at the Poet’s Corner, Sam finally begins to feel some normality in her life until one realization brings everything falling apart around her. Now she has to navigate her relationships and her life not knowing what is real and what is not.

A gripping and plot-twisting novel about the complexities of the mind, Every Last Word is the perfect book like Girl in Pieces.

A heart-wrenching and beautiful novel about making the most of the time you have comes They Both Die at the End by Adam Silvera which is a great book similar to Girl in Pieces.

Its prequel, The First to Die at the End, is a new release as of October 2022. Set in a world where the organization, Death-Cast, can predict everyone’s death day, we meet Mateo and Rufus. Both boys are called to be told that they have one day left of their lives and decide to meet up to spend one last day together.

Total strangers who become ‘Last Friends’ in an attempt to have one more adventure in life but find something more than friendship, despite knowing it cannot last.

Have you already read this novel? Check out our list of books like They Both Die at the End!

It’s Kind of a Funny Story is a heart-warming and relatable story of confronting your own issues and how the people you meet in life can make the biggest difference.

Craig Gilner is overwhelmed with life, stressed to the max. The pressure to get into an executive high school puts increasing stress as well as his parents who don’t seem to understand his predicament.

After a sleepless night, unable to eat anything, Craig sees no other way out other than suicide. But before he can go through with the act, he checks himself into a psychiatric ward where he meets people in all stages of life going through problems small and big.

This novel is an optimistic yet tragic story that is a wonderful read.

Are We All Lemmings and Snowflakes?, By Holly Bourne

In this book similar to Girl in Pieces, we meet Olive – a girl who suffers from bipolar disorder. She is sent to Camp Reset – a summer camp that aims to be a brain wellness restorative place.

Taking part in therapy and other helpful activities that aim to challenge Olive’s core belief that she is a bad person, she begins to make friends. Throughout this process, Olive devises a plan to cure not only herself but all the other members of Camp Reset.

This plan is not all it seems to be however and soon Olive is spiralling out of control. Are We All Lemmings and Snowflakes? is an honest and empathetic novel. Holly Bourne deals with these sensitive issues with compassion and engages the reader with her wit and imagination.

The book that inspired the popular film, Girl, Interrupted is a story of mental illness and recovery, perfect for fans of Girl in Pieces who are looking for something similar. Susanna Kaysen’s memoir begins in 1967, where the then eighteen-year-old began her stay at McLean Hospital for the next two years.

Known for its progressive treatment for mental illnesses, Kaysen meets all sorts of interesting characters throughout her stay and soon begins to question her own sanity – something we all take for granted.

Girl, Interrupted is a wonderful insight into someone diagnosed with borderline personality disorder as well as the ins and outs of a psychiatric hospital.

Caden Bosch lives two lives. In one, he is a high school student whose increasingly peculiar behaviour is gaining attention from those around him. In the other, he is a ship’s resident artist, heading for Challenger Deep – the Earth’s deepest point in the Marianas Trench.

Documenting the crew’s journey to Challenger Deep through his drawings, he is stuck in between a brewing mutiny and unsure with whose side he should choose. At school, Caden pretends to join the track team as an excuse to escape to his life on the ship.

This tragic and insightful story about escapism and mental health, Challenger Deep is a great book that explores teenage problems.

Under Rose-Tainted Skies, by Louise Gornall

Under Rose-Tainted Skies is a beautiful story of overcoming your fears and is the perfect book like Girl in Pieces.

Nora does not leave the four walls of her home. Period. Terrified of the world outside, Nora stays safely tucked in her comfortable home, watching the real world through her windows or by living through other people’s social media.

Nora is okay with this existence until she meets Luke. Luke doesn’t see Nora as someone with agoraphobia but a girl who is smart, compassionate and hilarious. The two begin a friendship but when a romantic spark lights up between them, Nora’s guilt eats her up.

She wants Luke to have a girlfriend who can explore the world and do everything normal couples do together – like kiss.

Nora realizes she either has to let Luke go or become brave enough to step outside and become the young woman Luke already knows her to be.

We are Okay, by Nina LaCour

Marin up and left her California life without anything but her phone, wallet and a picture of her mother. Since leaving, she hasn’t spoken to a soul from her old life, not even to explain her disappearance.

Now, she is a student in New York and as the dorms empty for the winter holidays, Marin is waiting for her best friend Mabel. Marin has to prepare to explain everything that happened to her friend as well as all of the unsaid feelings they left unresolved between them.

Seeing Mabel is confronting the loneliness that has swallowed Marin whole since leaving her old home.

A short but impactful story, We Are Okay is a wonderful novel for those looking for a book similar to Girl in Pieces.

Libby Strout is dealing with many things: her mother’s death, her father’s heartbreak, her own grief and people’s inability to see anything past her weight. Starting high school is the perfect fresh start that Libby needs. Jack Masselin is unable to recognize faces – even his family’s.

This causes him to keep people at a distance and never let anyone get too close to him. But high schoolers can be cruel so when Jack and Libby are caught up in a game, they end up in group counselling together as well as having to carry out hours of community service.

The pair get closer and soon, realize they are not as alone as they feel. A charming and touching story about friendship and unlikely pairings coming together, pick up Holding Up the Universe for a book similar to Girl in Pieces.

Thirteen Reason Why, by Jay Asher

The book that the Netflix TV Show was based upon, Thirteen Reasons Why tells the story of Clay and Hannah.

Clay Jensen returns home one day to find a package filled with cassettes recorded by his former classmate; Hannah Baker who committed suicide a couple of weeks prior. There are thirteen reasons, Hannah states, that she decided to end her own life. And Clay is apparently, part of one of these reasons.

As Hannah’s story unravels over the tape, Clay follows her footsteps across their small town. This book is dark and tells the worst-case scenario of a girl who didn’t get the help she needed and wasn’t listened to when she needed a listening ear.

Pick up this book like Girl in Pieces if you want something darker and more harrowing than your usual mental health-themed young adult novels.

I hope you found your next read in this list if you wanted something similar to Girl in Pieces! These stories vary from gut-wrenching to heartening depictions of mental health and the effects it can have on the teenage mind, there is something for everyone on this list.

Are you looking for more books like Girl in Pieces? Have any recommendations that didn’t make the list? Let us know in the comments! 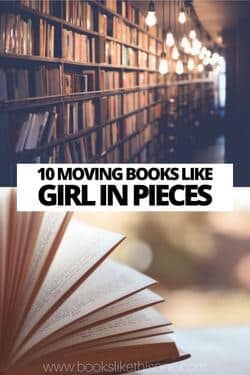