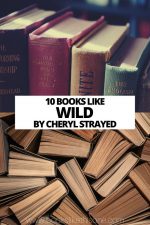 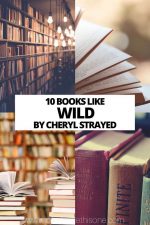 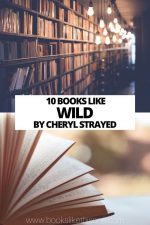 Wild: From Lost to Found on the Pacific Crest Trail by Cheryl Strayed has been one of the most popular travel books over the last decade, leading to many readers searching for more books like Wild once they’ve finished it.

It follows the story of the author who decides, after a period of grief following her mother’s death which led to drug abuse, to hike the Pacific Crest Trail (also known as the PCT). Strayed doesn’t have any long-distance hiking experience when beginning the trail and the story follows her journey hiking across the USA while also flashing back to stories from her life.

Strayed’s story gained even more fame after it was made into a film starring Reese Witherspoon in 2014 where she won an Oscar for her portrayal of Strayed.

Wondering what some of the best books like Wild by Cheryl Strayed are? These ten books are great options to add to your reading list!

Following Davis’ graduation from college, she decides to undertake the hike solo and in her memoir, she shares her experience of hiking solo including both the physical and emotional hardships of the journey.

While the book is predominately about her experiences while hiking, there are some sections of the memoir where she interludes with her religious beliefs. This doesn’t, however, take away from the main story and I wouldn’t let it detract you from reading Becoming Odyssa if you’re searching for more books like Wild because you enjoy reading about people’s experiences on long-distance treks.

Walking the Amazon: 860 Days. One Step at a Time by Ed Stafford

While many people have hiked the Pacific Crest and Appalachian trails, nobody had walked across the Amazon until Ed Stafford. In his memoir, Walking the Amazon: 860 Days. One Step at a Time, Stafford tells the extraordinary story about how for 860 days he became the first person to ever walk the length of the Amazon.

Along the journey, he writes in length about the physical and mental challenges of undertaking his expedition, including his relationships with people that hiked with him for parts of his walk and the encounters with local indigenous tribes.

Walking the Amazon is a must-read for people looking for books similar to Wild and enjoy reading about groundbreaking expeditions!

Love with a Chance of Drowning by Torre DeRoche

Love with a Chance of Drowning by Torre DeRoche is a great option for people looking for more books like Wild because they enjoyed reading about how the author gets thrown into the deep end and adapts to new situations on the road.

DeRoche’s memoir follows the story of how she meets an Argentinian man in a bar one night and eventually decides to join him as he sails across the Pacific. Her story provides interesting insights in both what it is like sailing for somebody who hasn’t done it before and similarly to Wild, the challenges of being isolated.

Into Thin Air by Jon Krakauer

Apart from his other well-known book, Into the Wild, Krakauer is best known for his memoir Into Thin Air, which retells the story of his attempt to climb Mount Everest during the disastrous 1996 season.

In May 1996, 8 people died attempting to scale the world’s largest mountain and Krakauer retells his experience of climbing the mountain as well as sharing his opinions about what factors he believed contributed to the number of deaths that occurred that year.

Into Thin Air received some criticism after it was initially published due to other surviving people not agreeing with his account of what occurred on Everest but nevertheless, Krakauer’s book is a fascinating insight into what it is like to attempt to climb Everest.

A Walk in the Woods: Rediscovering America on the Appalachian Trail by Bill Bryson

Written by one of the world’s best-known travel writers, A Walk in the Woods by Bill Bryson shares his experience of hiking the Appalachian Trail. Not only does Bryson share amusing stories about his time on trail but he also delves into a significant amount of history about the path and the environment.

If you’re looking for more books like Wild by Cheryl Strayed, A Walk in the Woods is a fantastic choice as it provides readers with a fascinating insight into one of the USA’s iconic long-distance hiking trails.

Walking the Nile by Levison Wood

If you enjoyed Wild because of the long-distance hiking then you should definitely check out Walking the Nile by Levison Wood. In his memoir, Wood was aiming to become the first person to walk the length of the Nile by foot.

His book is a fantastic insight into both the physical and mental challenges of attempting to hike a long-distance route that hadn’t been previously completed. He also provides a lot of detail about the countries he is travelling in, aiming to educate readers about the history of the African countries he is visiting, the people he meets and details about explorers that had come before him.

Walking the Nile was also made into a UK TV Series.

Through Sand and Snow by Charlie Walker

Another travel memoir from a British explorer, Through Sand and Snow by Charlie Walker shares the story of how Walker left the UK to cycle to the further points in Europe, Asia & Africa.

Similarly to Wild, Walker didn’t have much of a plan when he set out initially and the aim of his trip was simply to get out of England and live an unconventional life.

His journey shares a lot of detail about how he learns to deal with the challenges of being on the road. In particular, he shares with readers the emotions that he goes through especially during long periods of isolation.

Through Sand and Snow is undoubtedly a great option for readers looking for more books like Wild!

Let’s Take the Long Way Home: A Memoir of Friendship by Gail Caldwell

Let’s Take the Long Way Home by Gail Caldwell shares the story of her friendship with fellow writer Caroline Knapp.

Her memoir goes into detail about the personal hardships that both women faced and how by taking long walks in the woods and rowing, they were able to build a deep and close friendship. Similarly to Wild, both women had some personal demons that they were trying to work through and were drawn to the outdoors.

While this memoir might not focus on the outdoors elements, it’s definitely worth a read for fans of Wild.

Originally from Kentucky, Claiming Ground tells the story of how Bell left her home to begin a career of sheepherding in rural Wyoming in the 1970s. She goes into great detail about what life is like for a woman doing a job that is traditionally considered men’s work and how she eventually finds a home amongst the community.

While once again, not a traditional travel book, Claiming Ground shares many similarities with Wild in the way both authors deal with being put into a new environment and the struggles of solitude.

On the Road by Jack Kerouac

Rounding off this list of books like Wild is one of the most quintessential travel books – On the Road by Jack Kerouac.

Originally published in 1957, it tells the story of how the narrator, Sal Paradise, sets off on a road trip across the USA where he meets Dean Moriarty. The novel focuses on some of their shared adventures, going into great detail of the post-WWII generation and the impact that drug use and jazz music had on society.

While published as a piece of fiction, On the Road is based a lot on the author’s life and is considered one of the most defining pieces of work of that era.

Wild by Cheryl Strayed is a modern favourite amongst lovers of travels memoirs and hopefully there books like Wild provide you with some ideas on what to read next!

Are you looking for books similar to Wild? What would you add to this list? Let us know in the comments below! 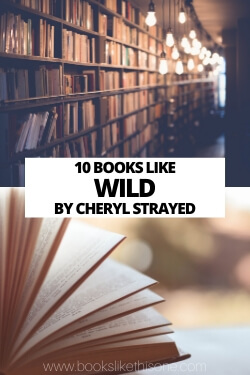