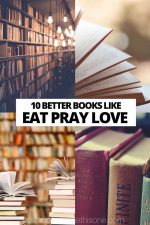 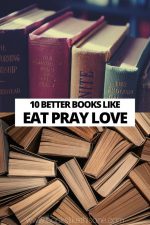 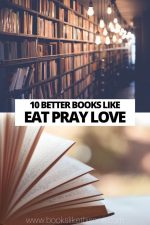 Eat, Pray, Love: One Woman’s Search for Everything Across Italy, India and Indonesia by Elizabeth Gilbert is an international bestseller that was famously made into a Hollywood movie starring Julia Roberts. It’s an autobiographical memoir which follows Gilbert as she finds herself being increasingly disillusioned with life in the USA and decides to leave it all behind to go travelling in Italy, India and Indonesia. As a big fan of travel memories, I found this book to be a disappointing read and think that are a number of betters books like Eat Pray Love if you’re after a great travel memoir.

Here are ten of my favourite books like Eat Pray Love that will be sure to inspire you to go travelling soon!

Wild: From Lost to Found on the Pacific Crest Trail by Cheryl Strayed

Wild by Cheryl Strayed follows the story of the author who, after losing her mother and dealing with the of a painful divorce, decides to the hike the Pacific Crest Trail with no long-distance hiking experience. The book is expertly written as it flashes between her experience on the trail and her previous life stories that led to her beginning this expedition.

Strayed’s story shares some similarities with Gilbert’s in Eat, Pray, Love, however, I think Wild is an overall more enjoyable read and much more interesting from a travel and hiking perspective. Wild was also made into a feature film starring Reese Witherspoon where she was nominated for an Oscar for her portrayal of Strayed.

If you’re already read this, make sure to browse our books like Wild list for even more recommendations!

Love with a Chance of Drowning by Torre DeRoche

Love with a Chance of Drowning by Torre DeRoche is another fascinating memoir of how DeRoche followed her heart after falling in love with an Argentinian man who she met on a night out in San Francisco. DeRoche, an Australian who was working in the USA, meets Ivan, who is planning an expedition to sail the Pacific.

With no prior sailing experience, DeRoche joins Ivan on his expedition with the story providing a fascinating insight into the challenges of sailing around the world as well as the impact on personal relationships while being stuck in a confined space!

Love with a Chance of Drowning is undoubtedly a great read if you’re looking for more books like Eat Pray Love.

The Good Girl’s Guide to Getting Lost by Rachel Friedman

The Good Girl’s Guide to Getting Lost: A Memoir of Three Continents, Two Friends, and One Unexpected Adventure by Rachel Friedman is another travel memoir that retells the story of how Friedman who, in a spur of a moment decision, buys a ticket to Ireland and meets an Australian girl who convinces her to begin a yearlong trip around the world. They then proceed to travel together across Australia and South America.

The Good Girl’s Guide to Getting Lost showcases how Friedman falls in love with travel and how it manages to change her. While the travel aspects of the book might not be as interesting to seasoned travellers, it’s still a great memoir and a good option if you’re looking for similar books like Eat Pray Love.

Under the Tuscan Sun by Frances Mayes

One of the most quintessential travel memoirs, Under the Tuscan Sun by Frances Mayes, was published in 1996 and tells the story of how Mayes decides to move to Tuscany, Italy.

In Tuscany, she begins restoring an abandoned villa and falls in love with the countryside and culture of the region. She also utilises her experience as a chef to share detailed stories and recipes about the region’s fantastic food.

Under the Tuscan Sun was also made into a movie in 2003 starring Diane Lane, however, there are significant differences in the movie’s story compared to the book.

The Year of Living Danishly by Helen Russell

The Year of Living Danishly: Uncovering the Secrets of the World’s Happiest Country by Helen Russell tells the story of how Russell, a native Londoner, learns about how Denmark is the happiest country in the world and decides to move there for a year to try and understand what is behind the Danes being so happy.

The Lost Girls by Jennifer Baggart

The Lost Girls: Three Friends. Four Continents. One Unconventional Detour Around the World by Jennifer Baggart is another great travel memoir about leaving behind conventional life to pursue travel.

Baggart and two of her friends make a decision to quit their job as their thirtieth birthdays approach and undertake a year-long trip around the world. Their trip takes them to Australia & New Zealand, South America, Asia and Africa as they get truly outside their comfort zone and test the limits of their friendship.

The Lost Girls is a great read for people who have dreamt about going on a similar year-long trip and is an incredibly easy read.

Into The Wild by Jon Krakauer

While some of the above travel memoirs undoubtedly have more similarities to Eat Pray Love, Into The Wild by Jon Krakauer is a great option if you’re looking for a travel story where the protagonist truly leaves everything behind to go travel.

Into The Wild follows the story of Christopher McCandless who after graduating college decides to give all his savings to charity, get rid of most his possessions and hit the road. The story follows McCandless as he travels across the USA, meeting other travellers before eventually going to Alaska where he aimed to live entirely off the land.

Into The Wild is one of the most popular travel memoirs (there are also many other great travel books like it!) and was made into a hit movie in 2007 which was directed by Sean Penn. It is undoubtedly a great option if you’re looking for more books like Eat Pray Love.

The Alchemist by Paulo Coelho

Another perennial favourite amongst travellers, The Alchemist by Paulo Coelho is a story about a young shepherd named Santiago who has a vivid dream about how treasure awaits him and then leaves his life behind to begin travelling and searching for the treasure.

It’s a short read but the are many similar themes that make this story a great read if you’re looking for books like Eat Pray Love. You’ll also thoroughly enjoy The Alchemist if you like stories with a number of philosophical elements such as Shantaram by Gregory David Roberts.

Tales of a Female Nomad by Rita Golden Gelman

Tales of a Female Nomad: Living at Large in the World by Rita Golden Gelman is another interesting travel memoir about a woman leaving her life behind to go travel the world.

At the age of 48, Gelman leaves her life behind in Los Angeles to become a nomad travelling the world. Her journey takes her across a number of continents including Africa, Asia and the Americas as she aims to dig deep into the culture and make local connections.

It also brilliantly showcases how she evolves both as a traveller and a person over the years. This makes Tales of a Female Nomad a great book if you’re looking for a similar read to Eat Pray Love.

It follows her story as she undertakes the hike including going into great detail about all the physical and emotional challenges of undertaking such a gruelling hike.

There is also a wide array of interesting people that she meets along the trail that makes Becoming Odyssa an enjoyable read and a must if you’re looking for more books like Eat Pray Love.

Eat Pray Love is one of the most popular travel memoirs of recent times, however, there are a number of other great books like Eat Pray Love that will undoubtedly inspire you to hit the road soon!

What are your favourite books like Eat Pray Love? Have we missed any on our list? Let us know in the comments below! 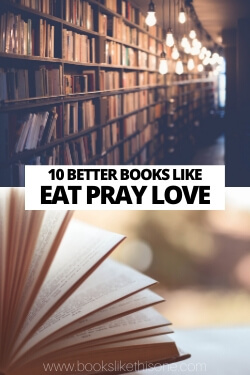