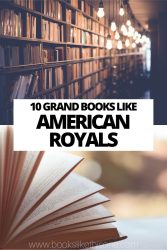 If you love being transported into an alternate history with lots of romance, then you will love books like American Royals.

Imagine a world where America has a royal family, with George Washington being the first king. Now, over 200 years later, the country will soon have its first reigning queen.

While Princess Beatrice continues her duties to perfection, her parents decide it’s time to find her a future husband to help lessen the loneliness of her position. However, she doesn’t feel like she needs a man to do her job right.

With so many secrets and blooming romance, this book is sure to deliver greatness. Continue reading for more books like American Royals.

As the second book in the American Royals series, Majesty continues where the first book left off and America has its first queen.

The four main characters have to adjust to their different circumstances and navigate their part in the royal family or their relation to it.

Princess Beatrice, now Queen Beatrice, is being pulled in all directions but is not being treated like a King would be but more like a person who isn’t capable of managing her responsibilities. While she’s fighting for her given rights and respect, she is also working on getting to know the fiancé her father had chosen for her.

Princess Samantha is royally struggling in her new position and is trying to clean up her image, as well as having a potential new love interest.

Her best friend, Nina, is trying to get over Prince Jefferson by focusing on her studies and realises his friend might be the perfect distraction. Daphne continues to scheme to win the prince back so she can become princess one day and things seem to be going her way.

With all the stories twisting in different ways, a big event will be sure to bring them all back together.

The Royal We, by Heather Cocks and Jessica Morgan

When Rebecca, or Bex, moves from America to England to attend Oxford University, she is shocked when she learns that Prince Nicholas lives a few doors away.

At Oxford, Nick is safe from the paparazzi and can freely party with his small group of friends, who take his wish for privacy seriously, but he still struggles with knowing who to trust. Except with Bex – he knew instantly she was trustworthy and special.

When the two start dating, it seems so easy between them until they are out of their bubble and the public starts to question their “friendship.”

Bex has to figure out how to ignore the tabloids and disapproval of the royal family. Nick also has to stop worrying so much about the outside world and their image before the two walk down the aisle.

Will they be able to overcome all the obstacles and become The Royal We?

The Seven Husbands of Evelyn Hugo is a historic fiction that tells the story from start to finish of one of Hollywood’s royals.

Evelyn has never spoken openly to anyone about her scandalous life, so it’s a surprise to everyone when she chooses Monique Grant, an unknown reporter, to write her biography.

Although Monique doesn’t understand why she was chosen, she knows how important this opportunity is for her career and in the process she also learns to love Evelyn.

Books similar to American Royals have strong female characters, like Evelyn, who sometimes have to hide who they are to protect those they love.

While everyone wants to know about Evelyn’s seven husbands, her real story is much more than anyone could have imagined. And Monique is one of the first people to get the real Evelyn, but she won’t be ready to hear how she’s connected to the iconic blond.

I Am Not Your Perfect Mexican Daughter, by Erika L. Sanchez

Similar to books like American Royals, I Am Not Your Perfect Mexican Daughter demonstrates the pressure some people have to deal with when their parents push them to be “perfect.”

After Julia’s older sister Olga’s death, Julia sees her parents crumble without their eldest daughter. Julia feels the heavy responsibility to put her family back together but doesn’t know how to be as perfect as her sister.

Little does she know that Olga had her secrets that would make her mom pray for days. In her own depression, Julia is determined to discover who her sister really was for the sake of her sanity and peace.

The Spring Girls, by Anna Todd

As a modern retelling of Little Women, The Spring Girls centres around the four Spring sisters just like in the original classic but set in the twenty-first century.

While their father is in Iraq, the girls and their mom live in the military base in New Orleans where they wait patiently for his safe return.

Meg is working as a makeup artist but dreams of being an officer’s wife. Jo is finishing high school and can’t wait to move away and explore New York to start a career in journalism. Beth is afraid to leave the house and does everything for everyone but she enjoys it. Amy doesn’t like being the youngest and is trying to grow up sooner than she should.

No matter how much they might fight with each other, the girls are always there when one needs help. Their strong family bond is similar to books like American Royals.

If you loved Little Women then you will have fun imagining the sisters in today’s world without the corsets or long dresses.

Avery had spent her life dreaming of the day she would run her family’s hotel and event space, Spark House. She loves every part of her job, especially working with her sisters.

Although she doesn’t have any romance in her life, she still feels happy living with her best friend, Declan, playing soccer with the guys and working on growing Spark House.

That is until she is in a car accident that leaves her with some broken bones and she must rest at home for weeks until she recovers. For once she must trust others with her responsibilities both at home and at work.

After almost losing her, Declan takes it upon himself to be Avery’s caretaker. Although they’ve both friend-zoned each other for so long, the intimacy they share might lead them to give in to their secret attraction, especially When Sparks Fly.

The One & Only, by Emily Giffin

In The One & Only, Shea has so much pride in her town that she has never considered leaving Walker, Texas.

Growing up she idolised her best friend’s dad, the college football coach, and her admiration hasn’t stopped – not even at 33 years old. Since she works in the sports department of the same college, Shea looks for guidance from Coach Carr when she starts to feel stuck in life.

Shea loves football and writing, so when she gets a job covering Walker College’s sports for the Dallas Post, it seems like a dream come true.

Now that she has a dream job and starts to date the star quarterback for the Dallas Cowboys, things should be perfect, right? But the star player isn’t as perfect as he pretends to be in public and Shea can’t stop thinking about Coach Carr.

Like Nina from American Royals, Shea must stop fighting with her feelings and must do what is right for her instead of trying to protect everyone else. If she can listen to her heart for once then it might lead her to true happiness.

I’ve Got Your Number, by Sophie Kinsella

In I’ve Got Your Number, the day Poppy is supposed to meet her future in-laws is the day she loses her engagement ring, which was passed down three generations, and her phone gets stolen.

Luckily for her, someone left their phone in the trash and she decides to borrow it until the owner comes looking for it if they even want it back. Now the hotel where she thinks she lost her ring can contact her if they find it.

Unfortunately, the owner of the phone, who Poppy finds out is named Sam, wants it back. Poppy promises to give it back as soon as she finds her ring and proposes to be his assistant for the time being. She’s also having fun reading his messages.

Similar to Princess Beatrice and other characters in books like American Royals, Poppy will have to find out that no matter how hard you prepare for something, life can find ways to surprise you. Maybe losing the ring wasn’t such a bad thing.

The Wedding Date, by Jasmine Guillory

Would you consider ending in a stuck elevator with another person as a sign?

In The Wedding Date, during a power outage Drew and Alexa get stuck in an elevator but as they get to know each other it doesn’t seem like that bad of a situation.

Drew decides Alexa would be the perfect fake girlfriend and date to take to his ex-girlfriend’s wedding. For Alexa, this could be a chance to get out of her comfort zone and her office to live a little.

The two have a great time at the wedding, but it doesn’t end there. Their one-night stand turns into a long-distance romance, but moving so fast can also lead to a quick burn.

Bringing Down the Duke, by Evie Dunmore

Let’s go back in time to 1879 England. Back to a time when the first group of women were allowed to study at Oxford and the women’s suffrage movement was slowly rising.

In Bringing Down the Duke, Annabelle is part of this group of women fighting for their rights while trying to obtain a higher education.

As part of the movement, Annabelle is assigned to the Duke of Montgomery, Sebastian Devereux. She must get him to be an ally to help steer the votes in the movement’s favour but that may be a bigger challenge than she expected considering her attraction to him.

Annabelle has never backed down from a challenge so she will have to find a way to bring the duke down.

Whether you’re royalty or not, the theme of strong, independent women that runs through this list of books similar to American Royals will inspire you. And if you enjoy an unexpected love story then these 10 books will be the fitting jewels for your crown.

Are you looking for more books like American Royals? Have any recommendations that didn’t make the list? Let us know in the comments! 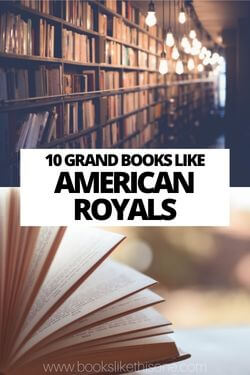