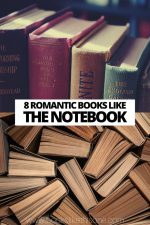 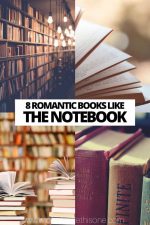 This wonderful story by Nicholas Sparks is about the one that got away and how they remain in our hearts no matter where life takes us. Luckily, for the main characters in books like The Notebook, fate often has a way of giving them a second chance.

The Notebook begins with an elderly man ‘Duke’ reading pages of a story from a notebook to an elderly woman.  He reads to her about Noah Calhoun who came back from WWII still dreaming of Allie Nelson, the girl he met one summer when he was nineteen.

Luckily, Noah has the distraction of working on restoring his family home and a new relationship but when Allie resurfaces in his life his world is turned upside down.

Allie is with Lon now but she needs to know why Noah didn’t reply to any of her letters. This is the crisis point when they both realise that someone else had a hand in keeping them apart.

Apparently, when Sparks sold his book, the first thing he did was to buy his wife a new wedding ring and ask her to marry him – again. Bless.

If you’re captivated by the romance in novels like The Notebook and need more in your life, then read on as your search is over.

Letters to the Lost, by Ioana Grey

This book like The Notebook lets us in on the intimate letters of a soldier who is in search of a girl he met during WWII.

Letters to The Lost is set in London and begins with a young woman (Jess) running from her abusive boyfriend. She eventually finds sanctuary in a dilapidated house down a quiet lane.

Whilst looking around the house, she finds a recent letter postmarked from America; it was addressed to Mrs S Thorne. Jess is curious about the letter and opens it. It’s from a US soldier called Dan who is in search of Stella, the girl with whom he had a brief, but significant, affair.

After finding more letters from Dan from seventy years ago, Jess decides to find out what happened to these star-crossed lovers but she is discovered in the house by heir hunter, Will. She tells him of the letters and together they begin their own story alongside Dan and Stella’s.

Letters to the Lost is a powerful, emotive love story similar to The Notebook that is well written and well worth putting on your wish list.

Sometimes we are just meant to be someone and in this book like The Notebook ‘meant to be’ takes on a whole different spin.

In Five Years follows Dannie Cohan who is a straight-up lawyer with a life plan. She knows what she wants to achieve and how she sees her life panning out for the next five years.

At the beginning of the book, Dannie’s right on track with her plan, ticking off her list nicely. She has the career she wants and the relationship. Her life is perfect.

Until a time glitch has her waking up five years in the future sleeping next to a man she has never met before and wearing a ring on her finger.

Although the experience seemed real, Dannie chooses to ignore it until years later when she bumps into the man from her dream.

If you’re a great believer in ‘the one’ and enjoy books like The Notebook, then check out In Five Years.

In this story of love similar to The Notebook, we travel to the Greek island of Cephalonia in the Second World War, before Benito Mussolini invaded Greece.

When the Italians invade the island, Captain Antonio Corelli, the officer in command of the Italian garrison, falls for Pelagia whose father is the local doctor. She is already engaged to a local fisherman who has gone to join the Greek partisans. This, and the fact that it’s wartime and they are fighting on opposite sides of the war, make it a complicated affair.

The lovers have to find a way through the political and personal repercussions of their relationship as the atrocities increase and the effects of war touch every aspect of their lives.

Captain Corelli’s Mandolin is a love story and a history book that will have you weaving in and out of every emotion you have to leave you spent but satisfied in the knowledge that you’ve just read a beautifully written novel.

Atonement is a story spanning sixty years and is written in three parts. The first is set during WWII and is traditional in style but McEwan has veered towards a more modern structure as the book and timeline progress.

It begins in 1935 when Briony Tallis mistakenly interprets her older sister (Cecilia)’s flirtation with the son of the gardener (Robbie Turner) as something more than it is. At the age of thirteen, her perception of sexual matters is somewhat skewed and not fully understood.

Briony’s adolescent imagination begins a series of events which will rip at the core of her family and change her life forever.

If you are searching for more books like The Notebook then Atonement will have you squirming uncomfortably but you still won’t be able to put it down.

The Princess Bride by William Goldman

For a more light-hearted look at love, I’m steering you to The Princess Bride. Originally published in 1973, it’s a fantasy romance that takes all the ‘good bits’ from S. Morgenstern’s classic work.

Apparently, when Goldman’s father used to read the original to him, he only read what he thought to be the best bits which later prompted William to rewrite the story around those parts his father read to him.

The story begins when a grandfather reads a story to his grandson; the story comes alive as he reads…

… Buttercup is reluctantly engaged to the loathsome Prince Humperdinck and is kidnapped by bandits with the aim of starting a war. The boy from her childhood, (Westley) who she thought was dead, comes to her rescue.

On the way to save her, Westley forms unlikely alliances including a giant and a swordsman who become his travelling companions.

So, if you enjoy books like The Notebook and need some adventure, sword fights, hilarity, unusual beasts and revenge with your next romance read, then get stuck into The Princess Bride – and then go and watch the film; both excellent!

The Italian Villa, by Daniela Sacerdoti

Part of this book like The Notebook is also set in WWII in the form of a diary found by our main character, Callie. She is a waitress in a small Texan town and discovers that her birth mother has left her a villa in Italy.

Callie decides to visit the villa and finds a dusty old journal. She reads about her mother, Elisa’s romance with her sweetheart, Leo.

Inspired by her mother’s entries in the diary, Callie is encouraged to embark on her own adventure of discovery in the hillside of Montevino.

Unfortunately, the final pages of her mother’s journal expose a shattering betrayal that leaves Callie shell-shocked.

The author manages to make you feel every breeze and experience every scent in the air as Callie discovers the people and places about her hillside villa. If you’ve always wanted to visit Italy, you could acclimatise with The Italian Villa.

Call Me by Your Name, by Andre Aciman

For my penultimate selection of awesome books to read, this romance similar to The Notebook is about that first love, the one we’ll always remember. It follows a journey of sexual and emotional discovery between a teenage boy and a guest staying at his parent’s house on the Italian Riviera.

Elio is curiously captivated by Oliver, who he regards as mature and sophisticated. The story follows their interactions and the confusion Elio feels at not only his intense desire for Oliver but the strong emotional connection he feels towards him.

The story of their romance is told through Elio’s internal dialogue providing an intimate narration of his thoughts and desires.

Call Me by Your Name was made into a film in 2017 and subsequently nominated for four Oscars but I urge you to read the book first.

Have you already read this novel? Check out our list of books like Call Me by Your Name!

The Lucky One, by Nicholas Sparks

I’m bookending this selection of wonderful novels like The Notebook with another Nicholas Sparks romance. This time it’s The Lucky One; a tale about a US Marine who is convinced that a photo he found of a young woman during his deployment, holds the key to his destiny.

After a run of good luck, including escaping death, he decides to look for the woman in the photo on his return home. He sets off to locate the mystery woman in the photograph with his dog, Zeus, and finds himself in North Carolina where he meets Elizabeth (Beth) Green who is divorced with a son.

We follow the story of Logan from three perspectives; Logan, Elizabeth, and Keith Clayton who we meet at the beginning of the book and holds the secret to the photograph and wants Logan out of the picture.

This is another Nicholas Sparks novel that was adapted for film but as always…read the book first!

There should be enough wonderful books like The Notebook in the above list for you to indulge your romantic fantasies; whether the setting is during the horrors of war or on an Italian hillside. It’s all here for you.

Are you looking for more books like The Notebook? Have any recommendations that didn’t make the list? Let us know in the comments! 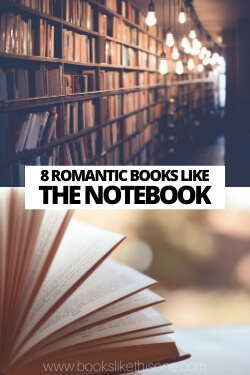