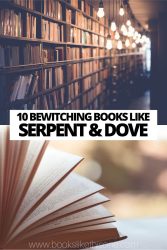 Books like Serpent and Dove transport you into magical places where you meet characters who possess power beyond our imagination. Fantasy books like those I list below allow us to indulge in these fantastical worlds and escape the mundane lives we live.

In this book, we meet Louise Le Blanc who fled to the city of Cesarine after her coven turns on her. Living off scraps and unable to use her magic, Louise is left living a life in hiding – from her coven and the Church who would both see her dead.

Chasseur Reid Diggory has sworn an oath to the Church and his main principle in life is to see all witches burned. The two never thought their lives would intertwine until fate places them together in the most intimate way: marriage.

Attempting to ignore their growing feelings, Lou knows she cannot change the fact she is a witch and she still has enemies after her. She must make a choice but the wrong one could be the end of Lou and the end of life as they know it. This book contains forbidden romance, enemies to lovers and everything in between.

If you’ve read Serpent and Dove and you are desperate for a similar title, keep reading!

A Curse So Dark and Lonely, by Brigid Kemmerer

In this retelling of The Beauty and the Beast, Prince Rhen is cursed to relive the autumn of his eighteenth birthday until he finds true love. It seems a simple task until he turned into a bloodthirsty beast and murders his family, friends and destroys his home.

Rhen has taken to pulling random women from the streets of Washington, DC after realizing no one in his realm was willing to love him. After trying to save another woman from kidnapping, Harper finds herself in a magical realm as somewhat a prisoner. As Harper spends more time with Rhen and begins to realize what is at stake, there is hope for Rhen once more.

If you love the enemies-to-friends-to-lovers trope and a heroine from our own world, then A Curse So Dark and Lonely is a great replacement for Serpent and Dove.

From Blood and Ash, by Jennifer L Armentrout

Similar to Serpent and Dove, this book finds the heroine being unwillingly pronounced the ‘chosen one’. Poppy was chosen at birth to begin a new era as a Maiden. It is a lonely life with no partner and no choice.

Hawke, the handsome guard who is duty-bound to her side, catches Poppy’s attention and as a God-forsaken kingdom arises again, her world is crumbling around her and everything she ever knew is fading.

For a book like Serpent and Dove that explores the difficult choice between duty and the heart, From Blood and Ash is perfect.

If you’re on the hunt for books like Serpent and Dove, then These Witches Don’t Burn has all the witchcraft and magic you desire!

Hannah is an elemental witch living in Salem, Massachusetts and spends her time hiding her magic from non-witches (Regs), avoiding her fellow elemental ex-girlfriend and hanging out with her best friend.

When a blood ritual stops her school’s end of year bonfire and dark magic begins to show all around town, Hannah is forced to team up with her ex, Veronica, to prove to their coven there’s an evil blood witch in town.

In between all this, Hannah meets the cute new girl ballerina and suddenly, balancing her two lives gets trickier and trickier.

Once a year, far from the tiny island Scarlett calls home, a performance is held where the audience participates named Caraval.

This year, Scarlett’s cruel father has arranged a marriage for her but she is saved when her long-awaited invitation to Caraval arrives.

Whisked away from her home, her sister, Tella, is kidnapped and it is announced that the first to find her wins the game. Despite knowing it is all an elaborate performance, Scarlett finds herself walking the line between reality and fantasy. Now, she has five nights to find her sister before she disappears forever.

For a book like Serpent and Dove jam-packed with magic and mysterious characters, take a good look at Caraval.

When Jude was seven, her parents were brutally murdered in front of her and she was taken to live in the High Court of Faerie with her two sisters. Growing up in a realm where humans are despised meant that Jude wants nothing more than to fit in despite her mortality.

Determined to get a place in court, she must defy the cruel Prince Cardan – the youngest son of the King. Jude finds herself getting more and more involved in the palace’s violence and deceit until she is risking her life to save her sisters and the entirety of Faerie itself.

Similar to Lou in Serpent and Dove, in The Cruel Prince, Jude finds herself at the centre of events that will determine its salvation or downfall.

Kingdom of the Wicked, by Kerri Maniscalco

Emilia and Vittoria are twins and also streghe: witches who live among humans in secret.

When Emilia finds her sister dead and her body mutilated beyond belief, she sets out on a quest for answers and revenge even if it means using dark magic that’s been forbidden for years.

On her hunt for the killer, she meets Wrath – a prince of Hell who she has been warned about since she was a child. Wrath insists he is on her side and that he is investigating the murders of the women but Emilia knows the Wicked are never what they truly seem.

For a murder mystery full of romance and magic, Kingdom of the Wicked is the perfect replacement for Serpent and Dove.

Not the Witch You Wed, by April Asher

If you want a more lighthearted rom-com book similar to Serpent and Dove, then Not the Witch You Wed is right up your street.

Magicless witch Violet Maxwell would never willingly go near alpha wolf shifter Lincoln Thorne, especially after breaking her heart. However, when old supernatural laws force the two together again, they find themselves in a fake dating scenario.

As old and new feelings arise, Violet’s magic makes a reappearance and the pair realize they have a bumpy ride ahead of them before they can truly settle down.

Two hundred years ago, three sisters were sentenced to death by drowning for witchcraft in the town Penny lives in. Like most of the locals, she has accepted that every summer the three sisters return for their revenge by luring boys into the depths of the water.

The day before the sisters are meant to return, Bo Carter turns up with no idea what he has walked into. The townspeople are mistrusting and soon Bo and Penny are suspicious of one another. Only Penny can see what the others cannot and must make a choice: to save Bo or herself.

Try The Wicked Deep for an eerily beautiful and atmospheric book like Serpent and Dove!

The Bone Witch, by Rin Chupeco

For those of you looking for a little less romance than Serpent and Dove but still want a witchy paranormal story then The Bone Witch is the best pick for you.

Tea comes from a long line of witches but when she accidentally resurrects her brother, Fox, she realizes how different she truly is. A bone witch is someone who practices necromancy and in Tea’s world they are shunned from society.

Tea and Fox are taken in by an older bone witch who travels with them to another land to train and improve her powers.

Tea begins to learn how to become an asha – an elemental witch – but danger is approaching fast and she needs to learn far quicker than time will allow her.

Alessandra has a plan and that plan is to woo the king, marry him then kill him. Long live the Queen.

The Shadow King has only just been crowned and attempts are being made on his life left and right. Soon, Alessandra finds herself saving his life in order to keep him alive long enough to make her Queen.

She is tired of being overlooked but no one truly knows the extent of the Shadow King’s powers. Determined to get what she deserves whilst trying to deny the growing feelings she has towards the man; will Alessandra take the throne for herself or will she have to share it?

Similar to books like Serpent and Dove, we see a deadly rivalry grow into something more in The Shadows Between Us.

Reading books like Serpent and Dove can transport you into another realm entirely full of magic, action and romance. We sometimes read books like these to escape our own reality and live vicariously through the characters and I guarantee that’s what you’ll get with all the books above!

Are you looking for more books similar to Serpent and Dove? Have any recommendations that didn’t make the list? Let us know in the comments! 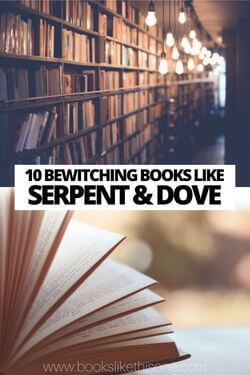