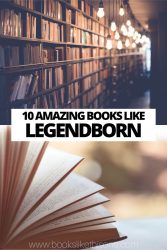 Books like Legendborn are jam packed full of magic, monsters and thrilling action that leave you yearning for more stories that excite you in such a way.

Bree Matthews has gone through a lot at the ripe age of sixteen. Left on her own after her mother dies in a sudden accident, Bree resolves to run away from the life she once knew. Now at a residential program for high schoolers far from her home, it seems like the perfect escape from reality.

But that comes much truer after witnessing a flying demon attack someone on her very first night.

Soon, she finds out about the secret society of students who call themselves Legendborn who hunt down these demons.

When a boy who calls himself Merlin attempts (and fails) to make Bree forget about the incident by wiping her memory, her instead triggers a different and forgotten memory to resurface surrounding her mother’s tragic death.

Equipped with a magic of her own, Bre infiltrates the Legendborn in a quest to find out the trust about the circumstances of her mother’s death.

If you, like me, have already read Legendborn and are looking for a similar story to move onto next, here are some ideas for you!

Ace of Spades, by Faridah Abike-Iyimide

Unlike Legendborn, which pulls upon fantasy elements, Ace of Spades is a thriller set in a non-magical world. But don’t let that stop you from picking up this beauty!

Similar to Legendborn, this story is also set a school – Niveus Private Academy, a school for the rich, the powerful and the perfect.

However, the idyllic atmosphere of the school is tampered with when an anonymous texter named Aces comes out with a brutal aim of revealing two students’ dark secrets.

Devon is a musician whose private photos are leaked by Aces and Chiamaka is the school’s perfect head girl until the truth surrounding her ascension to power is released into the student body.

Someone hiding behind anonymous texts is planning something much bigger than a bitter high school game.

A dark and vicious mystery, this is a must-read!

Cinderella is Dead, by Kalynn Bayron

A dark twist on the fairytale classic, Cinderella is Dead is set in a world 200 years after the original story where Cinderella found her prince.

Now, teen girls are required to attend a ball where men will select their future wives based on the girls’ displays of finery. However, the girls not chosen are never heard from again.

Sixteen-year-old Sophia would rather marry her best friend Erin than any man in the ballroom, no matter his looks or riches. So, when she is sent to the castle, she makes a run for it.

Hiding in Cinderella’s mausoleum, she meets Cinderella’s descendant, Constance, and her steps sisters. There, in the dark, they vow to bring down the king forever and, in the process, they discover there is more to Cinderella’s story than they ever realized and it wasn’t such a fairytale after all.

In this book similar to Legendborn, we see the protagonist infiltrate an organization of sorts in order to discover a dark and grim truth.

City of Bones, by Cassandra Clare

City of Bones is the bestselling first novel in The Mortal Instruments series and this fantasy adventure has something for everyone!

Like in Legendborn, we meet an ordinary girl who is thrust into a magical and dangerous situation when something devastating happens to their mother. Clary Fray begins to see things others don’t like when she witnesses a murder in plain sight that no one else can see.

Then, her mother disappears and soon, Clary finds out she is descended from a line of demon-hunting warriors also known as Shadowhunters.

Serpent and Dove, by Shelby Mahurin

Louise Le Blanc lives in the city of Cesarine, hiding far from the coven of witches with whom she grew up and yet who also wish her dead, including their leader, Louise’s mother. But in Cesarine, magic is feared and witches are burned at the stake so Louise has forsaken the magic that runs in her veins in order to live.

But denying what you truly are has a way of catching up to you and soon, Louise finds herself married to Reid Diggory, a chasseur.

Chasseurs are soldiers sworn to the church whose only purpose is to kill witches. With her past catching up to her and feelings for Reid growing every day, Lou is stuck between the man she loves and saving her people.

With the fate of the world and her heart at stake, Lou has a journey ahead of her. A beautiful, exciting book, Serpent and Dove is perfect if you’re looking for your next read.

Why not pick up Daughter of Smoke and Bone if you are looking for an urban fantasy similar to Legendborn?

In this novel, we meet Karou — an art student in Prague — whose bright blue hair is peculiarly natural. Karou is always disappearing and her sketches of monsters keeps others away.

But when black handprints being to turn up around the world scorched onto doorways by mysterious, winged creatures, Karou finally gets some answers about who and what she is.

Joined by Akiva, Karou is sent on a journey of self-discovery and saving the world.

Twilight is the classic vampire romance that shook the world, so why not pick it up if you haven’t read it already?

When Bella Swan moves to Forks, Washington halfway through her junior year of high school, she finds herself falling in love almost immediately. The handsome Edward Cullen is hiding something, a secret that his whole family keeps.

After saving her from certain death, Bella can’t deny that Edward may be more than human but entering his fantasy world will invite more danger than she could ever believe to enter her life.

Another classic urban fantasy that is perfect for fans of Legendborn who love a good romance.

On the island of Fennbirn, every generation there is a set of triplets born. Each triplet has an equal right to the throne and a magical power. Mirabella is an elemental; Arsinoe is a naturalist; Katharine is a poisoner.

Each raised separately where they grow and nurture their powers until their sixteenth birthday. When the girls turn sixteen, the battle for the throne begins, a battle of life and death that only ends when there is one queen and one sister left standing.

Three Dark Crowns is a perfect read for fans of Legendborn which combine family and magic.

Once Upon a Broken Heart, by Stephanie Garber

Evangeline Fox has believed in true love and happy endings ever since she could remember. She has loved Luc Navarro for years but when she finds out he is to marry another – her step-sister, Marisol – it is the biggest surprise and her biggest heartbreak.

Desperate to stop their union, Evangeline makes a deal with the Prince of Hearts, in exchange she must give three kisses in the time and place and person of his choosing.

Soon, she realizes she is a pawn in a bigger game and that making a deal with the Prince of Hearts is the most dangerous thing she could have done.

Once Upon a Broken Heart is a compelling, thrilling and magical novel that is perfect for lovers of Legendborn who want something more whimsical.

Theodosia watched her mother, the Fire Queen, die in front of her when she was six as her country was invaded by the Kaiser. Dubbed the Ash Princess, Theodosia is subjected to wear the title as a reflection of her life as a prisoner of the Kaiser.

A prisoner within her own home and forced to watch her citizens become enslaved, she realizes something must be done to reclaim her country.

A compelling fantasy, Ash Princess is a great book like Legendborn with its protagonist whose plot begins with her mother’s death.

Every 100 years, the rulers of the six realms are invited to play in a deadly game named the Centennial.

Summoned to the Centennial, the six rulers have one last chance to break the deadly curses that plague each of their nations for centuries but each ruler has a secret. And to break these curses, one of the rulers must die.

Isla is the ruler of the Wildling, a realm of beautiful people who are cursed to kill anyone they fall in love with. Her people are counting on her to succeed in order to stop their years of suffering.

Now, Isla must lie and cheat and do unimaginable things to win, not to mention how love begins to complicate things more. Pick up Lightlark for a fantastical adventure, perfect for fans of Legendborn.

Books like Legendborn are full of magic and love and betrayal. I hope one of the books above will satisfy your craving for a thrilling fantasy!

Are you looking for some more books that are similar to Legendborn? Have any recommendations that didn’t make the list? Let us know in the comments! 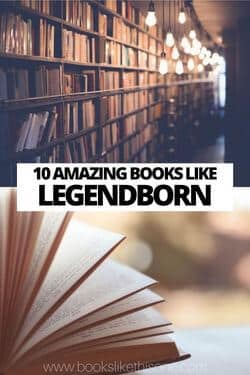