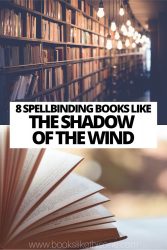 Looking for more books like The Shadow of the Wind? Then look no further than this list of equally spellbinding novels like the first in Carlos Ruiz Zafón’s series The Cemetery of Lost Books which centres around a library of forgotten books and a writer whose back catalogue of work sparks a literary manhunt.

The Cemetery of Lost Books can be found at the heart of Barcelona and houses obscure, unappreciated titles long since out of print. A young Daniel Sempere is brought there one day by his father where he is allowed to pick one book, the book he selects is ‘The Shadow of the Wind’ by a Catalan author called Julian Carax.

Over the years that follow, Daniel becomes increasingly interested in Carax and resolves to find out more about him, little realising that in doing so he would unleash some dark forces and become embroiled in a race against time to uncover the truth behind the elusive author.

A story within a story, Ruiz Zafón’s The Shadow of the Wind has become an international phenomenon, as have many of the books which follow below, be prepared for literature at its most immersive, atmospheric and bewitching.

The Pillars of the Earth, by Ken Follet

Our first book like The Shadow of the Wind is Ken Follet’s The Pillars of the Earth, book one from his compulsive Kingsbridge series.

Set in an extraordinarily described Medieval England with its vast forests, castles and walled towns, Pillars tells the story of a monk who aspires to build a glorious Gothic cathedral, the greatest the world had ever seen.

The building site of the cathedral weaves an epic story of love, betrayal, revenge and struggle between the local townspeople and those involved with erecting the extravagant building. As readers, we become submerged in Kingsbridge and the lives of all the characters and their interlinking narratives.

From the public execution of an innocent man and the ravages of battle to witchcraft and the embarrassment of a king, Follet himself has an extensive catalogue of books that have made him well known for his suspenseful plots and The Pillars of the Earth is no exception.

Have you already read this epic novel? Check out our list of books like The Pillars of the Earth!

Cathedral of the Sea, by Ildefonso Falcones

From 12th-century Britain in our last book, we are now back in Barcelona for our next captivating novel like The Shadow of the Wind, it is Cathedral of the Sea by Ildefonso Falcones.

Like the aforementioned Pillars of the Earth, Falcones’ 2006 historical novel centres around the construction of a rather impressive building, the Santa Maria del Mar, a church being built by the people for the people. By the time Arnau Estanyol, a poor orphan, arrives in Barcelona the work on the cathedral has already begun.

Arnau is quickly adopted and finds work as a stonemason helping construct the building while his adopted brother Joanet studies to become a priest. Arnau’s is a rags to riches story, he begins work on the Santa Maria del Mar a slave boy and finishes it a nobleman. But in a city where the Inquisition runs riot, is anyone able to keep a secret?

Cathedral of the Sea is a story of love and war, hope and despair, friendship and betrayal – it is a story not to be missed!

Novelists and their novels like The Shadow of the Wind take us on a trip around the world, (sometimes on a trip round another world altogether), and our next book does both.

Haruki Murakami, one of Japan’s most highly regarded authors, transports readers to Japan and into a strange sort of underworld in his gripping novel The Wind-Up Bird Chronicle.

Set mainly in suburban Tokyo, we meet Toru Okada a man leading a seemingly mundane life, working an unfulfilling job and married to a woman who grows more distant as the days go by. When their cat goes missing, Okada vows to find it hoping this chivalrous act will regain some proximity to his wife.

Unwittingly, Okada’s search leads him into a strange netherworld and forces him to cross paths with a host of peculiar people, each with their own interesting stories to tell… Murakami has an impressive imagination and The Wind-Up Bird Chronicle rivals some of his prior and incredibly popular novels, it is gripping, layered and multifaceted with equal measures of humour, menace and prophecy, it is a must-read.

One Hundred Years of Solitude, by Gabriel García Márquez

Our next author is one who influenced the sub-genre known as magical realism with his landmark 1967 novel; it is Gabriel García Márquez and One Hundred Years of Solitude. Jose Arcadio Buendia founded the town of Macondo, a utopia he dreamed about one night following his escape from his hometown Riohacha, Colombia.

The novel centres around the several generations of the Buendia family and this little town Jose built.

At one point secluded, surrounded by water, forestry and mountains the Buendia family lived a solitary life apart from an annual visit from a band of travelling gypsies who showed them advancements from the outside world, advancements which make Jose increasingly nervous. Over time, Jose is driven steadily mad by the fear of outside intervention, sparking the decline of the fateful Buendia clan.

The conflict between our need for solitude and our need for love and attention is at the heart of this novel like The Shadow of the Wind along with deeper topics of political corruption, subjectivity of experience and how our past, present and future cannot be separated.

A hauntingly beautiful novel, One Hundred Years of Solitude is an atmospheric and spellbinding read.

The House of the Spirits, by Isabel Allende

Like the aforementioned One Hundred Years of Solitude, Isabel Allende tells the multi-generational story of the Trueba family in her 1982 novel The House of the Spirits.

Though starting with the generation before, the novel focuses on the patriarch of the Trueba family, Esteban — a stubborn, wildly political man –, his wife Clara — a canny clairvoyant — and their children Blanca, Jaime and Nicolas.

Despite how hard he tries, Estaban can’t control everything including people’s political views, beliefs and who his daughter falls for. He forbids Blanca from seeing Pedro Tercero, a childhood friend, due to his social standing and revolutionary ideals, but like any forbidden romance the couple can’t be kept apart for too long…

We follow the undoing of the Trueba family and their salvation in this captivating saga which spans decades, wars and political movements, love, fate and the fantastical. If you are looking for another book like The Shadow of the Wind to really get transported into then make sure you give The House of the Spirits a read next.

Umberto Eco’s 1980 debut novel The Name of the Rose is several different disciplines woven into one epic piece of fiction; it is philosophical, mathematical, historical, theoretical to name a few.

Set in 1327 where a Brother William of Baskerville has been asked to investigate the Benedictine monks of a wealthy Italian abbey who are suspected of heresy. Brother William’s investigation pretty swiftly turns into the hunt for a killer as his seemingly simple mission gets overshadowed by a string of bizarre deaths.

Brother William looks to the great thinkers of the past like Aristotle and Aquinas for insight as he tries to get to the bottom of what is going on at the abbey. Ferociously curious, startlingly astute, Eco’s debut novel is multifaceted and a real tour de force.

If you liked Daniel’s investigation into Julian Carax in The Shadow of the Wind then you are sure to enjoy this aspect of The Name of the Rose too.

If it is the literary aspect that has you on the hunt for your next book similar to The Shadow of the Wind then look no further than Markus Zusak’s evocative 2005 novel The Book Thief.

Never was Death busier than during the Nazi rule in Germany, where he cannily narrates the story of Liesel, the titular book thief. At her brother’s graveside, Liesel sees a book almost buried in the snow entitled ‘The Gravedigger’s Handbook’ she brushes it off and takes it, an act which kick-starts her love affair with books and the written word.

Pretty quickly she begins stealing books whenever she comes upon them, from the Nazi books burnings or the library belonging to the Mayor’s wife, a thrilling yet dangerous act, almost as thrilling and dangerous as hiding Jews in your basement, that is until you get caught.

The Book Thief is a compelling novel, beautifully written worthy of the many accolades it has won Zusak, it is an enduring and totally bewitching read.

Our last book like The Shadow of the Wind is by an author who often frequents the New York Times bestsellers list, Khaled Hosseini and his 2007 novel A Thousand Splendid Suns.

Spanning the last thirty years of Afghanistan’s volatile past, from Soviet invasions to Taliban reigns the lot, Hosseini’s novel tells the story of a set of characters thrown together by the devastating effects of war and old fashioned cultural traditions. Where love can be found in the darkest of places, where glimmers of happiness come and go with the wind, where life and raising a family don’t stop even in the throes of war.

Like many of the novels listed here, A Thousand Splendid Suns chronicles these characters lives across the decades making it easy to get absorbed into their situation during such an unforgiving period in Afghan history.

Heart-wrenching yet hopeful, this novel is a must-have addition to your bookshelf and to-be-read piles!

Have you already read this novel? Check out our list of books like A Thousand Splendid Suns!

These books like The Shadow of the Wind and others like them weave some elaborate tales which offer an immersive reading experience enough to escape from the outside world, they are enduring enough to be loved time and again.

Are you searching for more books similiar to The Shadow of the Wind? Have any recommendations that didn’t make the list? Let us know in the comments! 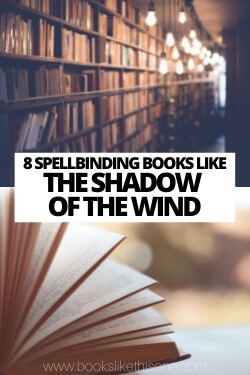