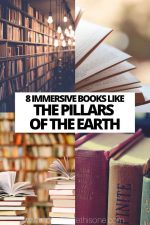 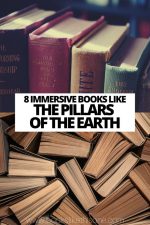 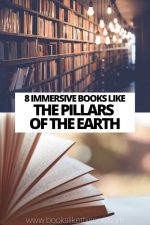 It’s easy to become so immersed in books like The Pillars of the Earth that you start to believe the alternative narratives they weave of well known historical events and of the stories we thought we knew so well.

In Ken Follett’s critically acclaimed novel, we are catapulted back into Medieval Britain somewhere between the sinking of the White Ship and the murder of Thomas Beckett.

The country is on the brink of a civil war but in the midst of it all, a spectacular cathedral is under construction in the fictional town of Kingsbridge. We get absorbed in the lives of the many, many characters linked to it’s creation over the intervening years in what becomes an epic story of struggle, love, deceit and revenge.

The Pillars of the Earth is the first novel in Follett’s Kingsbridge series, the books that follow are equally as enticing occurring during other notable events in history and involve descendants of some of the characters from Pillars.

The list of books compiled below take you on a journey around the world through history and guarantee to keep you occupied until Follett’s next Kingsbridge novel comes out later this year.

The famous battle of Agincourt is the basis of Bernard Cornwell’s exceptional book of the same name and, as in all books like The Pillars of The Earth, it makes for a truly gripping read.

Nicholas Hook is an English archer of exceptional skill, but his headstrong behaviour has him ruled an outlaw forcing him to seek refuge amongst the English mercenaries protecting the town of Soissons from French invasion.

Once word of his pivotal part in the Siege of Soissons gets out, he is called back to England and enrolled in the archer company of Henry V’s army. Henry V’s army is magnificent but sickness and injury from a disastrous defeat at Harfleur sees it depleted, yet they persevere against the odds to Agincourt on what everyone assumes is a march to their deaths…

Cornwell expertly expels myths surrounding the events and has a unique way of catapulting the reader right to the centre of the battle with alternating perspectives of both French and English soldiers. He has an incredibly convincing grasp of the battlefield and it is this which makes Agincourt a masterpiece in historical fiction.

The Paris Architect, by Charles Belfoure

If you like the architectural knowledge deployed throughout the pages of The Pillars of the Earth, then you are sure to enjoy those aspects of the Paris Architect by Charles Belfoure too, as they beautifully permeate his extraordinary novel.

Protagonist Lucien Bernard is a skilled architect living in Nazi-occupied Paris blissfully ignorant and uninvolved with the current conflict between the Nazi’s and Jews.

However, that soon changes when Lucien is approached to devise hiding places for Jews inside the buildings he designs, a decision which unwittingly sees him become part of the Nazi Resistance.

Lucien’s ingenious hiding places work well for a time but it isn’t long before one of them fails and is discovered by the depraved leader of the Gestapo, Colonel Schlegal.

Now it is impossible for Lucien to remain ignorant to the extreme cruelty the Jews face as he has to look for a hiding place a little closer to home to make amends for his design flaw.

Belfoure’s rich prose and convincing reluctant hero in Lucien makes The Paris Architect a remarkable novel which will captivate you until the very last page.

The Alienist, by Caleb Carr

Caleb Carr’s novel The Alienist became quite the phenomenon upon publication in 1994 spending six months on the New York Times Bestseller’s list and has since been made into a popular Netflix series starring Dakota Fanning and Luke Evans.

Carr thrusts us into the New York Gilded Age of 1886, amongst its opulent opera houses, gin mills, gangsters, corruption and soon a twisted spree of murders.

When the body of a horrifically mutilated young boy is discovered, psychologist (or “alienist” as they were referred to then),  Dr Laszlo Kreizler needs help piecing together a profile of the killer as they continue to target adolescent boys around the city.

He enlists the help of his friend John Schuyler Moore, a crime reporter, and together they embark on a Holmes and Watson-esque mission blended with Freudian insight to catch the killer once and for all.

A mile a minute novel set to enthral readers of novels like The Pillars of the Earth, The Alienist has all the makings of a modern classic and is also the first novel in a series surrounding Dr Laszlo and the developments in psychology and criminology.

Cathedral of the Sea, by Ildefonso Falcones

Cathedral of the Sea is another book that has become the basis of a popular Netflix series of the same name and explores many of the same elements that books like The Pillars of the Earth have become renowned for; love, war, revenge, history and architecture among others.

Ildefonso Falcones’ historical novel transports us to Barcelona during the 14th Century at a time when the city is torn between celebrating the construction of the cathedral of Santa Maria del Mar and evading the deadly Inquisition.

When protagonist, Arnau Estanyol arrives in Barcelona he quickly joins the guild of stoneworkers and helps to build the long-anticipated cathedral.

As time progresses, Arnau falls in love with a woman he shouldn’t and in an attempt to keep their relationship secret finds himself on the wrong side of the Inquisition. As the betrayal and treachery against him are revealed, Arnau fears he will die before getting to see the cathedral he’s devoted his life to creating.

Cathedral of the Sea takes you on a perilous journey through the grit and grime of medieval Spain – a truly absorbing epic!

A Bridge to the Sky, by Margaret Ball

A Bridge to the Sky is a fascinating story about a 13th-Century architect who dreamed in bricks and mortar and chronicles the creation of some of the most timeless monuments in Europe.

When Stephen of Dunwich and his mother Maude are exiled from their home under suspicion of witchcraft and sorcery, they seek refuge with the cruel and cold-hearted Brother Daniel amongst the Black Monks of Ely.

It is here Stephen learns the basics of architecture, building and stonemasonry despite Bother Daniel’s harsh methods of teaching. But when the convent becomes overrun with soldiers Stephen sees an opportunity for escape and doesn’t hesitate to take it.

This bid for freedom allows him to work as a builder for many different people in many different places, from Jerusalem and Cairo to France and Hungary helping to erect cathedrals and other prestigious buildings.

Margaret Ball’s A Bridge to the Sky is a perfect blend of history and drama and so richly textured that anyone who enjoys books similar to The Pillars of the Earth will find this novel equally compelling.

Most people know what happened to the inhabitants of the doomed city of Pompeii, yet Robert Harris offers a different perspective as we are placed within the city walls amidst the fear and hysteria in his thrilling novel Pompeii.

We follow Marcus Attilius Primus, an engineer who is called to Pompeii to take charge of the Aqua Augusta, the main aqueduct providing fresh water to millions of people.

With his predecessor mysteriously vanished, Atillius has to find out how sulphur has got into the water supply and why the springs are drying up causing the aqueduct to start failing. An investigation which will lead him on an expedition up Mount Vesuvius to uncover the source of the problem and the threat of so much more.

Harris is able to rival Follett’s artistry with words and rich historical detail which is why those who love books like The Pillars of the Earth will love getting lost in Pompeii too.

The Historian, by Elizabeth Kostova

Elizabeth Kostova’s eerie novel The Historian is the next novel on this list of books like The Pillars of the Earth which draws us into the history behind the legend of Dracula and how it relates to the modern-day world and is represented in literature.

When the narrator uncovers an ancient book and a pile of old letters, little does she know they will lead her on a quest throughout Europe to uncover a maze of intricate secrets about her heritage, as well as the history of Vlad the Impaler, the tyrannous villain behind Bram Stoker’s Dracula.

The letters, addressed to “My dear and unfortunate successor,” reveal how generations of historians before her (including her father) had put their reputations, sanity and ultimately their lives on the line in pursuit of proving what they believed to be true, that the reign of Vlad the Impaler was far from over.

Though not a horror novel, The Historian does bridge across many genres including Gothic, epistolary, adventure, detective and historical thriller, told in alternating timelines Kostova’s unique vision for her debut novel is impossibly bewitching.

Umberto Ecco transports us back to the Italy of 1327 for his intriguing and incredibly thought-provoking novel like The Pillars of the Earth.

The Name of the Rose questions the concept of truth and story telling as we follow Brother William of Baskerville and his mentee Adso of Melk on what is initially an investigation into heresy at a Benedictine Chapel.

Their investigation quickly turns into a murder mystery as a spate of unexplained deaths start occurring amongst the congregation. Brother William has to resort to the teachings of scholars such as Aristotle and Aquinas in a futile attempt to decipher the truth behind the strange goings-on at the Abbey and to help him crack codes and symbolic clues too.

Much like Follett, Ecco’s The Name of the Rose delves into the throes of medieval history but it is also layered with philosophy, theology and metaphysics which has the reader deciphering meanings just like Brother William.

Books like The Pillars of the Earth are often long reads but they are impossible not to get addicted to because the worlds and people they describe are so magnificently and intricately portrayed.

With historical events providing a burst of inspiration, they offer the reader an alternative perspective through their fiction demonstrating there is always more than one story to tell and more than one way to tell it.

Are you searching for more books like The Pillars of the Earth? Have any recommendations that didn’t make the list? Let us know in the comments! 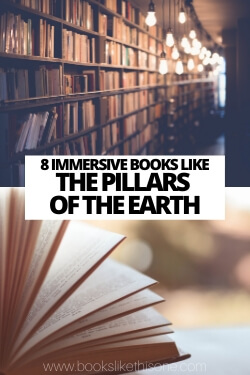